Europe Raises Security after London Attack | Europe| News and current affairs from around the continent | DW | 07.07.2005

Governments across Europe beefed up security on Thursday following a series of deadly rush-hour bombings in London, with police stepping up patrols in airports, rail stations and public transport systems. 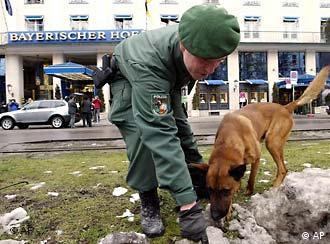 Police around Europe are on high alert after the deadly attacks

"The state of alert concerns all of Europe," Italian Interior
Minister Giuseppe Pisanu told reporters after a meeting of police officials and anti-terrorism experts in Rome.

Spain, France and Italy all raised their anti-terror alert levels following the explosions in London, which rocked both underground trains and a bus. Police said at least 37 people were killed and 700 injured.

A group calling itself the Al Qaeda Jihad in Europe claimed
responsibility for the attacks in an unauthenticated Internet
message, which also warned Italy and Denmark to withdraw their troops from Iraq. 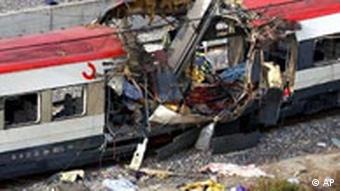 Debris lies next to a destroyed train car after a bomb, exploded in the Atocha railway station in Madrid Thursday March 11, 2004, killing at least 62 people. (AP Photo/EFE, J.J. Guillen) ** SPAIN OUT **

In Madrid, where 191 people were killed in a series of train bombings on March 11, 2004, Prime Minister Jose Luis Rodriguez Zapatero announced that "all alert and prevention systems" had been activated across the country. Spanish Interior Minister Jose Antonio Alonso ordered that the country be placed on the highest level of its anti-terrorism protection plan.

In France, Prime Minister Dominique de Villepin announced that he had ordered an increase in the country's anti-terror alert level to red, the second-highest rating.

Security was especially tight around the British embassy in Paris, as well as in Paris area airports and rail stations for
passengers travelling to Britain. The red level of France's Vigipirate security plan calls for random checks in trains, patrols on high-speed trains including Eurostar trains heading to London and airspace restrictions over certain sensitive areas. 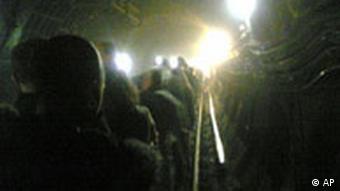 In this image provided by commuter Alexander Chadwick, taken on his mobile phone camera, passengers are evacuated from an underground train in a tunnel near Kings Cross station in London, Thursday, July 7, 2005.

French Defense Minister Michele Alliot-Marie immediately
announced the deployment of military reinforcements to "sensitive" sites across the country, including train stations and airports. Officials at Eurotunnel, the Franco-British company operating the English Channel railway tunnel, said British authorities had told them there was "no specific threat linked to the tunnel".

Berlin public transport officials raised their security alert level from "green" to "yellow", the mid-level rating, but noted they had no information about a possible attack in the German capital. German officials in the state of North Rhine-Westphalia also boosted security at British and US installations, including several British military bases.

German Interior Minister Otto Schily said he would travel to London in the aftermath of the deadly series of blasts said he would go to the British capital Friday to gain a better understanding of the situation.

Italy's Pisanu told the Senate that the country has raised its security alert level in line with other European states.

In Moscow, officials bolstered security in the metro system,
which has been the target of several attacks in recent years. In February 2004, a suicide bomb attack killed 42 people. 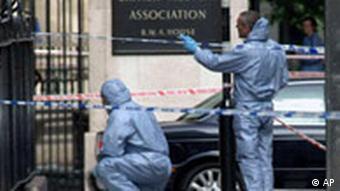 Police forensic experts at work in London's Tavistock Square after a bus was ripped apart by an explosion Thursday July 7, 2005. More than 33 people have been killed in four blasts across the capital Thursday. (AP Photo/PA, Sean Dempsey) ** UNITED KINGDOM OUT NO SALES **

Several European countries including Germany and Greece set up crisis units at their embassies in London, urging their nationals visiting Britain not to use public transport for the time being. Dutch officials heightened security patrols in and around ports that provide sea links to British destinations.

In the Czech Republic, authorities increased patrols in shopping centers and other buildings deemed sensitive, including power stations and the headquarters of the US-funded broadcaster Radio Free Europe.

Israeli officials immediately implemented a security clampdown at their embassy in London. "The embassy has been put on a state of alert and our staff have been told not to leave for now," Israeli foreign ministry spokesman Mark Regev told AFP.

Across the Atlantic, the United States raised its threat level
for mass transit and train systems to code orange or "high" -- the second highest rank on a five-point scale, Homeland Security Secretary Michael Chertoff said. Security was beefed up on the US railway Amtrak and on both the Washington and New York subway systems.

The explosions that rocked London on Thursday morning also sent shock waves across Europe, with governments stepping up security and offering their condolences to the people of Britain. Below, a round-up of reactions. (July 7, 2005)

The world's most powerful leaders had planned to start talks in Scotland on Thursday on aid to Africa and climate change, but the meeting was brutally overshadowed by a coordinated terrorist attack on London. (July 7, 2005)

Four explosions ripped through London's public transportation network on Thursday, killing dozens and injuring scores of others in a terrorist attack timed to coincide with the G8 summit in Scotland. (July 7, 2005)