London Hit by Terrorist Bombings | Europe| News and current affairs from around the continent | DW | 07.07.2005

Four explosions ripped through London's public transportation network on Thursday, killing dozens and injuring hundreds of others in a terrorist attack timed to coincide with the G8 summit in Scotland. 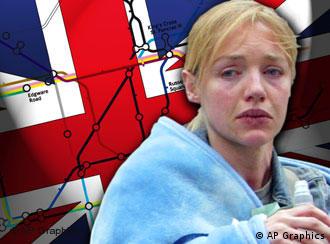 Experts said it was a matter of when, not if, London would be hit

Just one day before, Londoners had been elated over the news that their city was chosen to host the 2012 Olympic Games. But during rush hour on Thursday morning, that mood quickly changed to one of fear and sadness as it became clear that terrorists had struck at the heart of the British capital. 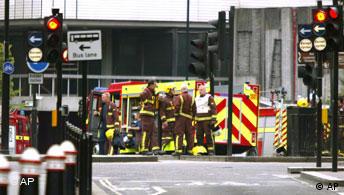 Police said four blasts ripped through the city's transport network -- three in the London Underground, and one on a double decker bus near Russel Square close to King's Cross train terminal. On Thursday evening, officials placed the number of dead at 37, and the number of injured at over 700.

Throughout the morning, dazed and injured commuters stumbled away from underground stations covered in blood and soot, visibly shocked.

"There was a loud bang and the train ground to a halt. People started panicking, screaming and crying as smoke came into the carriage," said Arash Kazerouni, 22, who had been travelling from Liverpool Street, which serves London's financial district. 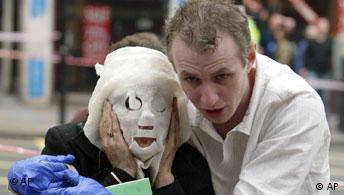 The explosion on the bus ripped the vehicle's roof off.

"I heard an incredible bang. I turned round and half the double-decker bus was in the air," one eyewitness said. "There must be a lot of people dead as all the buses were packed, they had been turning people away from the tube," she told the BBC.

"London is a center of Islamist propaganda in Europe," said German security expert Rolf Tophoven. "There have been permanent, massive threats since the involvement of the British government in the Iraq war. Let's not forget that the main enemy for the Islamists is the United States, and that's not just since Sept. 11, 2001 and Tony Blair is the closest ally of George W. Bush, so from that point of view it makes sense to hit the closest ally of the US. This is another parallel with Madrid." 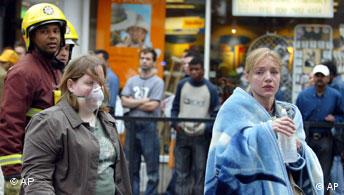 The attacks came as no surprise to the authorities, as for more than a year, police and politicians have warned that a terrorist strike on London was "inevitable." But the deputy assistant commissioner of London's police force, Brian Paddick, said there had been no intelligence and no advance warning that the attacks would happen on Thursday. 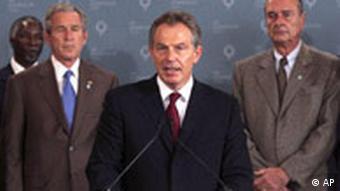 British Prime Minister Tony Blair broke off talks at the G8 summit in Gleneagles, Scotland and flew to London to address the nation.

Speaking from Downing Street, Tony Blair sent his "profound condolences" to the families of the victims and those injured in the blasts. He said he was proud of the way Londoners had reacted to the situation.

"It is through terrorism that the people who have committed this terrible act express their values, and it is right at this moment that we demonstrate ours," Blair said.

"It is a very sad day for the British people but we will hold true to the British way of life."

Blair was due to return to Scotland to continue the summit later.

As the day progressed in London, a stunned calm reigned over the normally bustling city as thousands of people took to the streets, forced to walk home because of the shutdown of public transport in the city center. 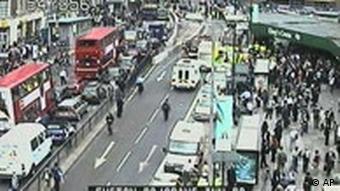 Traffic camera image from video over the Kings Cross station area in London after it was closed following an explosion, Thursday July 7, 2005.

In the United States, Homeland Security Secretary Michael
Chertoff said he had raised the threat level for mass transit and train systems to code orange or "high."

Security was stepped up in New York and Washington, still
jittery after the September 2001 attacks on the US by al
Qaeda, while the nationwide US rail system, Amtrak, also said it raised its security alert level.

Messages of sympathy and condemnations of the attacks poured in from leaders around the world.

A previously unknown group calling itself the Organization of al Qaeda Jihad in Europe claimed responsibility for the blasts and threatened similar attacks against Italy, Denmark and other "Crusader" states with troops in Iraq and Afghanistan.

In a statement posted on the Internet, but which could not be authenticated, the organization said: "Heroic mujahedins carried out a sacred attack in London... We have repeatedly warned the government and people of Britain and we have now fulfilled our promise."

Explosions in several underground stations and busses have plunged London into chaos. Several people have been injured, the number of dead still remains unclear. Get the latest information on DW-WORLD's live ticker. (July 7, 2005)

A year after the Madrid bombings, international leaders arrive in the city to discuss the on-going war on terror. The discussions may force the Europeans to take a long, hard look at their efforts since March 11, 2004. (March 8, 2005)