Europe Gets Tough on Immigrant Crisis | Europe | News and current affairs from around the continent | DW | 07.10.2005

Europe Gets Tough on Immigrant Crisis

The storming of Spain's border by African immigrants this week has turned the spotlight on the EU's response to a familiar crisis. Brussels is indeed moving to deal with the problem, but there's still a long way to go. 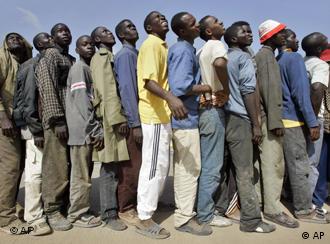 "Fortress Europe" may have become a cliche. But, for hundreds of African migrants who charged the razor-wire border at Spain's North African enclaves of Melilla and Ceuta this week and clashed with Spanish authorities in their desperate bid to enter Europe, the description could not have been more apt.

The drastic scenes at the Spanish border however aren't the first in Europe. Last year it was boatloads of poor African immigrants arriving on the shores of the Italian island of Lampedusa -- many close to death -- that served as a kind of "wake-up" call and upped the pressure on Brussels to confront the burning issue of illegal immigration in its southern member states.

Though the current refugee crisis in Melilla and Ceuta on the Spanish border has its roots in a border dispute between Spain and Morocco and in a narrow territorial sense is a purely 'Spanish' problem, migration experts say there's no question that the EU has to intervene.

African immigrants in a Spanish center

"The European Union has to seek a common answer to the problem. Ceuta isn't just a Spanish problem, but a European one," said Karl Kopp, expert on European asylum and migration at the Proasyl refugee organization in Frankfurt.

EU on the path to slow progress

Kopp says the only way to prevent horrific scenes like the one unraveling on the Spanish border is by creating a humanitarian EU-wide common asylum and immigration law -- something the EU has repeatedly failed to agree on thanks to entrenched differences between member states who insist on formulating their own national policies.

At the same time, experts admit that in the face of the repeated tragic attempts by refugees to enter Europe, Brussels has begun to acknowledge that the problem isn't simply going to go away and has begun changing tack as well as taking tentative steps to address the issue. 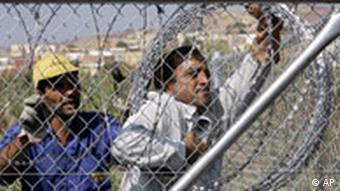 "We need a whole bunch of fair and efficient regulations for immigration and asylum procedures. These have to fight illegal immigration and enable resettlement," said Friso Abbing, press spokesman at the EU Justice and Security Commissioner Franco Frattini's office at a press conference this week.

"And above all, it's the cooperation with countries of origin and transit nations that's important in order to steer the migration flood."

The latter in particular has been a focus of EU efforts to fight illegal immigration in recent years within the framework of the so-called "Mediterranean Partnership."

The main idea is to get the north African nations of Morocco, Algeria, Libya, Mauritania and Tunisia to take back their illegal immigrants in return for more EU aid to create jobs and infrastructure so that people remained rather than tried to get to Europe.

In the current Spanish case, the EU has already sent a team of experts to Morocco to examine the country's border control efforts and offer Rabat 40 million euros to beef up border controls following requests by the Spanish government.

The EU already has such "resettlement agreements" in place with Albania, Sri Lanka and Hong Kong and is currently negotiating with Morocco, Turkey, Ukraine, Algeria and China.

But the agreements aren't uncontroversial. Refugee and human rights groups criticize that handing over people to countries with known records of human rights violations is unforgivable and a breach of the Geneva Convention on Torture.

"Nobody disputes that all African countries -- whether it's Libya or Morocco --use torture and other completely unacceptable methods and have miserable human rights standards. So an immigrant is completely defenseless," said Kopp.

Earlier this year, Italy hammered out a "resettlement agreement" with Libya and Spain is attempting to reactivate a similar accord with Morocco.

A further EU plan plays on the idea of providing help at the source of the problem and foresees setting up refugee centers, where refugees can find accommodation and counseling.

Pilot projects are in the pipeline in Ukraine, Moldavia, Belarus and Tanzania.

While most agree that the European Union has indeed begun to broadly tackle the problem of illegal immigration, some suggest that the popular perception of immigrants needs to be changed for there to be a real impact.

"No matter what people tell you in Europe, the fact is that most of these illegal immigrants are needed here and they aren't going to overstretch our capacities," said Kopp.

Dieter Oberndörfer, a migration expert at the University of Freiburg said it would be naive of the EU to think that it could keep immigrants at arm's length by increasing funds and development aid to Africa.

"Along with money, even the political conditions in African countries need to improve so that the people may want to remain there," Oberndöfer said.

"The problem of illegal immigration is going to keep rising in the future. The EU should instead start considering how it's going to distribute the burden of taking on the immigrants among its members."

Spain has started deporting illegal immigrants despite concerns about possible human rights violations while a new assault on the Spanish border by African immigrants resulted in six deaths. (Oct. 7, 2005)

A survey conducted by the European Union’s racism watchdog has revealed waxing intolerance among Europeans towards immigrants. (March 17, 2005)

An initiative in Germany wants to secure the basic rights of its around one million illegal immigrants. But, the country still lags far behind other EU countries when it comes to dealing with the issue. (March 10, 2005)