A German Amnesty for Illegal Immigrants? | Germany | News and in-depth reporting from Berlin and beyond | DW | 10.03.2005

An initiative in Germany wants to secure the basic rights of its around one million illegal immigrants. But, the country still lags far behind other EU countries when it comes to dealing with the issue. 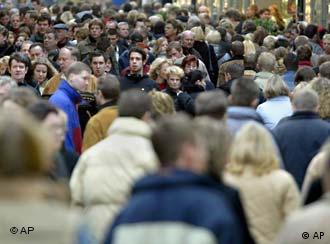 Romanian-born Maria came to Germany 12 years ago on a normal tourist visa. A trained technician, who was 20 at the time, she dreamed of a better life in Germany. Her visa expired, but Maria stayed on -- without health insurance and family. Today she works clandestinely as a caretaker for elderly people in private households and lives with the fear of being discovered and deported. 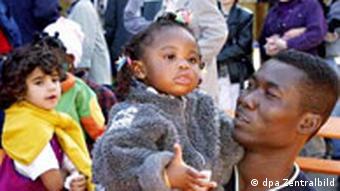 Her story, documented by the Protestant Missionary Association in Germany, is far from being an isolated one. Up to a million people in Germany are estimated to be living illegally in the country. They are people who overstay their visas, visit relatives and never return, or asylum seekers who go underground after their applications have been rejected. They come from the Balkans, Russia, Asia, Latin America and West Africa.

The problem was largely ignored during the political wrangling that marked Germany’s drafting of its first ever immigration law that came into force on Jan. 1 this year. But, now that the furor over immigration has subsided, the Catholic Church, which has long championed the cause of illegal immigrants, has drawn new attention to the issue.

Last week during its annual conference in Berlin, it issued a statement, signed by more than 370 prominent personalities in Germany, saying it wanted to raise public awareness of the problem.

“Illegal migration is simply not a public topic in this country. Until now it’s only been debated behind closed doors and among fringe groups of social workers and church organizations. That has to change,” said Jörg Alt, sociologist, migration expert and head of the Catholic Forum on Illegal Immigration.

But getting more people, especially policy makers, interested in the topic is only part of the problem. Without documents and registration papers, most immigrants are cut off from even the most basic of services such as health care or education for their children. 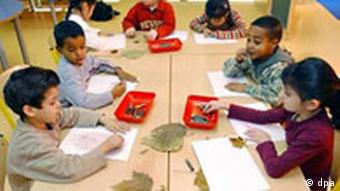 Children of foreign origin learn German in a Frankfurt school

The problem is exacerbated in Germany because of a clause in the immigration law which makes it mandatory for public institutions such as schools and hospitals to pass on information about illegal immigrants to social affairs offices. Doctors, priests or social workers who helped undocumented persons access basic services risk penalization.

"That's a huge hurdle for illegal immigrants who might need urgent medical care but are held back for fear of being detected and deported," said Sabine Leutheusser-Schnarrenberger, former justice minister and parliamentarian for the opposition Liberal Democrats and one of the signatories to the manifesto on illegal immigration.

The group is now demanding an unambiguously worded addition to the immigration law that would strike the punishment clause for those offering humanitarian aid to illegal immigrants and secure them access to medical care, education for their children and protection from exploitation.

While the debate on illegal immigration in Germany still centers on stressing basic rights for illegal workers, other European countries grappling with the same problem have made rapid progress. 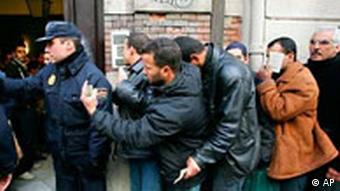 Police control a queue of immigrants outside the Moroccan consulate in Valencia, Spain.

Most recently, Spain -- a country that has overtaken Germany in the past few years in attracting the largest number of immigrants to its shores -- has begun offering its illegal immigrants the prospect of legalizing their status if they can show a six-month work contract or one of three months if they work in the agricultural sector.

Experts say that the move doesn't just make life easier for those working clandestinely, but also hold obvious benefits for the host country.

"Countries like Spain are much more pragmatic in their approach to illegal immigrants," said Karl Kopp, an expert on European migration at Proasyl, a group working for the rights of asylum seekers. "The immigrants in turn pay into social and tax coffers, fill in jobs that aren't usually taken up by locals and contribute towards stemming falling birth rates."

Kopp pointed out that countries like Italy, Greece and Portugal have periodically legalized their illegal immigrants.

But such ideas face a great deal of resistance in Germany, since many people fear that an amnesty would lead a large influx of foreigners who would take away jobs from Germans, no small issue in a country with an unemployment rate of over 12 percent.

Despite the benefits that legalization of illegal workers could bring, experts say it wouldn't stand a chance in Germany. "While countries like Spain are already talking about legalization, in Germany we first need to start a debate," said Alt.

While German law forbids an amnesty for illegal workers of any kind, it's deeply entrenched attitudes that would need changing first.

"We need to do some serious catch up with our neighbors," admitted Leuthheusser-Schnarrenberger.

Karl Kopp of Proasyl said Germany, as a modern country, should be able to carry on a debate on immigration, but so far has not really tackled the issue. "It's a pity because we know that in today's world there can be no dynamism in a society without immigration," he said.

After much wrangling with the opposition, the German government drew up an immigration law to regulate migration last year. From Jan. 1, 2005, things have changed for foreigners. (Jan. 1, 2005)

Despite a lukewarm reception in the EU, Berlin and Rome intend to press ahead with a controversial plan to create holding asylum camps for European-bound migrants in North Africa as a means to combat illegal immigration. (Oct. 13, 2004)

Immigration into Germany in the year 2003, for the first time in many decades, dropped below 800,000 as the influx of foreigners throughout the 1990s has receded, according to government statistics released on Monday. (Jan. 18, 2005)