Eurofighter crash leads to calls to end military exercises | Germany| News and in-depth reporting from Berlin and beyond | DW | 25.06.2019 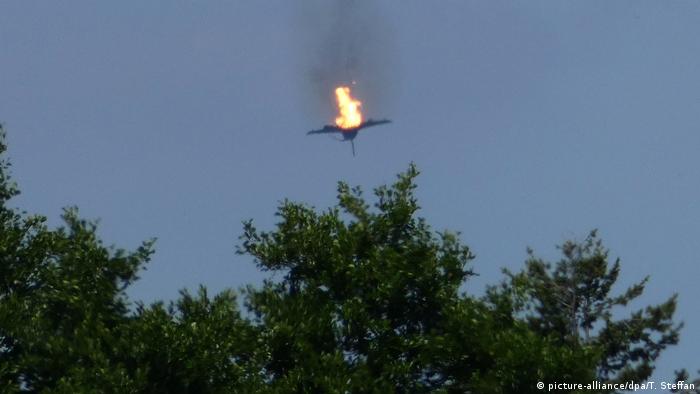 The mayor of Waren an der Müritz, a small town near the site where two German Eurofighters crashed on Monday, has called for a ban on military exercise flights over "holiday regions."

The two Typhoon class planes collided near Lake Müritz in the state of Mecklenburg Western-Pomerania, about 120 kilometers (75 miles) north of Berlin. The area is home to a national park and considered a popular holiday destination in the region.

"A lot of tourists cannot understand that around Müritz, of all places, such low flights have to be practiced," Mayor Norbert Möller told Germany's DPA news agency on Tuesday, indicating that, in different circumstances, the planes could have hit people on the ground.

"You don't want to think about [what could have happened], but we got away with a black eye there," the Social Democrat politician said, before sending his condolences to the family of the pilot killed in the incident.

Another local mayor, Christian Democrat Almuth Köhler of Silz und Nossentin, called for a reappraisal of where low-altitude flights are practiced. She pointed out that the campsites in the area were all booked out at the time of the crash. 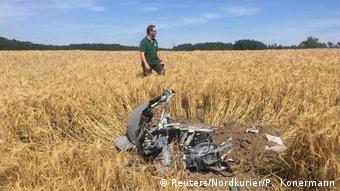 Meanwhile, the socialist Left party in the state of Mecklenburg Western-Pomerania called for all air force exercises in the region to be stopped, on the grounds they were unnecessary.

But Henning Otte, defense spokesman for Angela Merkel's Christian Democratic Union (CDU), defended the exercises, telling the Deutschlandfunk radio station, "The Bundeswehr must practice where it would have to defend in an emergency."

Otte was also one of many politicians who refused to speculate on the cause of the collision on Tuesday, among them Defense Minister Ursula von der Leyen, who visited the crash site on Monday evening, praising the work of first-responders.

One pilot was killed in the collision, while the other survived with injuries, and is expected to recover. Some 300 German soldiers spent the night searching the area for debris, as the Bundeswehr begins its investigation. The military told locals to stay clear of the plane parts, which are scattered several kilometers apart.

Thomas Wiegold, journalist and military expert who specializes in the Bundeswehr, told TV station RTL that it was less likely that a technical problem led to the crash. He added that such standard exercises, which happen several times a week, involve simulated aerial dogfights (without ammunition). "They face each other, and try to shoot each other down, or get into a shooting position," he said. "And sometimes they have to carry out very risky maneuvers."

The German air force tweeted on Tuesday afternoon that the pilot killed in the crash was 27 years old and had 400 hours flight experience. The pilot who survived was more experienced, with more than 3,700 flight hours under his belt. 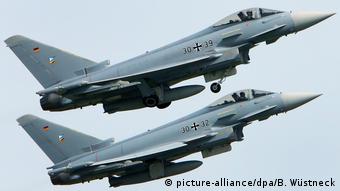 The Bundeswehr has 140 Eurofighter Typhoons, which are jointly manufactured by a consortium of defense contractors from Germany, Britain, Italy and Spain at a cost of more than €100 million each ($114 million). First built in 1994, some 500 planes are now used by seven countries, including Austria, Oman, and Saudi Arabia.

The planes that crashed on Monday were among the 25 Eurofighters belonging to the "Steinhoff" squadron, stationed near Rostock, northeastern Germany. Like many pieces of Bundeswehr hardware, the plane has been hampered by a lack of spare parts in recent years, which meant many were grounded for months in maintenance. Last year, Der Spiegel reported that the Bundeswehr had only four Eurofighters combat-ready.

In 2015, Germany temporarily stopped taking the new Typhoons, over technical concerns. That year, the ministry said around half the planes were combat-ready.

This has had a knock-on effect, with pilots sometimes failing to rack up the mandatory flight hours: 140 a year. But on Tuesday, the Defense Ministry said that 60 percent of the planes were operational, a figure that was rising, and that the Eurofighter was the safest plane in the Bundeswehr's history. Monday's collision is thought to be the first crash the plane has suffered in Germany since 2004.

The German military has put on a major display for the chancellor to show off its NATO commitment. Speaking to soldiers, Angela Merkel underlined the importance of showing the alliance was ready to defend its territory. (20.05.2019)

Germany's Bundeswehr has halted its military training exercises in Iraq amid heightened tensions in the region. The US has put troops on high alert and removed nonemergency diplomatic staff from Baghdad and Erbil. (15.05.2019)