After Benjamin Pavard's head injury in France's Euro 2020 win over Germany, questions are being asked about UEFA's concussion protocol. The governing body has asked France to explain its response to the incident. 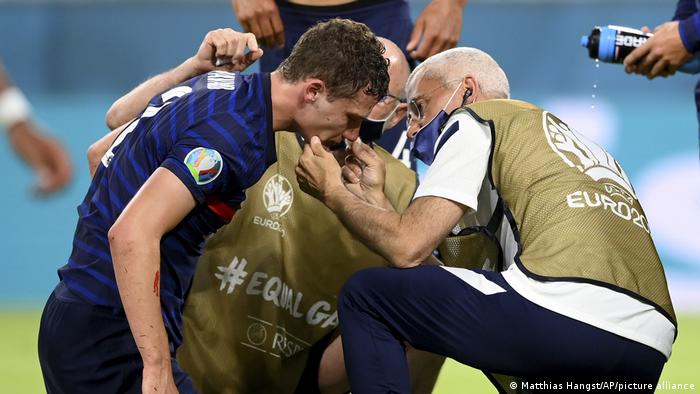 As Benjamin Pavard lay motionless on the pitch during the match which saw France defeat Germany 1-0 on Tuesday, there was reasonable evidence that he had possibly been knocked out.

But the response from France's medical staff has been described as "sickening to watch."

The medical team sprayed the defender with water and did a quick on-field assessment, all under the watchful eyes of both the referee and a crowd of France players surrounding them.

After less than three minutes, Pavard was given the all-clear to continue, which brain injury charity Headway labeled as "disturbing." 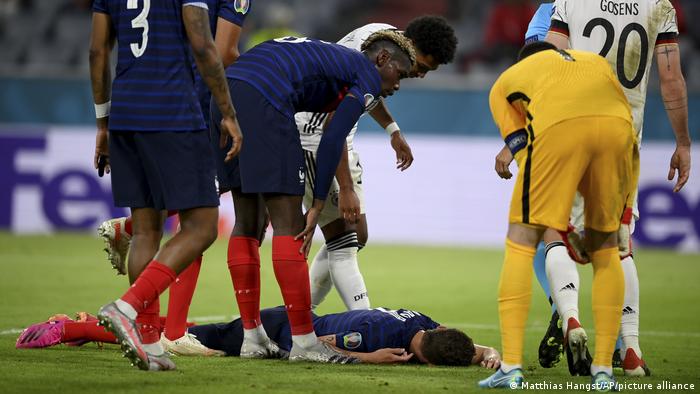 Pavard would later confirm to reporters that he had been "knocked out for 10 to 15 seconds."

For Headway chief executive Peter McCabe, it was yet "another example of football authorities failing to protect the short and long-term health of a player."

"We have continuously been told that football's concussion protocols are fit for purpose and that temporary concussion substitutes are not necessary," he said.

"But … it is simply not credible to suggest that concussion could not be 'suspected' or a possible consequence of the impact."

The global footballers' union FIFPro has asked UEFA to explain the incident.

Meanwhile, UEFA has contacted France to find out why the concussion protocol was not followed.

A charter was announced before the tournament, with all 24 teams signing a commitment to take a series of measures to improve the care of players who suffer a suspected on-pitch concussion.

It was supposed to signify an "encouraging step forward" that aligned "with some of our requests in recent years," FIFPro said in reaction to the announcement.

Questions about player welfare have already been raised at the tournament after Christian Eriksen suffered a cardiac arrest during Denmark's loss to Finland on Saturday. For Headway, the Pavard incident further highlights the need to introduce temporary substitutions to protect players with suspected concussion.

"It appeared that the referee was attempting to speed up the medical team and usher them and the player off the pitch, rather than allowing them the time they needed to assess the seriousness of the injury," McCabe said.

"The way this incident was handled was sickening to watch," he continued. "Why is it so hard for football to accept it has got this wrong and follow the example set by other sports by introducing temporary concussion substitutes?

"UEFA has to come out and immediately explain how it was allowed to happen and what action it will now take to ensure something similar does not occur in the future."

Germany international Christoph Kramer was knocked out in the 2014 World Cup final against Argentina and has admitted he can't remember playing. At one stage during the incident, he asked the referee, "Is this the final?"