EU 'will have to talk' to Taliban, but wary of recognition

EU foreign policy chief Josep Borrell said the bloc would need to talk to the Taliban after the group seized power in Afghanistan. However, he said, Brussels would reserve judgment before recognizing their rule. 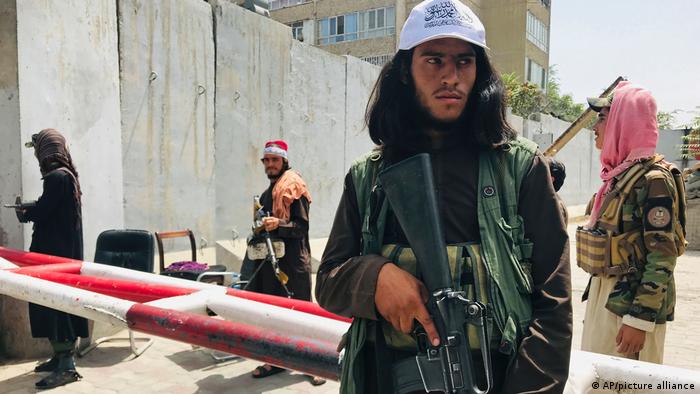 While the Taliban have said they will not seek revenge against opponents, many are wary of those words

The European Union will have to speak to the Taliban, but any cooperation will depend on whether Afghanistan's new rulers respect fundamental rights, the bloc's foreign policy chief, Josep Borrell, said on Tuesday.

The comments came after an emergency meeting of EU foreign ministers to discuss the latest events in Afghanistan.

As the meeting took place, the Taliban held a press conference where they declared a general amnesty and insisted they would not seek "revenge" against opponents.

Those promises were met with global skepticism.

What did Borrell say?

Borrell told a news conference that, while the bloc would engage pragmatically with the Taliban on humanitarian issues such as allowing people to leave the country, it would not necessarily recognize their rule.

"The Taliban have won the war, so we will have to talk with them," he said. "We will deal with Afghan authorities such as they are, at the same time remaining naturally vigilant."

"I haven't said that we are going to recognize the Taliban," Borrell stressed.

"I just said that we have to talk with them for everything, even to try to protect women and girls," he said. "Even for that, you have to get in touch with them."

"We will put conditions for continual support, and we are going to use our leverage ... to make the human rights to be respected," he said. "I know that when I'm saying that it looks a little bit wishful thinking. But we will use all our leverage."

Borrell said the priority at present was the evacuation of EU citizens and Afghan staff who had helped the failed NATO effort, after chaotic scenes at Kabul airport.

Also speaking after the meeting, German Foreign Minister Heiko Maas said the West would judge the Taliban "by their actions."

"What's important is that this transition phase will be peaceful and that will depend on what the transition government actually does as soon as it's in place, in terms of whether we can believe their statements," Maas told reporters.

He said Germany was in talks with the US on the issue of evacuations, in the hopes of pressing US representatives who are in discussion with the Taliban in Doha about obtaining safe passage for Afghans to the airport.

Maas said a German diplomat would also be dispatched to Doha to join talks.

The foreign minister earlier said Germany would suspend development aid to Afghanistan in light of the Taliban's victory.

After the ministers' meeting, the EU confirmed that it was also suspending development payments until the situation could be clarified.