The tobacco industry is up in arms over proposed tough EU guidelines for the sale of cigarettes to protect consumers. Among the plans are explicit pictures showing the dangers of smoking. 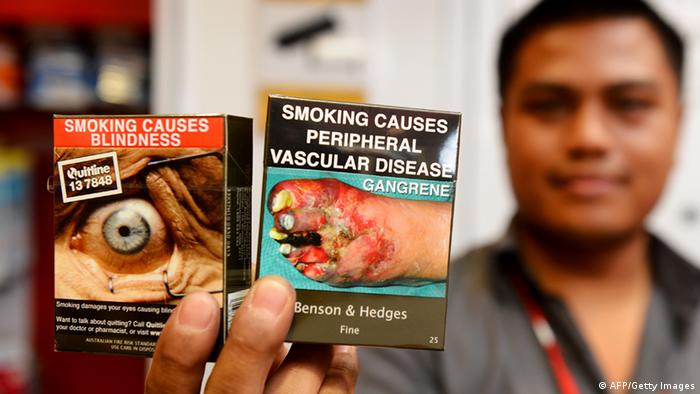 "Imagine that a jumbo jet with 300 passengers crashed every day. People just wouldn't fly anymore," said Martina Pötschke-Langer of the German Cancer Research Center. Some 110,000 die of smoking-related diseases very year, according to the center.

But that doesn't deter many smokers. "The addiction is just too great," Pötschke-Langer added.

A quarter of all German adults regularly light up. The figures are even higher elsewhere: in South Korea, Russia or Bangladesh more than half of all adults smoke.

In Germany, smoking has been a topic of intense debate for years. The smoking ban in bars and public buildings still triggers emotional debate. Each state has enacted its own ban.

In the last couple of days, German media outlets have begun speculating about the European Union's new Tobacco Directive. The European Commission's Directorate for Health and Consumer Affairs is set to present the Directive to the public on Wednesday (19.12.2012).

It's likely that cigarette packets will soon have to display shocking pictures which graphically underline the dangers of smoking.

The most common smoking-related diseases are lung cancer, chronic lung diseases and cardiovascular diseases that can lead to heart attacks and strokes. Australia, Canada and Brazil already have legislation requiring graphic images on cigarette packaging. The text "Smoking causes mouth cancer" accompanied by a photo of a person suffering from the cancer are combined on the package. So far, packs of cigarettes in Germany have been required to bear written warnings such as "smoking kills." 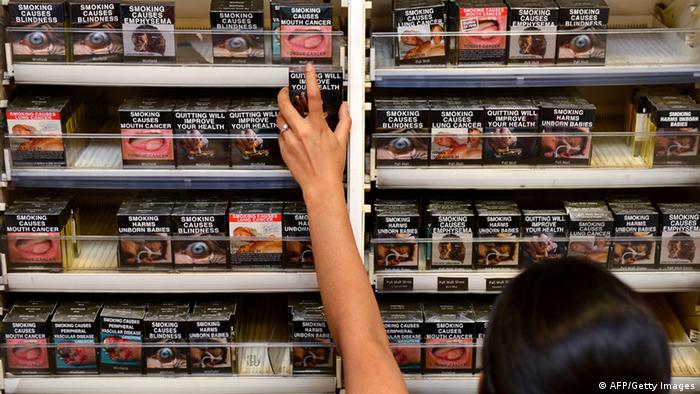 Graphic images on cigarette packs have been shown to be effective

"It is an enormous change," Dirk Pangritz of the German Cigarette Association said of the information on the EU rules he had read about in the media.

According to reports, as much as 75 percent of a pack of cigarettes would be covered with written and photographic warnings. "There is not much room left for the actual brand," Pangritz told DW, adding that he found the plans were "no longer bearable." If the EU's proposal goes through, the Reemtsma tobacco company has said it would take legal action against the rules.

Despite the criticism, Pangritz said his association, which represents several tobacco companies, is aware of its responsibility to consumers. The association, he said, supports businesses to ensure tobacco products are not sold to anyone under 18.

Photos are effective, she said, adding, "We have seen in studies that warnings with pictures increase the likelihood that people will stop smoking."

She also disagreed with the tobacco industry's argument that all smokers already know about the health risks associated with smoking.

"People with poorer education in particular are deprived of the information," she said.

As people who have smoked for many years have grown accustomed to the warning texts, Pötschke-Langer said it made sense to change the strategy once in a while. "Warning notices are an effective and cost-efficient means of communication since they directly reach every smoker," she added. Pangritz of the tobacco industry says things are going too far

But tobacco is not the only unhealthy product on the market. It's also unhealthy to consume large amounts of sugar or fat. That puts tobacco companies in the same boat as other industries, Pangritz said.

"Imagine if soft drinks could only be sold in one kind of bottle," Pangritz said, adding that it would destroy brands.

Tobacco, Pötschke-Langer countered, deserves to be kept in a class of its own.

"Tobacco is unique in that half of all smokers' deaths are related to its consumption - that's not the case for any other product," she said, adding that sugar becomes unhealthy only in large amounts while smoke damages the body from the first whiff.

Throughout Germany, smoking is banned in public buildings, on public transportation and other places. But you can still have a puff in some bars. Some see Bavaria's stricter rules as an example for the rest Germany. (31.08.2012)

Die-hard smokers in Germany may soon no longer be able to smoke during working hours, neither outside nor in the office. Some employers now want to do away with smoking breaks completely to boost productivity. (13.01.2012)