EU foreign ministers in Brussels addressed a wide range of issues and pledged support for a number of crisis spots around the world. By doing this, the EU wants to present itself as a global player. 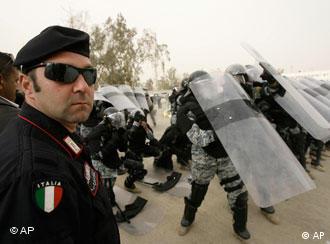 European Union foreign ministers agreed on Monday to send a 300-strong police force to Haiti to help provide security for the distribution of aid.

The suggestion to send highly-trained members of the EU's militarized police force, the European Gendarmerie Force (EGF) to provide security in Haiti was made by France at meeting of European Union foreign ministers in Brussels. France and Italy are to provide 120 to 140 officers each from the EGF, the rest will come from Spain. The Netherlands is expected to provide about 60 officers while Romania is still considering sending support. Portugal has not made any commitments.

The EGF is special unit of around 800 highly mobile militarized police forces including Italy's Carabinieri, France's Gendarmerie and Spain's Guardia Civil. The forces do not answer to the police but to the military. The forces are set to arrive in Haiti within the next few weeks and are expected to stay for six months. 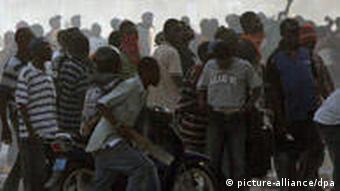 Germany is not providing personnel since its constitution does not allow militarized troops to provide policing. German Foreign Minister Guido Westerwelle stressed that Berlin has already made 15 million euros ($21 million) in aid available for Haiti.

"The most important thing is that help arrives," said Westerwelle.

A force of 300 personnel is tiny compared to the thousands of American soldiers already there. The Europeans want to help in a much broader way. Karel De Gucht, EU Commissioner for humanitarian aid, saw for himself what is needed in Haiti.

"The Haitian state strictures have not only been physically destroyed in terms of buildings, but also in terms of administration, which has been decapitated," said de Gucht.

To avoid a doubling-up of efforts, the EU will establish coordination cells both in Brussels and Haiti.

The foreign ministers have also been preparing for the Afghanistan conference in London that begins on Thursday. Public pressure is growing in most EU to withdraw troops from Afghanistan, but Sweden’s foreign minister Carl Bildt warns that caution is needed.

"I would not be looking at any exit dates," said Bildt.

Westerwelle repeated his suggestion in Brussels, one which has been derided in the German press, which is to offer Afghan insurgents an incentive to turn against extremism. 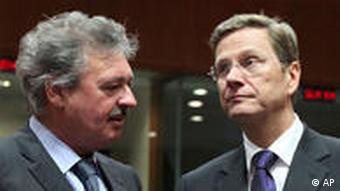 "Above all, it's important to re-integrate back into society those allies of the Taliban who have taken the wrong path for economic reasons," said Westerwelle.

"We should give them an economic perspective, through employment, for instance. To do this, we will to establish a fund."

Critics say this will at best amount to waste of money, and in the worst case scenaria, would finance terrorism.

EU foreign ministers also agreed to send about 100 trainers to help build up a Somali army. The training is to take place in Uganda because Somalia itself is considered to be too dangerous.

The EU already has a naval mission patrolling the Somali coast, but most security experts say Somalia's problems can only be solved on land.

European Affairs Minister Pierre Lellouche of France urged the EU to prepare new sanctions against Iran given Tehran's refusal of all offers of a solution from the West.

"We have been in talks for six years. If we listen to the Iranian spokesman they are reaching 20 percent enrichment of uranium in Iran, which is the "threshold to militarization," said Lellouche.

"The sanction instrument is a very blunt one so it should be used with extreme care. Our aim is to get the Iranians to the negotiating table and have a political solution," said Bildt.

It is impossible to establish such an aid operation overnight, UN says

In a catastrophe like the earthquake in Haiti, the demands on rescue logistics are immense. Find survivors, treat the wounded, provide shelter, water and food - coordinating such aid is the job of one UN agency. (25.01.2010)

European Union foreign ministers have discussed a number of issues including the recent Afghan elections and forming closer ties with nations in the Southern Caucasus region. (15.09.2009)