The EU said Rosario Murillo, the first lady and VP, is one of 14 individuals responsible for "serious human rights violations" ahead of Nicaragua's election this year. 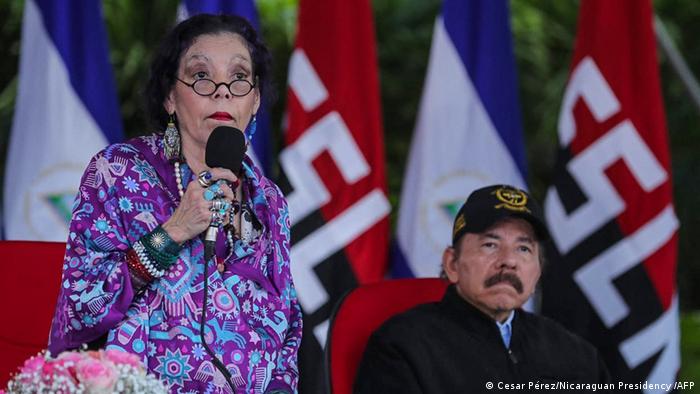 Rosario Murillo is both first lady and vice-president of Nicaragua

The EU announced on Monday that it has imposed sanctions on eight members of the Nicaraguan government, including Rosario Murillo, the country's vice-president and the wife of President Daniel Ortega.

In a statement, the EU Council said the sanctions applied to those "responsible for serious human rights violations in Nicaragua and/or whose actions undermined democracy or the rule of law."

"The political use of the judicial system, the exclusion of candidates from the elections and the arbitrary delisting of opposition parties are contrary to basic democratic principles and constitute a serious violation of the rights of the Nicaraguan people," the Council said.

The EU's move comes after the US recently applied sanctions on senior Nicaraguan officials and other members of Ortega's family.

Both the EU and US are responding to a wave of repression in the Central American country that has seen the arrests of several of Ortega's political adversaries, including presidential hopefuls, ahead of a November election.

A travel ban will apply

The EU Council said that some 14 Nicaraguans would be subject to an asset freeze, while EU citizens and companies are forbidden from making funds available to them.

A travel ban, which impedes them from entering or transiting through EU territories, will also apply to those sanctioned.

"Today's additional sanctions demonstrate that the EU continues standing ready to use all its instruments to support a democratic, peaceful, and negotiated solution to the political crisis in Nicaragua," the Council said.

The Nicaraguan president is seeking a fourth consecutive term in November's general election, the Sandinista National Liberation Front (FSLN) party said on Monday, with Murillo again as his running mate.

"We have our formula, our candidates were elected unanimously," said Gustavo Porras, an FSLN legislator, during the party congress.

The 75-year-old president first seized control of Nicaragua after his Sandinista guerrillas ousted the Somoza dynasty that had governed the country from 1937 to 1979.

He remained a fixture in Nicaraguan politics for 17 years after that and in 2006 was democratically elected. But since then, critics accuse him of authoritarianism, corruption and of again turning Nicaraguan politics into a family affair, much like the Somozas once did.

Amnesty International warned on Monday that Ortega had built a system of impunity likely to hamper fair elections this year.

"The road to the elections will be plagued by repressive actions implemented to make it impossible for the population to exercise their political rights without fear of reprisals," Amnesty International said in a statement.