The Council of Europe has criticized Hungary in a new report, condemning xenophobia and violence against migrants and minorities. The government of Prime Minister Viktor Orban denies any wrongdoing. 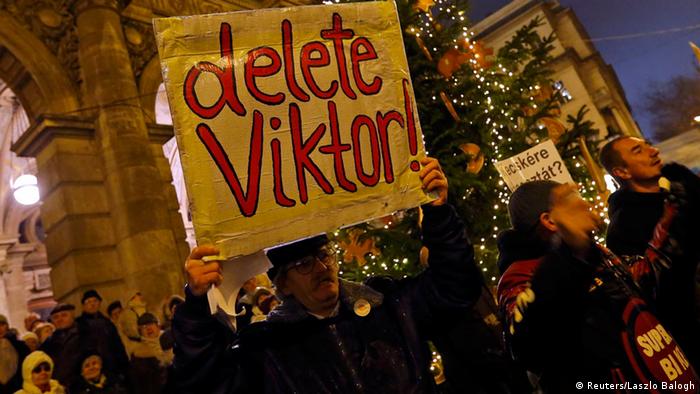 Migrants aren't welcome in Hungary. The government made that pretty clear with deeply leading questions in a national consultation. Sent out to 8 million citizens aged 18 or older, the survey compares Syrians fleeing civil war to "economic migrants." The survey also asks Hungarians whether they think that refugees should be deported, locked up or sentenced to forced labor during their stay in Hungary. That's just one recent example of the right-wing government's attitude toward migrants. 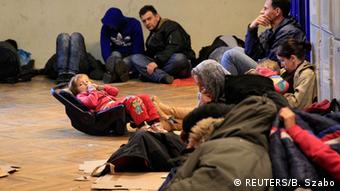 Refugees have an especially hard time in Hungary

Now, the Council of Europe has published a report that strongly criticizes widespread racism in Hungary. The authors, from the Council's European Commission Against Racism and Intolerance (ECRI), emphasize that not only is the radical nationalist Jobbik, the third-largest party in Hungary's parliament, to blame for the country's xenophobic atmosphere - the entire political spectrum shares in the guilt.

The ECRI report praises recent Hungarian initiatives like the introduction of a hate crime unit for police and a new network for consultants to assist Hungary's Equal Treatment Authority, which pursues cases of discrimination and racism. However, the report's authors have found, none of this makes up for the hatred and vitriol that Jews, homosexuals, Roma, migrants and other groups encounter.

The Hungarian government rejects the report as "incorrect" in several respects, alleging that it used "false and outdated information," especially concerning the situation of migrants.

Rights workers in Hungary say, however, that the government's response is what's incorrect. Marta Pardavi is the co-director of the Hungarian Helsinki Committee, an NGO that fights for refugees and human rights. She says that the ECRI report is based on extensive and factual documentation - and is even too positive, because it only describes the situation up to and including 2014. Since then, Pardavi says, things have gotten worse.

"The report praises policies for integrating immigrants," Pardavi told DW. "Meanwhile, refugees are presented as dangerous and problematic in Hungary and immigration as harmful and bad." 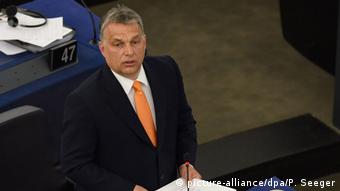 Orban has critics across Europe, as well as within Hungary

Prime Minister Viktor Orban, of the right-wing Fidesz party, doesn't want more immigrants in Hungary. He has called a plan to distribute applicants for asylum among EU member states "absurd, bordering on insanity."

In connection with the national consultation on immigration, the government has erected signs that tell refugees to respect Hungarian culture, follow the laws and not take jobs away from nationals.

"Of course the European Union can't do anything about the domestic campaigns of member nations' heads of state," Rudolf Ungvary, a writer who frequently criticizes Hungary's government, told DW. "It's a domestic spectacle. But the way he fights against EU refugee policy is very provocative."

In early June, Prime Minister Orban told the daily newspaper "Napi Gazdasag" that he wanted to protect the Hungarian people from "dying out." He said he opposed a multicultural society brought about by immigration: "We will do everything to save Hungary from that fate."

To stop people from coming into the country illegally, Fidesz officials said they were planning on tightening Hungary's border with Serbia. While there was no talk of a fence or similar enforcements, Fidesz Vice Chairman Lajos Kosa said that migrants "simply will not be allowed in." 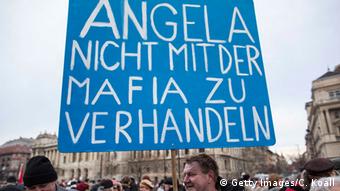 When Angela Merkel visited in February, protesters asked her not to do business with the "mafia government"

How democratic is Fidesz?

Antal Rogan, head of the Fidesz parliamentary group, said Hungary would like to go back to arresting everyone who entered illegally. According to the ECRI, about 22 percent of applicants for asylum are already "deprived of their liberty."

The writer Ungvary does not believe that the report will change anything about Hungary's political situation. He said that only "naive liberals" would believe that EU statements like this had any effect on the Orban government.

Ungvary added that the measures that ECRI praised in the report were democratic only on the surface: "The government is merely using them as window dressing," he said.

The European Commission has proposed a quota system regulating the distribution of refugees - and has run into tough resistance. But such a system must be implemented, writes Christoph Hasselbach. (13.05.2015)

Hungary heads to the right

Xenophobia, racism, and right-wing radicalism: Hungary's Jobbik party is only three percentage points behind the ruling Fidesz in recent polls. And the killing of Roma is greeted with indifference. (13.05.2015)