EU puts off talk of Schäuble proposals | Europe| News and current affairs from around the continent | DW | 17.10.2012

Just ahead of the next EU summit, Germany has proposed the idea of a super-commissioner who could take control in the eurozone. But it's not on the agenda, and will only come up for decision in December, at the earliest. 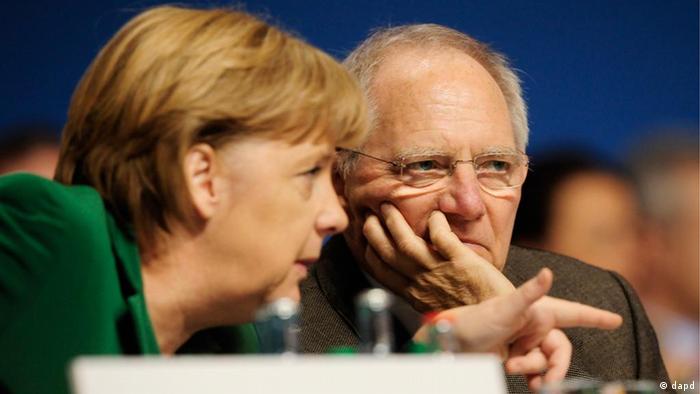 It's hard to remember how euphoric the European Union was just days ago, when it won the Nobel Peace Prize. This week, its leaders will once again be battling over the future of the euro.

At their summit in Brussels on Thursday and Friday (18-19.10.2102), they'll not just be considering a reform plan presented by the president of the European Council, Herman Van Rompuy. They'll also be looking at a bundle of ideas from Berlin.

Chancellor Angela Merkel is backing the proposals of her finance minister, Wolfgang Schäuble, for a strengthened role for the EU's monetary affairs commissioner, with "authority over the national budgets" of the eurozone member states. Merkel's support for the proposal has been confirmed by senior government sources.

'We already have a commissioner' 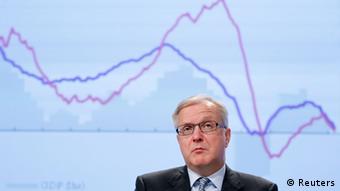 Schäuble's idea, which he introduced during a recent flight from a trip to Asia, has caused some upset at EU headquarters in Brussels. He said the monetary affairs commissioner needed to inspire the same kind of fear as the competition commissioner does now.

"Rehn already has an extremely important role, as you know, as vice-president for economic and monetary affairs and for the euro," she told journalists, "and he's fulfilling this role in a way which generates, if not fear, a lot of respect."

Currently Rehn can only make budget recommendations to national governments; in the future, the budgets will have to be laid before him before they come into effect. That's already been agreed - Schäuble wants him further to be able to reject the budgets outright. That would mean violating the right of national parliaments to decide their own countries' budgets.

German government representatives who don't want to be named have been trying to put Schäuble's remarks into context. It's not a matter of deciding now whether the complex European treaties have to be changed again, they say. This week is the time to think about what reforms might make sense. A senior official said decisions would only be made in December.

Schäuble has suggested that a convention could meet in December with representatives of all the EU states to work out new treaty texts. If needed at all, it would only be a matter of changing individual passages. In addition, say the Berlin government representatives, the idea of a super-commissioner is not so new - the matter was discussed a year ago. The EU Commission has also agreed that the proposal was not fundamentally new.

Changes to the EU treaties controversial

But Ahrenkilde has soft-pedaled the idea of changing the treaties. "This is not an issue, which, as far as we're concerned, is something that is up for decision, or [is] even central to the discussion this week," she said.

Any change in the treaties or a surrender of budget rights to the EU could only be decided unanimously and would require ratification by all 27 members. France has already made it clear that it's not interested, and Britain and the Czech Republic both prevented changes in the treaties last year. That meant that the fiscal pact, which is to introduce a debt limit, had to be adopted by 25 member states without touching the Lisbon Treaty.

EU diplomats see little chance for Schäuble's proposals to succeed. But the German officials argued that courage was now needed to exploit the dynamics of the crisis and get on with reforms. 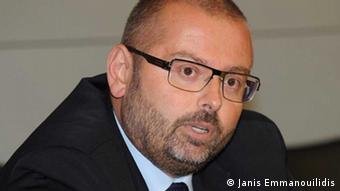 Emmanouilidis thinks change will have to come

"I think this process is necessary," he told DW. "If one really wants to set up an economic and monetary union in which the structural problems have been dealt with, then one has to take it further than it's been taken so far. If you want a fiscal and banking union, this is the right way."

Over the last few weeks, Van Rompuy, together with the presidents of the EU Commission, the European Central Bank and the Eurogroup, has been putting together a reform paper for consideration at the summit. It includes eurobonds and a sinking fund for all the troubled economies in the eurozone.

Both will be rejected by Merkel, according to German government sources. EU diplomats with plenty of summit experience are speculating that Germany will come up with further proposals, in order to downgrade the importance of the paper of the four presidents. "That's the way bargaining chips are gathered," said the diplomats.

But Emmanouilidis thinks a debate about the future instruments needed by an economic and monetary union makes plenty of sense. The markets - and the people - expect further reform, even if it will take some time.

"We have to take this path," he said. "It'll be difficult, even risky, if one has to change the European treaties. But there is no alternative to taking this path."

European parliament wants to decide for itself

Schäuble has also proposed that members of the European parliament representing just the 17 euro countries could meet on their own in order to provide democratic legitimacy for decisions which affected just the eurozone. The president of the parliament, Martin Schulz, is skeptical: he says the parliament will decide for itself in what form it reaches its decisions.

And government sources in Berlin are putting another proposal of Schäuble's - for a centralized eurozone budget - into context: he didn't mean a real budget, they say, but a kind of temporary system of rewards and subsidies to finance necessary reforms. Further details were not yet clear.

But EU Commission President Jose Manuel Barroso is in no hurry. In a speech to the European Parliament in September, he said that any changes to the treaties should only take place after the next European elections. They are not until June 2014.

European Union leaders meeting at a two-day summit will have plenty to debate when meetings start Thursday. Ways to prevent a further crisis and deal with the effects of the current one will be particularly important. (17.10.2012)

A group of 11 eurozone members wants to introduce a financial transactions tax, even if the rest of the bloc does not. The hope is for billions in revenues, but it will be years before the tax can be implemented. (10.10.2012)

Cautious optimism in the eurozone

After the critical summer months, things are starting to look up for the eurozone. How long the optimism will last, however, is unclear. The decision of how to handle Greece has been postponed. (15.09.2012)