The EU Commission wants to create a new dispute court for investors to become part of the TTIP trade pact. The proposal seeks to convince a hugely skeptical European public of the goods of free trade with the US. 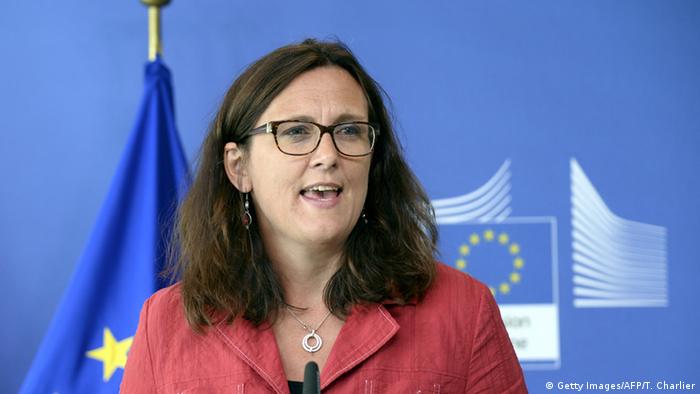 The European executive Commission is pushing forth a special court to resolve any disputes involving investors, as a part of a massive free trade deal it is negotiating with the United States.

The system would replace the widely criticized private tribunals proposed by Washington - one of the most controversial elements of the Transatlantic Trade and Investment Partnership (TTIP) deal.

"There is a fundamental lack of public trust in the old model," EU Trade Commissioner Cecilia Malmström said during a press conference in Brussels on Wednesday. "What we are proposing for the TTIP is a court-like system."

TTIP aims to create the world's largest free trade zone, comprising 800 million consumers on both sides of the Atlantic. Proponents argue the pact could jump-start EU's faltering economy, creating new jobs in the United States and the 28-member bloc. They add the EU and US should join forces to prevent Asia from taking on a lead role in world trade.

But opponents fear the deal could lead to a weakening of standards designed to protect consumers, workers and the environment. They also point out that TTIP would do away with import duties, which bring in billions of dollars annually into state or EU coffers.

Talks for TTIP between the US and the EU began in 2013, but were bogged down by concerns over corporations evading national laws. As a part of the pact, Washington had insisted that private companies be allowed to sue governments before special tribunals - a system called the investor-to-state dispute settlement, or ISDS.

The EU said the dispute court would be composed of judges, who would be publicly appointed by the EU and US, instead of professional arbitrators.

"We want to establish a new system built around the elements that make citizens trust domestic or international courts," EU's Malmström added.