The EU Commission wants carbon dioxide emissions from cars to be reduced by 30 percent by 2030, it announced on Wednesday. Opposition has been strong, not least from the powerful German car industry.

The European Commission announced on Wednesday proposals for stricter carbon dioxide (CO2) limits for cars and vans to cover the period from 2021 up until 2030, the current key target year in the battle against climate change.

The main proposal from the 28-member Commission — the body tasked with proposing legislation and the daily running of the EU — is that CO2 emissions from cars and vans be reduced by 30 percent from the levels recorded in 2021, the year when current rules will no longer apply.

By 2025, the Commission wants new cars to emit 15 percent less CO2, with the 30 percent rate kicking in five years later. Carmakers who fail to hit the desired targets would, under the proposed legislation, be subject to penalties of up to €95 ($110) for every gram of CO2 above the prescribed limit, which could lead to potentially huge fines in the event of wholesale flouting.

One carrot-and-stick element of the EU's proposal relates to the introduction of zero and low emission vehicles, such as electric or alternative fuel vehicles. If carmakers hit a benchmark target figure in the production of these type of vehicles, they will face less strict overall emission reduction targets.

"Europe is currently not on the right track," said Miguel Arias Canete, the EU's Climate Action & Energy Commissioner at the announcement of the proposals. "To drive and lead the global shift to electric, Europe has to get its house in order."

Part of getting that house in order should extend to dramatically reshaping the make-up of the European car market by greatly increasing the amount of electric cars on the continent's roads, he said.

Lobbying for a greener future, or not?

The car industry proposals are a crucial part of the EU's overall plan to hit key climate targets by the year 2030, the main one being a 40 percent reduction in greenhouse gas emissions from 1990 levels.

Read more: Should lobbyists be excluded from climate meetings?

Yet the main target figures have been the source of major debate at EU level, with significant opposition and fierce lobbying coming from car industry representatives right up until Wednesday morning. Large automotive sectors, such as Germany, have had a particularly big role in the discussions.

While the proposals are now past the first major stage of the legislative process, they must be approved by the 28 member states of the EU and by the European Parliament before becoming law.

That may be easier said than done, given that several EU countries such as Austria, Belgium, Ireland, the Netherlands and Sweden, among others, want the Commission to take a tougher stance on the motor industry.

The European Automobile Manufacturers' Association (ACEA), one of the main lobby groups, cautioned that the 30 percent target might be "overly challenging."

"The European auto industry considers a 20 percent reduction by 2030 for cars to be achievable at a high, but acceptable, cost," the organization said. It also suggested that the 2025 intermediary target may be too early to allow for technical changes to be made to certain engines.

Quotas a bridge too far — for now

The Commission says its incentive mechanism for the introduction of zero and low emission vehicles aims "to give the market a clear signal for investment in clean vehicles," yet the proposal stops short of creating any technology specific quotas and rather will let carmakers "decide which technologies to apply in order to meet their specific emissions targets," said Arias Cañete. 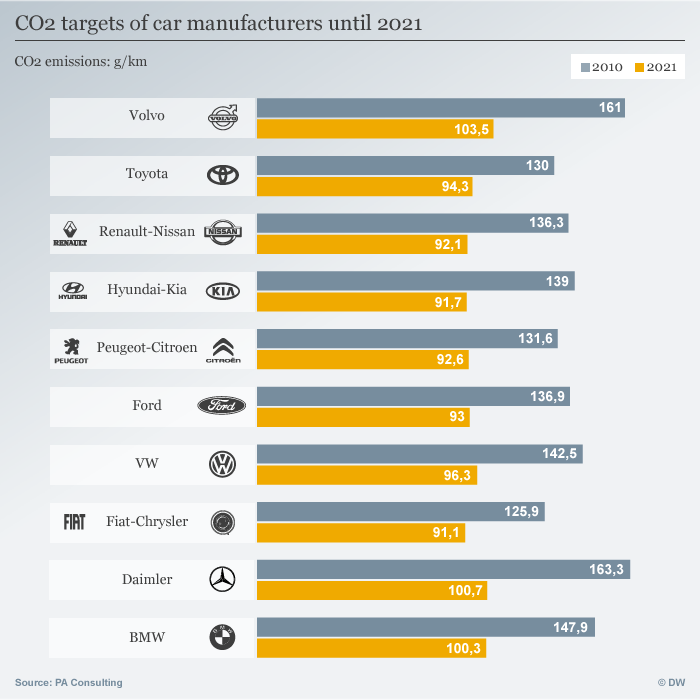 Since the Dieselgate scandal erupted, debate over the future and long-term viability of traditional engine types has raged in Europe and beyond. While the prospect of conventional engines meeting future emissions limits is a minimum short-term requirement, there is an increasing expectation that car manufacturers will invest heavily in electromobility, namely a shift from the use of fossil fuels towards electric and other alternatives.

Several manufacturers have already made significant pledges in this area but the intense lobbying which took place ahead of Wednesday's announcement effectively torpedoed the introduction of quotas, which would not have been popular in countries with a particularly strong automotive sector, such as Germany.

German foreign minister Sigmar Gabriel wrote to European Commission President Jean-Claude Juncker specifically on the matter, urging the bloc not to propose any quotas in relation to electric or alternative fuel vehicles.

"It is therefore very important to me that we do not stifle the innovation power of the automotive industry by overly tight EU legislation," he wrote.

Matthias Wissmann, the head of German car industry lobby group the VDA, was also in contact with Juncker's office ahead of the announcement, an illustration of the pressure the car industry put on legislators in a bid to avoid stringent emissions requirements.

The sacred cow that is the car

The automotive industry is extremely important to the German economy — it employs more than 800,000 people, produces more than 15 million vehicles each year, and accounts for close to 20 percent of German GDP.

While the emission scandals have had a profound effect on this critical sector, the industry's power and influence means it is still capable of strong resistance to demands for stricter environmental regulation at EU level.

Away from the lobbying in Brussels and elsewhere, this can be seen closer to home, for example in the ongoing government formation negotiations between Angela Merkel's Christian Democratic Union party (CDU), the pro-business Free Democratic Party (FDP) and the environmentalist Greens.

With negotiations ongoing, the Greens have agreed to shelve their demand for a ban on combustion engines by 2030, as well as other core environmental policies.