The European Parliament has warned that it will demand improvements to a new bank regulatory plan finalized by EU finance ministers as an EU summit opened in Brussels. 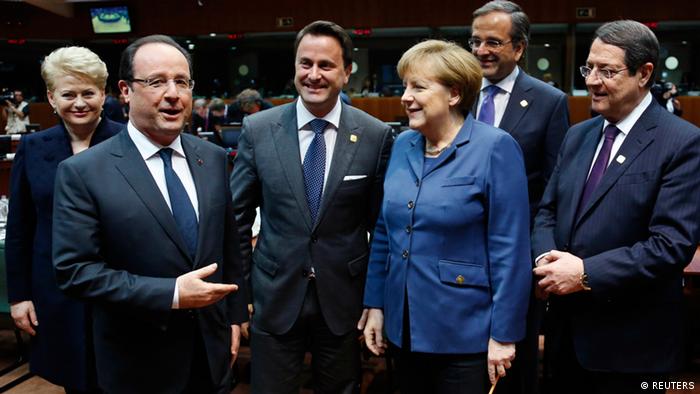 Parliament head Martin Schulz warned EU leaders gathered in Brussels on Thursday that "long negotiations" were still needed on their proposed banking union deal. The summit is due to forward the draft plan to parliament for final approval.

The banking union arrangement agreed by ministers late Wednesday was "very far" from what the Parliament had hoped for, Schulz said.

He questioned especially provisions on a common fund to pay for bank closures, saying it was "unacceptable" that these had been placed beyond parliament's scrutiny.

Negotiations with the European Parliament would prove to be complicated, Schulz added.

The Single Resolution Mechanism adopted by ministers Wednesday – prompted by financial crises in some eurozone nations in recent years - would in the future close failing banks before they do too much damage.

A single body would be created to police and wind up banks, backed by a fund fed by banks themselves to avoid using taxpayers' money as happened previously.

EU finance ministers have reached agreement on how to set up an institution tasked with shutting down or propping up failing banks. It offers Brussels unprecedented powers aimed at preventing taxpayer-funded bailouts. (19.12.2013)

Greece's parliament has passed a 2014 budget continuing the country's course of austerity measures. Meanwhile, international creditors have suspended a visit to Athens - and by extension the next tranche of loans. (08.12.2013)

Chancellor Angela Merkel has taken the oath of office, officially beginning her third term. She and her cabinet, which has also been sworn in, are due to hold their first meeting later in the day. (17.12.2013)

Germany's stance on EU security and defense has been pretty unambitious. But ministers in the new coalition government may push Chancellor Merkel toward supporting greater integration, argues Thorsten Benner. (19.12.2013)

Plans for binding economic reform pledges between member states and the EU are to be debated by summit leaders on Thursday evening.

German Finance Minister Wolfgang Schäuble said he expected EU legislation on the proposed banking union to be passed in the European Parliament's current term - before the European parliamentary elections in May.

Previous financial prescriptions imposed by the EU and international lenders on crisis-battered nations have proven deeply unpopular amongst eurozone members such as Greece and Portugal.

"Rise up against austerity," said one banner displayed by protestors in Brussels near the summit venue.

The leader of the Socialist faction in the European Parliament Hannes Swoboda said that EU heads of government "still do not seem to have understood that to make Europe a success, Europeans must be happy."

Arriving in Brussels for the two-day summit, Merkel said Europe must also cooperate "much more" when formulating foreign and security policies.

British Prime Minister David Cameron said it made sense for "nation states" to cooperate "but it is not right for the EU to have capabilities, armies, airforces and the rest of it."

Later on Thursday, EU leaders will discuss closer cooperation on defense matters, and the EU-Russia wrangle over Ukraine that in recent weeks has prompted mass pro-Europe protests in Kyiv.

Ukrainian President Viktor Yanukovych recently brushed aside an association pact with the EU and was granted loans and discount gas by Russia while visiting Moscow earlier this week.