Eurovision Song Contest winner Conchita Wurst spread a message of tolerance in Brussels. But the singer got a mixed reception with one representative saying equality has already been achieved for homosexuals in the EU. 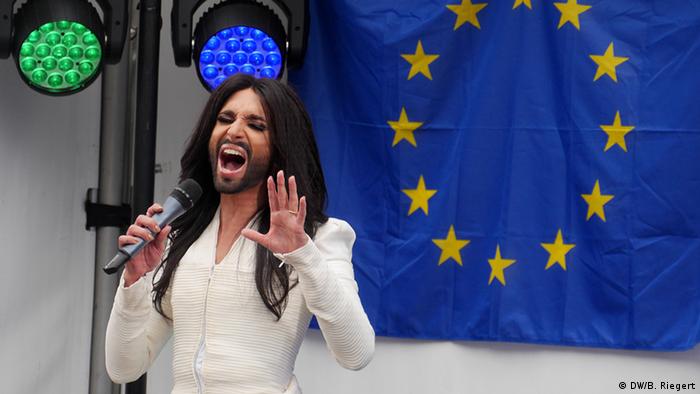 The European Parliament isn't exactly known for drawing large crowds but some 2,000 delegates, their employees, interns, visitors and passersby braved the rain during their lunch break to hear a bearded woman sing. But Conchita Wurst, the Austrian winner of this year's Eurovision Song Contest, wanted to bang the drum for her own cause before the concert began.

"I'm not a politician, only a singer," said Wurst coquettishly and then launched into a 15-minute speech that traversed European history from the First World War to the Eurovision Contest to finally arrive at her message that tolerance and respect are different for everyone. She breathed heavily into the microphone as she said this and ran her hands through her black wig.

"I will give everything I have to support those who want that [tolerance and respect]" Wurst said in a formal press conference in Parliament before the event. "Sex, color and background should no longer play a role."

The powerful voice of Conchita Wurst, behind whom lies the 25-year-old Thomas Neuwirth, performed several live songs after her speech. One of the best, of course, was her Eurovision-winning song "Rise like a Phoenix." The audience, which included many activists from the Brussels LGBT community, was thrilled. 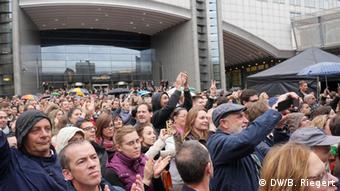 Wurst's fans were excited to watch the singer perform.

The guest performance (and its political contributions) was given at the invitation of the Greens vice president of the European Parliament, Ulrike Lunacek, along with three other parties.

"We have many crises in the world and, of course, Parliament also takes care of refugees and other important things, but I think that Conchita Wurst's message is also important," said Lunacek, who also comes from Austria and has lived openly as a lesbian for 20 years. Lunacek added that in the EU there are still too many prejudices against sexual minorities.

The event cost 17,000 euros ($21,565) for the stage, technical equipment and staff. This was paid for by the budget for PR activities and party money. Wurst eschewed a fee and traveled economy class with her crew from Vienna to Brussels, Lunacek said.

LGBT tolerance worked out in the EU?

As Wurst (meaning 'sausage' in German) elegantly floated through parliament in a white pantsuit, accompanied by many cameras, she attracted more attention than any of the candidates who are enduring their confirmation hearings as commissioners. Many phones were quickly unsheathed for a quick picture by enthusiastic parliamentarians. 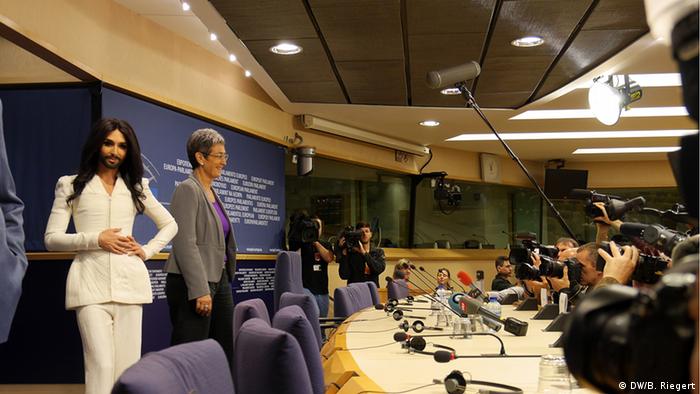 Wurst enjoyed posing for the many cameras

All the hype did not win over Beatrix von Storch of the conservative "Alternative for Germany" (AFD) party, who sharply criticized the singer's visit.

"We stand here discussing Mr. Wurst, a man in women's clothing who sings. To me this is completely overrated when compared to the problems are actually facing."

Nana Mouskouri as a role model?

Wurst seemed to enjoy the attention of the many camera teams and photographers in the press room.

"Criticism doesn't matter to me. No one has to come to hear me," she told reporters. "The persona of Conchita is one piece of the cake of my life. She did not come into being on a drawing board," said Thomas Neuwirth, who has performed as a drag queen since the age of 14 and as a bearded female singer won the European song competition in Copenhagen in spectacular fashion. 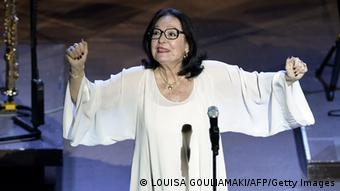 She has no interest in entering politics, she told Deutsche Welle.

"As an artist it is much easier to give my real opinion. We have more freedom to do what we want."

At the moment Wurst quite openly does not want to emulate the Greek singer Nana Mouskouri, who was a member of the European Parliament from 1994 to 1999. Mouskouri is also, though not a drag queen, an idol of many in the gay and lesbian world to this day.

The European Parliament has already received many exceptional visitors and exalted personalities as members. The Dalai Lama, Pussy Riot, Bob Geldof and Bono have all been there. Many crowned and uncrowned heads have been allowed to speak to the plenary. On November 25, Pope Francis will visit the Parliament.

Austria wins the Eurovision Song Contest for the first time in nearly 50 years. The recipe for success? A bearded cabaret artist with the alias Conchita Wurst, who can stop audiences in their tracks with her voice. (11.05.2014)

The resolution seeks to ensure freedoms for the lesbian, gay, bisexual, transgender, intersex and queer communities across the bloc. The move is seen as a swipe at conservative authorities in Poland and elsewhere.

Bangladesh's first transgender presenter took to the airways and COVID-vaccinated US nursing home residents got the all-clear for hugs. Read on for more heartwarming stories.