During a visit to Tehran, European Parliament chief Martin Schulz has said that relations between Iran and the European Union (EU) are at a "determining stage." The comments follow a nuclear deal earlier this year. 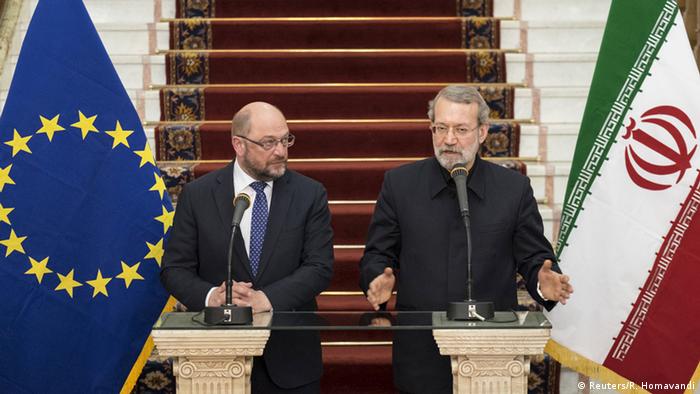 Speaking at a news conference in the Iranian capital on Saturday, Schulz said the Iran and its partners in the nuclear deal were "at the implementation stage of this agreement."

"At the end of this stage a door can be opened for economic cooperation and positive economic development," Schulz said.

The EU announced last month that it had adopted the legal framework to lift sanctions against Iran, once Tehran has curbed its nuclear activities.

The announcement came shortly after US President Barack Obama ordered the White House to also take steps towards lifting sanctions on Iran.

The EU and US sanctions have proved to be extremely damaging to Iran, locking up billions in the country's assets overseas and depriving its oil-dependent economy of vital technology and investment.

The nuclear agreement was reached in July this year, after 18 days of grueling talks in the Austrian capital, Vienna. The deal imposes new provisions for the inspection of Iranian facilities and aims to keep Iran from producing enough of the fissile material it would need to make a nuclear bomb.

Iran has always claimed, however, its nuclear program was for peaceful purposes.

During his one-day visit to the Iranian parliament on Saturday, Schulz also said that Iran plays a "key role" in regional stability, especially in Syria.

"The Islamic Republic of Iran is an element of stability in a region full of instability," Schulz said.

"As a result of terrorism in Syria we are facing an influx of refugees in Europe. Right now our main and common goal is fighting Daesh," the 'Islamic State' (IS) group, he said.

In a bid to end more than four years of conflict in Syria, Iran joined talks with world powers for the first time in Vienna last month. The Syrian regime and the opposition were not represented.

Both Iran and Russia support Syrian President Bashar al-Assad's regime, while Western powers have pushed for the leader to step down.

Iran hints at compromise ahead of Vienna talks

Top diplomats from around the world have arrived in Austria to discuss a peaceful resolution to the Syrian civil war. On the eve of the talks, Iranian officials hinted they could envision ally Assad stepping down. (30.10.2015)

German Foreign Minister Steinmeier has warned the US and Russia to avoid escalating the conflict in Syria. The foreign minister heads to the region over the weekend to meet with Iranian and Saudi officials. (14.10.2015)