EU on the way to a financial transaction tax | Europe| News and current affairs from around the continent | DW | 22.01.2013

EU on the way to a financial transaction tax

A group of EU countries plans to get their financial transaction tax, in spite of the strong opposition of several countries. "Enhanced cooperation" makes it possible for nine or more countries to work together. 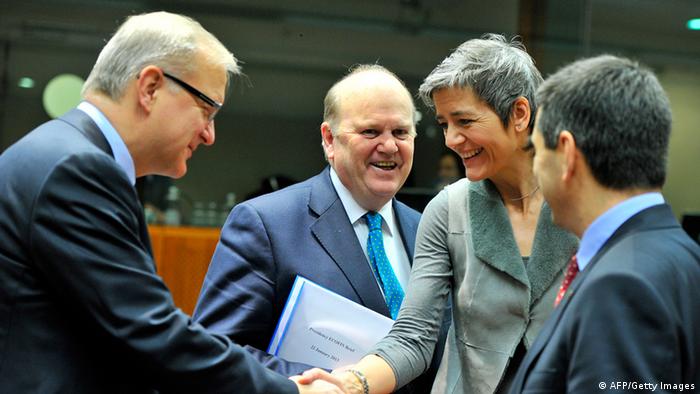 The introduction of a financial transaction tax in part of the European Union is moving closer. At a meeting of EU finance ministers in Brussels on Tuesday (22.01.2013), eleven countries decided to proceed with the idea on the basis of what's known as "enhanced cooperation," which allows a group of more than nine countries to work together without the rest.

An attempt to introduce the tax over the whole EU failed last year, with Britain and Sweden particularly strongly opposed, since they feared that the tax would put them at a competitive disadvantage.

"Enhanced cooperation" means that their veto no longer stops the idea from being implemented at all. So far, Germany, France, Belgium, Estonia, Greece, Spain, Italy, Austria, Portugal, Slovenia and Slovakia have joined up, and the others can do so later.

The Irish finance minister, Michael Noonan, who currently holds the rotating chair of the finance ministers' meeting, warned against excessive expectations with respect to the speed with which the tax would come.

Now, the European Commission has to make proposals as to the details – among them, the important issue of where the income generated by the tax should go. The tax can only come into operation when the countries involved have agreed unanimously to the details. 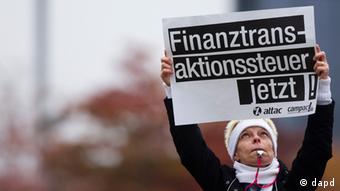 Many citizens in the EU support the tax

The EU tax commissioner, Algirdas Semeta, rejoiced at what he called a "milestone" for Europe, and forecast revenues in the double digit billions. And he used the opportunity to make the case to member countries for his proposals on battling tax evasion and tax fraud.

He said the battle would pay off in two ways: "Not only can it help recapture some of the one trillion euros a year we are losing in public revenues, but it will ensure fairer taxation at the individual, corporate, member state and global level."

Critics doubt that so much money is involved, either for the transaction tax or for the tax evasion strategy.

The panic is over

Meanwhile, the finance ministers seemed to be feeling more at ease. Even Anders Borg of Sweden, who has often attacked the "reform-resistant" southern states, seemed to be happy: "I think there's a general feeling of optimism now. Everyone feels that things are improving, that countries are doing what they should be doing – including Greece – so let's hope for the best."

EU Currency Commissioner Olli Rehn was certainly optimistic: the existential problems of the currency union were a thing of the past, market tensions had eased and confidence had begun to return. But he warned against complacency: "With more than 26 million Europeans unemployed, and businesses still struggling to obtain the credit they need to invest and grow, it is clear that we still have a great deal of work to do to ensure that Europe can move from stabilization to sustained recovery."

Rehn is prepared to see Ireland and Portugal pay their rescue loans back later than originally agreed. The two countries want to follow Greece's example and improve the conditions of their rescue packages. Not every EU member is prepared to help them. But Rehn said, "It is indeed in the very fundamental interest not only of the two countries but of the whole European Union that Ireland and Portugal will successfully return to market funding."

The issue will not be decided until March.

Spain feels itself at a disadvantage 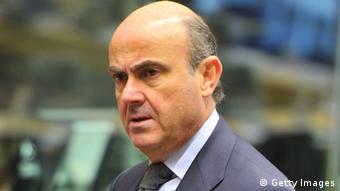 The Spanish finance minister, Luis de Grindos, was the only one not to vote in favor of Jeroen Dijsselbloem as new head of the Eurogroup on Monday, and he's now explained why. He said it had nothing to do with Dijsselbloem or his policies, but he felt that Spain was under-represented in European institutions, and that this was "unjust." All the same, Spain would work "closely and amicably with the new president, since we are all in the same boat."

Many people believe that Spain wanted to use its abstention to protest against the fact that it is the countries with AAA ratings which have most of the important financial positions in the EU, and that the weaker countries are being pushed to the side.

The strong countries deny any such strategy, but Spain still feels humiliated. And the latest reports confirm Spain's weakness – it's now at the bottom of the list on youth unemployment, with 57 percent, even below Greece, and the Commission has warned once more that it is failing to meet its commitments on budget consolidation. Spain is doing so badly that, a few months ago, the Commission officially reduced its budget targets.

The history of the euro currency also seems to be a history of broken rules. Efforts to rescue the currency seem to have followed the same pattern, but can the currency union survive without strict rules? (22.01.2013)

The eurozone finance ministers have elected Jeroen Dijsselbloem of the Netherlands as the new chief of the Eurogroup. Spain was the only country to vote against him, while France had openly expressed its doubts. (22.01.2013)

European countries are not ready for proposals for a political union. Economist Wim Kösters argues that the decisive question at present is whether shared rules for the currency union can be held to. (27.12.2012)