Dutch eurozone chief to emphasize austerity | Europe| News and current affairs from around the continent | DW | 22.01.2013

The eurozone finance ministers have elected Jeroen Dijsselbloem of the Netherlands as the new chief of the Eurogroup. Spain was the only country to vote against him, while France had openly expressed its doubts. 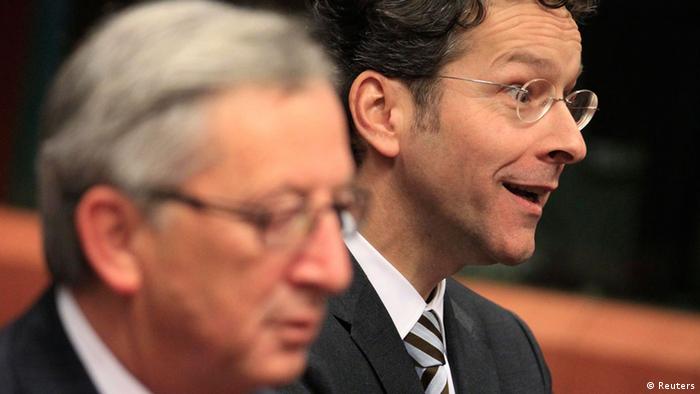 Departing Eurogroup chairman Jean-Claude Juncker came prepared - as usual - with a few wry remarks. Shortly before the finance ministers gathered in Brussels, Juncker said that he felt a certain melancholy about leading a meeting of the Euro Group for the last time. But above all, Luxembourg's prime minister expressed relief.

"I am happy to get out of this house," Juncker said. "For the past six months, I have cried 'who will get me out of here?'"

For eight years, Juncker tried to reconcile the competing interests of the 17 eurozone member states, and in recent years he had to play the role of mediator during perhaps the worst financial trouble to hit Europe in living memory.

French Finance Minister Pierre Moscovici praised Juncker for creating a balance of power between the northern and southern countries.

As late as last week, the French had expressed doubts about whether Jeroen Dijsselbloem (pictured above, right) was the right man to succeed Juncker. Paris considers Dijsselbloem and his Dutch homeland to be overly concerned with austerity and not focused enough on growth. That was also the reason why the French government prevented German Finance Minister Wolfgang Schäuble from taking over the post, ultimately leading to the nomination of Dijsselbloem. In the end, French Finance Minister Moscovici voted for the Dutch nominee. 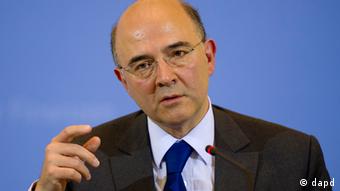 Moscovici has called for austerity to be balanced with growth measures

Surprisingly, Spanish Finance Minister Luis de Guindos cast the sole vote against Dijsselbloem. So far, de Guindos has not stated his reasons for straying from the eurozone pack. Austrian Finance Minister Maria Fekter, on the other hand, praised the Dutch finance and monetary policy as "very amenable to Austria."

"Holland, similar to Germany, has always pursued policies that promote a hard currency, and I expect that to be the case in the future," said Fekter, as she arrived in Brussels for the finance ministers' meeting.

'Trust in the euro'

Dijsselbloem, always the diplomat, said that he does not see any "great conflict" between growth and austerity. He believes both policies have to be pursued at the same time. Yet he seems to place a greater emphasis on austerity.

"We have to bring our budgets under control," Dijsselbloem said. "That will help us create new growth to invest in jobs and education."

In contrast, policymakers in Paris put the emphasis on growth. According to their philosophy, the state should create growth through stimulus and then the budget, through new revenue, can be balanced. In this respect, Dijsselbloem may have a difficult time satisfying the expectations of France and countries that share its views. But the new Eurogroup chairman has confidence in the future. He has said that there's a "new basis for trust in the euro."

No progress on Cyprus bailout

The Eurogroup apparently has little trust in the latest country to request a bailout: Cyprus. Although the finance ministers officially tried to play the subject down, the Cypriot government has warned that it will not remain financially solvent much longer. 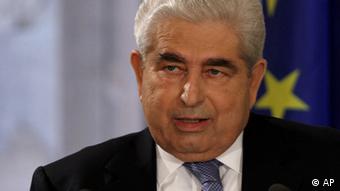 The only EU communist head of state, Christofias, has rejected calls for privatization

"We have done everything," said Cypriot Finance Minister Vassos Shiarly in Brussels. "Now the others have to do their part."

But for the time being, the eurozone is leaving Cyprus high and dry. Brussels may be waiting for the Mediterranean island nation's presidential elections, scheduled for February. The eurozone also has not been pleased with the way Cyprus' current president, Dimitris Christofias, has reacted to the EU's fiscal advice.

Christofias is the only communist head of state in the EU. He has, for example, rejected the privatization program that the EU has recommended. German Finance Minister Wolfgang Schäuble spoke frankly about the Cypriot president's position.

"I find it a bit difficult to imagine how one can - given the numbers - approach the problem without privatization; and I haven't even begun to talk about solving the problem," Schäuble said. The German finance minister has also said that Cyprus must understand that its problems jeopardize the entire eurozone.

Last week in Brussels, an outraged Christofias rejected allegations that wealthy Russians were using Cyprus as a hub to launder their money and that tax cheats were parking their money there. But the Eurogroup is going take a very close look at the situation on the island nation. And Cyprus should not expect any help before the elections.

New boss for the eurozone

Political heavyweight Jean-Claude Juncker steps down after eight years at the helm of the euro zone. He will be succeeded by Dutchman Jeroen Dijsselbloem. Juncker's humor is likely to be sorely missed. (21.01.2013)

Juncker: 'We see light at the end of the tunnel'

Eurogroup head Jean-Claude Juncker has said the EU handled a year filled with crises well. Following the EU summit, he tells DW that 2012 turned out better than he had expected 11 months ago. (15.12.2012)

European Union member Cyprus urgently needs outside aid to prevent bankruptcy. The International Monetary Fund (IMF) and the EU are considering their options, but other problems have now surfaced. (21.12.2012)