The EU's negotiator has unveiled recommendations for forthcoming Brexit talks. The announcement came as the UK's Brexit minister said the country 'would not pay a 100-billion-euro divorce bill.' 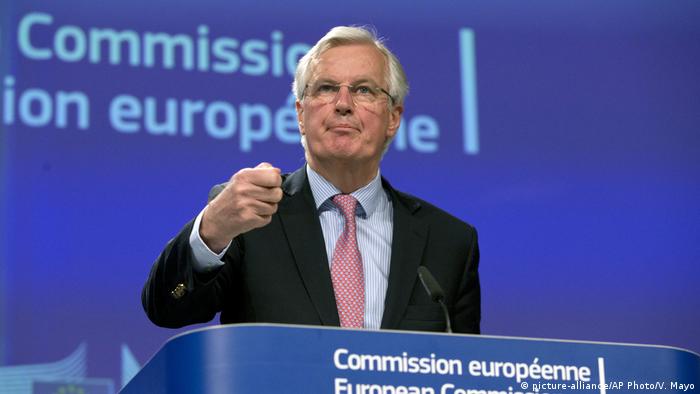 The EU's chief Brexit negotiator has unveiled recommendations for the forthcoming split. Michel Barnier's suggestions come four days after leaders of the 27 countries that intend to remain in the European Union met without British Prime Minister Theresa May and unanimously agreed on a tough overall strategy for seeing the island nation out.

"It is an illusion that Brexit will have no material impact on people's lives and that a deal can be done quickly and painlessly," Barnier said on Wednesday. Talks, Barnier added, will begin as soon as Britain is ready for them.

Barnier said Britain would need to put energy and effort into negotiations and respect the "financial engagements" of its current membership in the European Union - including existing debts - before talks about future ties can begin and would also need to withdraw from EU institutions in a timely manner. He called for the European Court of Justice to have jurisdiction in settling disputes during the negotiations. Barnier said he hoped to report significant progress in the talks by late autumn.

European commissioners adopted Barnier's recommendations before he briefed the press. The 66-year-old former government minister in France and onetime European commissioner will present his formal recommendations for the talks based on guidelines covering "people, money, Ireland" agreed to at last Saturday's EU 27 summit. On May 22, the EU 27 plans to give Barnier a formal mandate to conduct talks with British officials over the next two years.

'Not what the EU wants'

Shortly before Barnier's announcement, UK Brexit Minister David Davis told British television that the UK would pay what was legally due and "not just what the EU wants."

Davis also promised to take a tough stance in talks with the European Union to minimize the disruption for Brits on the continent and EU citizens living in the United Kingdom. "It is the intention that they will have a generous settlement, pretty much exactly what they enjoy now, and our British citizens abroad will do the same," Davis told the BBC on Wednesday. "Those are the things we are working on and working with all (EU member states)," he added, " and my expectation is that we will succeed with that."

After four decades, Britain is set to leave the European Union following the results of a narrow 2016 referendum vote. Formal negotiations will begin after Britain's June 8 elections. Barnier intends to wrap up talks by October 2018 to get the deal through the European Parliament in time for the United Kingdom's scheduled withdrawal on March 29, 2019.

Campaigning ahead of snap elections she called for June, British Prime Minister Theresa May attempted to convince voters to rally behind her Conservative party to strengthen the government's hand in exit discussions. May, who wants talks toward an EU-UK trade pact to begin alongside Brexit negotiations, told British voters that the remaining 27 EU member states have taken a united stance against their country ahead of talks.

The prime minister promises that EU officials will face "a bloody difficult woman." Britain's opposition has warned that May could sink a positive deal by approaching the talks heavy-handedly.

"These negotiations will not be easy," May told supporters in the eastern part of the city of Bristol, where voters chose a Labour lawmaker in Britain's last elections, in 2015. "There are 27 European member states united in their determination to get the deal that works for them. We must show the same unity of purpose here at home to ensure that we get a deal that works in our national interests, too."

When Theresa met Jean-Claude
A meeting with May last week left the European Commission's president "10 times more skeptical" about a Brexit deal than he had been before, the Frankfurter Allgemeine Zeitung reported on Sunday. Jean-Claude Juncker has publicly worried that British leaders "underestimate the technical difficulties we have to face," FAZ reported.

According to FAZ, Juncker called May's ideas "in a different galaxy" in a conversation with Angela Merkel. Germany's chancellor has since warned British leaders against having "illusions."