EU ministers urge Greece to do more to rein in deficit | Europe| News and current affairs from around the continent | DW | 16.02.2010

EU finance ministers said on Tuesday that Greece's efforts to bring its deficit under control will have to be stepped up. The EU offered its support, but no firm commitments on specific aid. 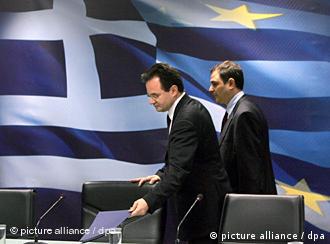 At a European Union meeting in Brussels, finance ministers from Germany, Sweden and Austria told Greece it needs to do more to bring its runaway debt under control and calm worried financial markets.

Joerg Asmussen, Germany's deputy finance minister, advised Greece to follow the lead of Ireland and Latvia, EU countries which are slashing spending in an effort to rein in their financial troubles.

"We made it clear the ball is in Greece's court," Asmussen said. "Additional measures by Greece are needed."

A statement issued by the ministers after the meeting said although Greece has until March 16 to prove it has taken initial steps towards reducing its budgetary deficit by four percent, they will likely demand more budget cuts or tax hikes to prevent wider financial troubles. The four percent reduction is the first step in a plan to eventually reduce the deficit from 12.7 percent of GDP to less than three percent in 2012.

"The pressure on Greece to consider further measures by March 16 has clearly increased," said Austrian Finance Minister Josef Proell. The euro-zone ministers did not elaborate on earlier talk of specific monetary aid, instead reaffirming Thursday's pledge to support Greece if things got out of control. 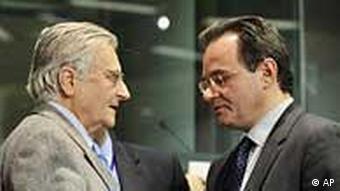 "Germany, France and others - there [would] be a group of countries who can give this money to Greece to stabilize the country and also the euro zone," said Proell in an interview with Reuters television. "But this debate is not yet on."

Greek Finance Minister George Papaconstantinou told reporters after the meeting that the country is already ahead of its deficit reduction goals, adding that a one-off tax on large companies had resulted in a January surplus.

Papaconstantinou, who warned on Monday that his government would need more than a day to turn things around, said the pledge of support should act as a deterrent if financial markets increased the pressure on Greece or other euro zone countries.

"Today it is Greece, tomorrow it could be another country," he said.

Greece's mounting debts have tarnished the euro and increased bond yields, making debt servicing much more difficult. The country has two sets of sovereign debt of more than eight billion euros each which it is to refinance in April and May.

Extra interest required by investors for holding Greek debt, compared to German bonds, increased to 3.35 percent on Tuesday, its highest level in a week, before dropping back down to below 3.20.

Greece has assured its euro-zone partners it will present a plan for further budget cuts in March, if its current austerity measures are not adequate to rein in its massive deficit. (16.02.2010)

Does the Greek crisis endanger the EU's status on the world stage?

European Union President Herman Van Rompuy was hoping to use the summit of EU leaders to put his personal stamp on Europe's economic policy. Instead he's fighting to save the EU's status in the world. (12.02.2010)