MEPs have decried the promotion of the "Rasputin of Brussels" to lead the 33,000 civil servants at the European Commission. Liberal parliamentarians have threatened to oust the Juncker Commission over the scandal. 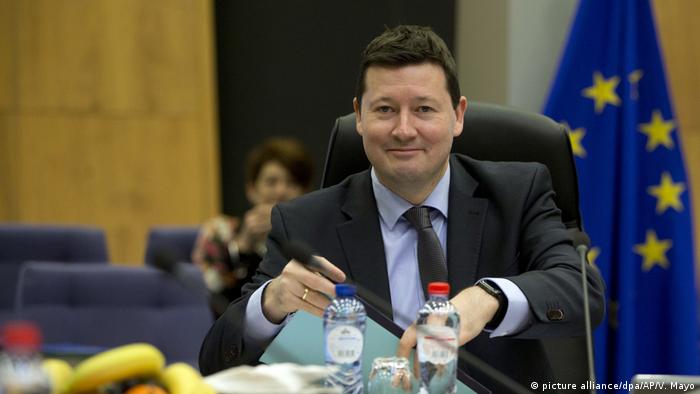 "What better way to give grist to the mill of euroskeptics and perpetuate the myth of things going on behind closed doors?" Francoise Grossetete of Juncker's center-right European People's Party (EPP Group) said at a parliamentary debate.

Commission President Jean-Claude Juncker announced in late February that Selmayr, who had been Juncker's chief of staff since 2014, would take over the commission's top civil servant post, which leads the oversight and coordination of the Commission's various departments.

But many parliamentarians have criticized the lack of transparency behind the decision.

Selmayr had initially applied in January to be the commission's next deputy chief. But minutes after hearing his application for that position had been successful, Juncker reportedly decided that Selmayr would bypass the deputy post and replace incumbent Secretary General Alexander Italianer, who is retiring.

The Greens have said they would hold up a vote on the Commission's budget in response, while the Liberals said Juncker should backtrack on the appointment.

The European ombudsman, which can name and shame wrongdoings in the Commission, said it was analyzing two formal complaints it had received about Selmayr's appointment.

"We have done everything by the book," he said, adding that Juncker was entitled under EU law to appoint the top EU civil servant.

"We shouldn't turn Mr. Selmayr into some monster," Oettinger said, adding that Selmayr, who is German, was "not a monster."

British media outlets have referred to Selmayr as the "Rasputin of Brussels" due to his reputation as a widely feared and ardently pro-EU power broker.

Selmayr's nationality has also raised eyebrows in Brussels amid fears the EU's largest member state has too much influence in EU institutions.

Read more: Juncker to stand down as Commission president at end of term