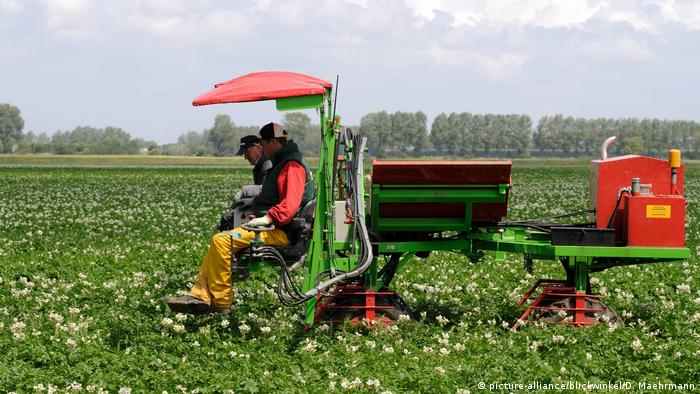 The reforms were criticized by green groups, who say the measures fail to meet the EU's climate goals

The farm deal worth €386.6 billion will be implemented from January 1, 2023, and makes up one-third of the EU's budget. It will be the bloc's farming policy till 2027 and aims to meet the EU's climate sustainability goals and support rural development.

It will also ensure fairer payments to farmers by giving €270 billion in direct aid.

"We are ensuring that farmers will be rewarded for their performance, their results," said German Member of the European Parliament Ulrike Müller, speaking at a press conference after the vote.

Speaking to members of the European Parliament in Strasbourg, Janusz Wojciechowski, the European Commissioner for Agriculture, welcomed the CAP reforms. "It will foster a sustainable and competitive agricultural sector that can support the livelihoods of farmers and provide healthy and sustainable food for society, while delivering significantly more in terms of environment and climate," he said.

But the CAP reforms have not been embraced by every EU lawmaker with some of them arguing that it doesn't align with global climate goals and also goes against the interest of small farmers.

German politician and Member of the European Green Party Martin Häusling said, "This is a dark day for environmental policy and EU farmers.”

Michal Wiezik, a Slovak member of the center-right European People's Party, shared a similar sentiment arguing that the only winners of the CAP reforms are oligarchs. "The reform fails to tie into the Biodiversity strategies. This reform should've been the solution, not a source of the problem," he said.

A week before the crucial vote, Swedish environmental activist Greta Thunberg also urged the EU to vote the CAP down.

Many environmental activists and EU officials are unhappy about how the CAP reforms do not align with the EU's Green Deal — a set of proposals unveiled by the European Commission in 2020, to ensure the bloc's climate, energy, transport and taxation policies reduce net greenhouse gas emissions by at least 55% by 2030, compared to the 1990 levels.

The new CAP's eco schemes specify that 22% of all CAP payments will cater to green farming from 2023-2024. This threshold will be raised to 25% from 2025-2027. Sommer Ackerman, 24, a young farmer and climate activist based in Finland says, "This deal claims to be 'green,' which is almost laughable."

"Currently, roughly one-third of the EU's budget is being spent on accelerating destruction, making this just another deal on the list of the EU's greenwashing projects. The intensive agricultural model is fueling the climate crisis by causing biodiversity loss, soil degradation, adding to water and air pollution and over extracting natural resources," she told DW.

The EU climate deal - A load of hot air?

What are the other concerns over CAP reforms?

"Social conditionality" is another aspect of the new farming scheme that aims to ensure that farmers who receive subsidies will be protected by Europe's labor laws.

Maria Noichl, a German politician and member of the center-left Socialists and Democrats, welcomed this reform — but criticized the manner in which CAP funding will be divided.

"It's not fair, because the very big farming consortiums will again get most of the money," she told DW.

"As a young and future farmer, I want the people in charge to make policies that help those who most need it, not line the pockets of big industrial farms," Ackerman told DW.

Prior to the vote, Commissioner Wojciechowski also highlighted that EU member states will have the power to implement CAP based on their national strategies.

"The new CAP strikes the right balance between flexibility for the Member States and assurance on the CAP expenditure," he told Members of the European Parliament in Strasbourg.

Ramon Armengol, president of the farming lobby Cogeca said, "The National Strategic Plans must seriously consider the future of investments in agriculture and the innovations that we will need to feed Europe's future."

Member states have until the end of the year to submit their implementation plans to the European Commission.

Farming in Italy is at a crossroads

Will the reforms have a global impact?

While CAP determines the direction of the EU's farming sector, some environmental activists and EU officials also highlighted how the policy influences global trade, food security and biodiversity around the world.

"The EU must recognize how their policies affect people not just in Europe, but also the whole world. The CAP isn't just an EU policy, it's a global one. It helps deforest the Amazon and it helps exploit immigrant farmworkers. All of which is not right and is so often ignored," climate activist Ackerman told DW.

Moreover, with the EU trying to promote sustainable food systems in Africa, MEP Noichl told DW, "This is an EU policy that is geared to exports, that wants foremost to enter other

markets and practice dumping. It's a fact that products from Europe are challenging African producers."

Celia Nyssens, an agriculture policy officer at the European Environmental Bureau says the new CAP has short-term and long-term effects.

"The EU will continue to overproduce products like milk, and continue to import products like soya from the US, South America and Brazil. But in the long term this has negative impacts on global food security and the environment," she told DW.

"If the EU wants to set an example for countries around the world and become a visionary in green farming, this new CAP has not delivered that vision," she added.