EU health ministers have held an emergency meeting as the daily death toll from coronavirus sets a new record in China. The German health minister said the outbreak could get worse before it gets better. 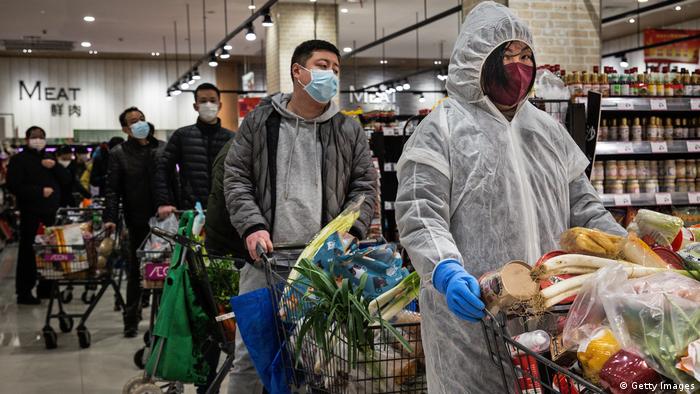 17:15  This concludes our live updates on the coronavirus outbreak for the moment. More information on the outbreak is available on our page and on DW TV. Thank you for joining us.

17:00  A sharp increase in reported COVID-19 cases in China is due to a change in counting methods and "does not represent a significant change in the trajectory of the outbreak," said Michael Ryan, head of the World Health Organization's (WHO) emergencies program.

15:30 Organizers of the Mobile World Congress reiterated that they cancelled the world's biggest mobile technology fair  this year in Barcelona because of health and safety concerns over the coronavirus. The Spanish government, in disagreement, said in a statement Thursday that it "believes it is not public health reasons in Spain that have motivated the cancellation." It did not give further details.

15:20 The US Centers for Disease Control and Prevention confirmed on Thursday the 15th case of the coronavirus in the US. The infected person is under quarantine at an airbase in Texas.

15:15 Vietnam placed 10,000 under quarantine after six coronavirus cases were found in a cluster of villages, making it the first lockdown of its kind outside of China.

15:00 The first of Germany's 16 coronavirus patients was released from hospital in Bavaria on Thursday, according to Bavaria's Health Ministry. The patient had tested negative several times. Thirteen more people are being treated for the coronavirus in Bavaria, and all are connected to auto parts supplier Webasto, where a Chinese colleague carrying the virus attended a training event in January.

13:49 Following a special meeting in Brussels, EU health ministers have agreed to increase preparations and coordination to prevent the virus from spreading across Europe.

Officials said they need further planning to avoid shortages of medicine or equipment, and that uniform prevention measures at entry points like airports are key.

13:27 Speaking with DW, German Health Minister Jens Spahn said that the type of lockdown measures currently being used in China would not be necessary were the virus to spread in Germany.

"If there is a measles outbreak in Germany," Spahn said, "and measles are much more infectious than what we see with the coronavirus so far, we actually are able to deal with it without putting whole cities under quarantine."

When asked when people can expect the outbreak to end, Spahn said that authorities don't have enough information to make that call.

"So far, in Europe and the European Union, detection and containment is working," he said. "But we have to admit, that’s today. It could get worse before it gets better, because as long as it's not under control in China, these regional epidemics can transform into a worldwide pandemic."

12:58 The new Communist Party chief in Hubei province has pledged to get the virus under control.

11:54 Japan has reported the first coronavirus death within its borders.

A woman in her 80s living in Kanagawa prefecture near Tokyo has died, Health Minister Katsunobu Kato confirmed. 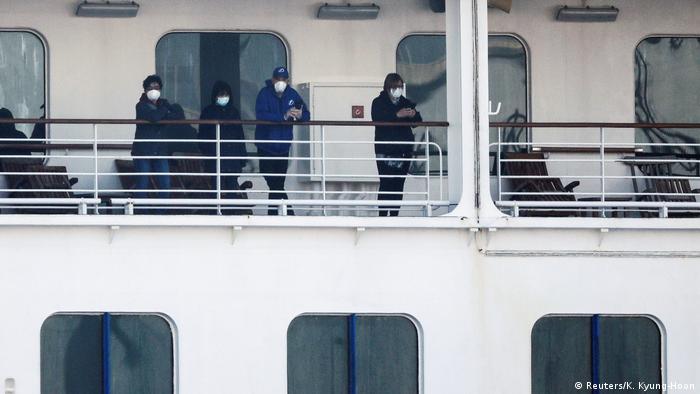 11:40 Outside of China, the largest cluster of coronavirus cases is on a cruise ship quarantined in a port off of Japan. 218 people on board have tested positive for the virus. Passengers and crew are likely to be held on board until February 19 at the earliest.

11:23 In other cruise ship news, the MS Westerdam has docked in Cambodia after it was denied the right to dock in Thailand, Japan, Taiwan, Guam and the Philippines over fears that its  1,455 passengers and 802 crew members are carrying coronavirus. None of the fluid samples taken from 20 people and transported by helicopter to the capital Phnom Penh for examination came back positive for the coronavirus, according to Cambodia's health ministry.

10:36 Experts were not surprised by China revising up the number of reported cases of coronavirus, virologist Professor Martin Stürmer of the IMD Laboratory for Interdisciplinary Medicine in Frankfurt has said in an interview with DW.

"We first thought it would peak around now," he said, when asked about when the outbreak would peak. "But we should now expect a peak at least two weeks from now."

10:31 German Health Minister Jens Spahn warned that the outbreak could lead to a shortage of medicine in Europe, where many of the chemicals used in pharmaceutical products are produced.

10:20 Organizers of the Tokyo 2020 Olympics have once again said they have no intention of cancelling or postponing the Olympic games.

"I would like to make it clear again that we are not considering a cancellation or postponement of the games. Let me make that clear," organizing committee president Yoshiro Mori said to top IOC officials gathered in Tokyo on Thursday.

The games are set to open in July, with the Olympic torch relay to begin in Tokyo next month.

10:15 The chief of the Communisty Party in Hubei province, where the outbreak started, has been stripped of his post. Jian Chaoliang is seemingly the highest-ranking official to have been ousted over the local government's reaction to the outbreak. He will be replaced by the former mayor of Shanghai, who is a protegé of Chinese President Xi Jinping.

10:03 German Health Minister Jens Spahn has said that it "doesn't make sense" for Germany to impose coronavirus-related travel restrictions. Speaking at an extraordinary meeting of EU health ministers in Brussels on Thursday, Spahn said that because of the EU's open-border policies, a national decision wouldn't be effective.

It is important that the bloc make such decisions together, he said.

10:01 The only direct flight between Berlin and Peking has been suspended until the end of March due to coronavirus.

9:51 WHO has said that, at this point, it is too early to make predictions about how the outbreak will develop.

"I think it's way too early to try to predict the beginning, the middle or the end of this epidemic right now," said Michael Ryan, head of WHO's health emergencies program, on Wednesday.

9:47 In Europe this morning, EU health ministers have gathered in Brussels for an emergency meeting to discuss how to prevent the virus — known officially as COVID-19 — from spreading across Europe.

An EU official who asked to remain anonymous said the meeting is to discuss health questions. Issues such as travel bans or restrictions will likely be avoided, as such measures are up to each individual country to decide.

9:46  Here's a review of the latest numbers: a record 14,800 new cases of coronavirus were reported within 24 hours in China's Hubei province on Thursday. The death toll from the virus in Hubei province also jumped by a record 242 fatalities, more than doubling the previous record number of 103 deaths set on Monday, partly due to changes in how the deaths are tallied.

9:45 Welcome to our live blog on world events connected with the coronavirus outbreak.