Two months before World Trade Organization talks on liberalizing trade, EU members are split over the issue of subsidies for farmers. Some subsidy backers say Brussels is keeping them in the dark. 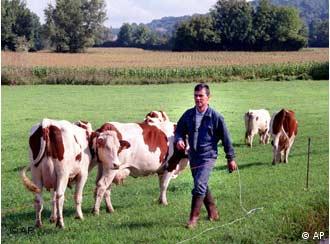 Save our farmers, cry the French

First came the proposal to reduce agricultural subsidies; then came the backlash.

Peter Mandelson, the EU trade commissioner, called for reducing subsidies under the bloc's common agricultural policy by 70 percent and farm import duties by 60 percent after 2013.

Then France, along with a dozen other members, called an emergency meeting Tuesday to tie his hands. They accused him of exceeding his mandate, offering too many concessions in negotiations, and want him restricted before he goes to Hong Kong in December.

Mandelson has been pressuring member states to give him the negotiating power to allow him to reach a deal over farm subsidies, which he says would be to everyone's benefit -- both developing and industrial nations.

Trade experts say progress on cutting subsidies that developed nations pay to their farmers is crucial to agreeing on a global trade back at WTO talks in Hong Kong in December, which could boost or hinder the world economy. 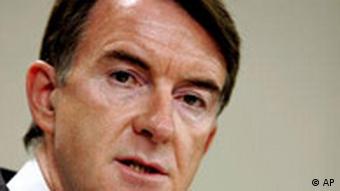 "The world trade talks are important for all of us, including many developing countries," he told reporters. "So it is very important that we are allowed to go forwards and not backwards."

Eleven of the union's 25 members, including Britain, support easing subsidies and tariffs during WTO negotiations.

Mandelson has said that his initiative to lower subsidies does not exceed his mandate and denies that he is British Prime Minister Tony Blair's lackey. Blair and French President Jacques Chirac have fought frequently over EU farm subsidies, which total over 40 billion euros ($48 billion) a year and largely benefit the French.

Meanwhile, European farmers reiterated their demands Tuesday that the European Commission stay within its mandate, echoing the French government.

Jean-Michel Lemetayer, head of the French farmers' group CAF, said that the commission had to know "the limits not to go past," particularly on the issue of opening up the European market to imports. 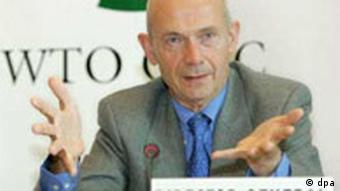 Lamy wants to see a deal

Addressing the meeting of 650 members of agriculture groups from across Europe, the director-general of the WTO, Pascal Lamy, tried to reassuring those present.

"My conviction is that European farmers have no reason to be on the defensive," Lamy said. "With these negotiations you have the opportunity to win a double dividend," he said, because European farmers could benefit from agricultural reforms within the European Union and from trade reforms by other members of the WTO, which could give European manufacturers more access to fast-growing markets like Brazil and India.

But anxieties within the farming community that the EU Commission might go too far in reducing support for its farmers were backed by the president of the agricultural commission in the European parliament, Joseph Daul.

Daul said that he had "the painful feeling that the EU is capitulating at the WTO."

The United States has called for the WTO to set up a complaints panel to investigate EU customs rules, which Washington says penalize US exports. (Jan. 14, 2005)

EU member states pay millions into the European Union each year. The farming subsidies, however, don't always go to the places where they are most needed. Some farmers are infuriated. (Oct. 7, 2005)

The task facing Pascal Lamy as head of the World Trade Organization is indeed daunting. The Doha round of talks has stalled and officials are doubtful it can be revived. (Sept. 1, 2005)

Farmers and lobby groups are split on an EU agricultural reform that may increase farmers' incomes and consumers' prices. A DW joint report reveals a rift between farmers and the groups purporting to represent them.