Across Europe, voters cast aside the old guard in favor of populists and Green parties. Keep up with the latest reactions here as Europe grapples with a heavily fractured parliament. 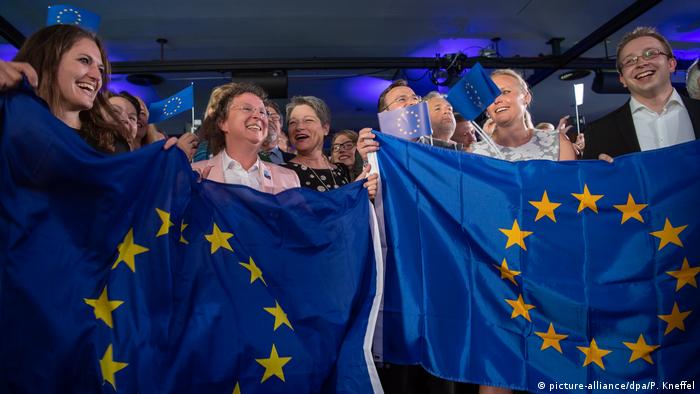 15:11 Spanish Prime Minister Pedro Sanchez, buoyed by the groundswell of support for his Socialist party, has already begun working on his plan to gather more power for Spain within the EU. He is meeting with both French President Emmanuel Macron and German Chancellor Angela Merkel before a Tuesday meeting in Brussels with other Socialist leaders from across the bloc, his office has announced.

Spain is seeking to lock down some top positions in Europe, most prominently vying for Foreign Minister Josep Borrell to take over from Federica Mogherini as the European Union's top diplomat.

14:47 Annegret Kramp-Karrenbauer, Merkel's hand-picked successor as leader of the CDU, said that Germany's ruling parties had to accept the blame for their poor election results.

"Our own mistakes led us to this result," she said in Berlin, promising major changes in the party, which is seen as outdated and out of touch by many younger voters.

13:53 British Prime Minister Theresa May lamented the "very disappointing" result for her Conservative party, which has thus far failed to produce a Brexit deal supported by a majority in parliament. Only 9.1% of the vote went to the Tories, compared to 23.1% in 2014.

"A very disappointing night for Conservatives," May wrote on Twitter. "It shows the importance of finding a Brexit deal, and I sincerely hope these results focus minds in parliament."

13:22 German Chancellor Angela Merkel's spokesman has said that there will be no cabinet reshuffle in the wake of disastrous EU election results, save to replace Justice Minister Katarina Barley, who will be entering the European Parliament for the Social Democrats (SPD).

Both Merkel's Christian Democrats (CDU) and the SPD, which together make up Germany's ruling coalition, suffered historic losses in Sunday's vote. Though still in first, the CDU dropped 6.4 points to 28% support, while the SPD went down over 11 points to garner a mere 15.8% of the vote.

The Cabinet is due to meet at 5 p.m. local time to discuss how to move forward from these results.

12:42 Brexit party leader Nigel Farage said that the party's 34% support, the largest of any single party in the UK, meant that they absolutely had to be included in Brexit negotiations.

"We've got a mandate now, we demand to be part of that negotiating team to get this country ready to leave whatever the circumstances."

12:38 Voter turnout across the EU was higher than it had been in 20 years, jumping eight points to over 50% of voters, the EU has announced. Here are the numbers broken down by country:

12:32 Italy's deputy prime minister and leader of the far-right League party celebrated his party's victory in the EU election, as well as populist victories across the bloc.

"The League is not only the first party in Italy, Marine Le Pen is the top European party in France, and Nigel Farage's party is the top party in Britain. So Italy, France and England - it is the sign of a Europe that is changing," he said.

12:11 The spokesman for the right-wing Alternative for Germany (AfD), Jörg Meuthen, slammed the Greens a day after they secured a major victory, garnering 22% of the vote to come second in the country's EU vote.

Meuthen called their success "hype" and said the Greens were "our primary opponent" who would "destroy this country, if they indeed came to govern."

The AfD has taken to positioning themselves as primarily opposed to the Green party in recent months.

12:00 European Commission Vice President Jyrki Katainen, a former prime minister of Finland, says that he could see the Greens joining the conservative EPP, the Social Democrats (S&D) and the liberal ALDE alliance in a ruling, pro-European coalition in the EU parliament.

11:44 With final results from Sweden coming in, it became apparent that the ethno-nationalist Sweden Democrats party had made the largest gains by a single party in the country grabbing 15.4% percent of the votes.

The 5.7% gain over the last election translates to three seats for Sweden's third largest party.

11:40 John McDonnell, the UK's Labour Party second most senior politician, wrote on Twitter that the party "can't hide from hit we took last night" after it fell to 14.1% support from 24.4% in 2014. In a depature from Labour leader Jeremy Corbyn, who has refused to take a strong stance on a second referendum, said that it might be time to take the Brexit issue "back to the people in a public vote."

11:30 Manfred Weber, the German politician who the center-right European People's Party (EEP) candidate for European Commission President, has spoken about the battering centrist parties took in the polls.

"We are facing a shrinking center," he said.  "So what I would ask us to do to is to join our forces to work together from now."

Weber added that the EPP, smaller now than in 2014 but still the largest bloc, was ready to begin coalition talks with other groups.

Around 22% of the global workforce over the next three decades is expected to come from India. Experts say unemployment in the country will be "a huge problem" if more skilled workers are not trained.