The EU's foreign ministers have met to discuss new sanctions on Russia following the destruction of the MH17 passenger plane. Only the Netherlands - of all nations - has been delaying proceedings. 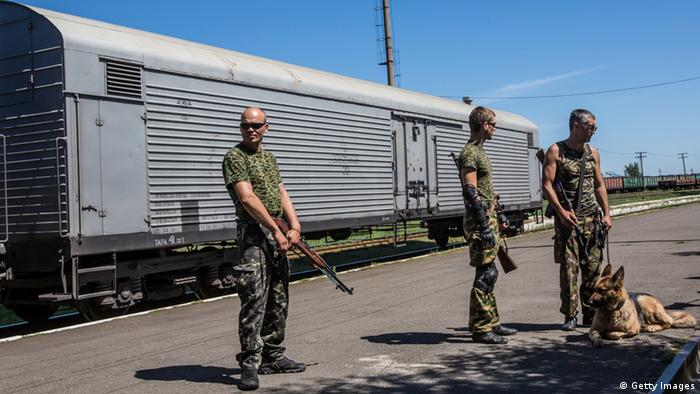 "I'd like to arrange a funeral, but I can't. I don't know where they are," a distraught Silene Fredriksz said on Dutch TV station NOS. Fredriksz is the mother of a young man killed with his girlfriend on Flight MH17 last Thursday (17.07.2014), "I want them back. They must come back. Mr Putin, send my children back! Please!"

The Netherlands has been shocked and outraged in the past few days by the undignified and unprofessional recovery of bodies - nearly two-thirds of which are Dutch - from the wreckage of the Boeing 777 in eastern Ukraine. TV and print images have shown bodies having belongings taken off them. In response, the Dutch banking association announced that banks had already blocked the accounts and credit cards of victims in order to stop their money being stolen.

Prime Minister Mark Rutte told the Dutch parliament in The Hague on Monday (21.07.2014) that most of the bodies were being stored on refrigerated railway cars. "I can confirm that the first team of forensic experts has reached the train," said Rutte. "The train is being sealed, but it is not yet clear where it will be driven to." 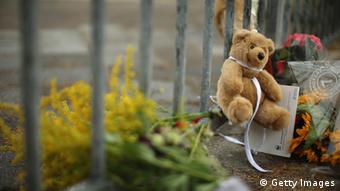 The Netherlands is in mourning

Rutte said he was doing all he could to bring the bodies back to Amsterdam for identification as quickly as possible, but whether Ukraine will accede to this is not yet certain. "There are still 50 bodies missing lying in the fields," Rutte pointed out.

The Dutch Prime Minister said he was in contact with both the Russian and Ukrainian presidents, but he has been notably cautious with his blame. "I want to know that the bodies are safe before I share out the blame," he said, apparently wary of the unpredictable behavior of pro-Russian rebels in the region. The Dutch government had to accept that the separatists have the crash site under their control, said Rutte, dismissing suggestions from parliamentarians to send Dutch troops to the area.

Now the European Union's foreign ministers are meeting in Brussels to discuss the political consequences of the plane crash, and it is the British, rather than the Dutch, who are proposing tougher sanctions against Russia. The new British Foreign Minister Phillip Hammond told the BBC that there should be tough and lasting consequences for the Russian economy if the Kremlin continues to support the rebels by allowing weapons deliveries across its borders. 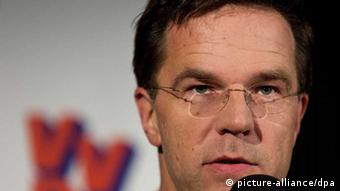 Mark Rutte ruled out sending Dutch troops to the area

Prime Minister David Cameron has also said he was ready to impose sanctions such as stopping export of high-end technology to Russia. The EU could take steps like this, but an embargo against whole economic sectors would require a leaders' summit. German Chancellor Angela Merkel and French President Francois Hollande, who called counterparts around Europe, are both said to be in favor of getting tougher. Whether this will mean the comprehensive so-called "stage 3" economic sanctions is another matter.

Last week the European Parliament in Strasbourg called for a weapons embargo on Russia, but France opposed the move, largely because two French warships - together worth 1.2 billion euros ($1.6 billion), are soon to be delivered to the Russian navy. Russian soldiers are already in France being trained to use them.

Though Rutte has been avoiding harsh rhetoric for fear of antagonizing separatists, he told the Dutch parliament that the EU would stand together. "Sometimes we have this debate about Europe, about what doesn't work, but the sympathy and support I have received in my calls with almost all of my colleagues… has really moved me," he said. "That shows me that Europe is standing shoulder to shoulder in this crisis." 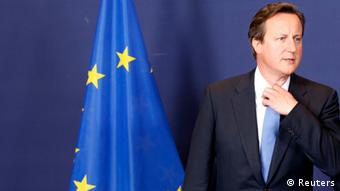 Camerons wants to get tough with Putin

Following an "intensive" phone call between Mark Rutte and the Russian president on Sunday, Vladimir Putin released a video message on Monday indirectly calling on the separatists not hinder the recovery of the bodies and the securing of evidence.

But that is not enough for many. US Secretary of State John Kerry, speaking ahead of a trip to the Middle East, said "the moment of truth" had come for Putin. He said it was time for the Russian president to show whether he was a part of the solution or a part of the problem. Meanwhile, Kerry's predecessor Hillary Clinton called on Europeans to finally get tough with Putin.

In the Netherlands, members of the royal family met relatives of the victims - with no media presence. There is still much anger in the country. Some Dutch sporting federations have even called for a boycott of the soccer World Cup in Russia, set for 2018. As Dutch sports marketer Frank van den Wall Bake put it on Twitter: "That would touch Putin's soul."

Among the passengers on flight MH17 were renowned AIDS researchers and activists. They were on their way to the International AIDS Conference in Melbourne - now grief and dismay overshadow the conference. (20.07.2014)

Ukraine willing to hand MH17 crash investigation over to West

Kyiv has said it is willing to hand control of the MH17 crash investigation over to Western authorities. Amid fresh fighting in Donetsk, Dutch investigators have arrived in east Ukraine to inspect recovered bodies. (21.07.2014)