EU Court Says Parmesan Cheese Must Come From Italy | Europe | News and current affairs from around the continent | DW | 27.02.2008

The European Union's highest court has upheld the bloc's principle of protected food names, ruling that only "Parmigiano Reggiano" -- or those cheeses made in Italy -- can be sold as "Parmesan." 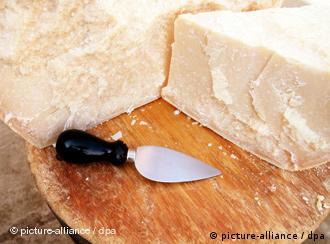 Italian cheesemakers have been fighting to protect their Parmesan

Everyone knows it, and virtually everyone enjoys it: grated Parmesan cheese sprinkled across a steaming bowl of pasta. But, it's been a hotly contested good, with countries wrestling over its name.

This week, the European Court of Justice, located in Luxembourg, rejected the idea that "Parmesan" is a generic name undeserving of protection.

"Only cheeses bearing the protected designation of origin (PDO) 'Parmigiano Reggiano' can be sold under the name 'Parmesan,'" the court decided, likely giving a boost to cheesemakers in Parma and the surrounding area in northern Italy.

The PDO system gives the cheese the same protection benefiting other European products, such as French camembert, which must come from Normandy, or champagne, which must come from the French region of the same name. Only products made in the place were the foods were first created can be sold under the traditional name. 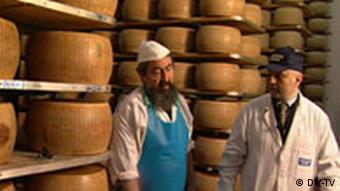 But there's a hitch. The court also ruled that Germany did not have the responsibility to police or take action against non-Italian Parmesan suppliers whose products were on German supermarket shelves.

The European Commission in Brussels had taken Germany to the European Court of Justice for failing to protect Parmigiano Reggiano's PDO rights by not prosecuting the sale of "Parmesan."

"A member state is not obliged to take on its own initiative the measures required in order to penalize the infringement on its territory of PDOs from another member state," the ruling stated.

The court said that it was up to Italian authorities to prosecute.

The European Commission and Italian cheesemakers were pleased with the verdict nonetheless.

"The court has upheld the basis of our PDO system," Commission agriculture spokesman Michael Mann said, as cited by Reuters news service. "Parmesan is not a generic product -- you can only call it that if you follow the specifications of Parmigiano Reggiano."

"We lost the case because it was specifically about our thinking that Germany had a legal responsibility to prevent the sale of these products," he added. 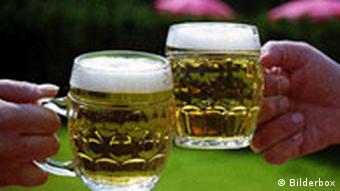 Germany has its own specialties

"The glass is half-full and half-empty," Igino Morini, spokesman of the Parmigiano cheesemakers' group, told DPA news agency. "Germany has been acquitted, but the court has recognized that the term 'Parmesan' can only be used for Parmigiano Reggiano."

Cheesemakers in the Italy who traditionally make Parmesan have been struggling to protect their product from cheaper, lower-quality copies from other areas.

The name "Parmigiano Reggiano," as well as the cheese's specific geographical origin and manufacturing process, won legal protection as a PDO in the EU in 1996.

Italy has the greatest number of PDOs -- 165 -- of any EU-member state. France has the second highest number, with the two countries sharing 40 percent of the total 772 products, including 78 types of cheeses.

The EU's list of protected names for farm products also applies to translations of the registered term or name across the 27-nation bloc.

How do you know if organic food really is organic? As the sector booms, more customers are looking for official certification labels. But there are several types that are often confusing and sometimes even hard to find. (26.01.2008)

A Ham and Cheese Sandwich by Any Other Name...

Your next fancy Parma ham-Roquefort sandwich may soon just be a plain ham and cheese if the European Union has its way and gets the World Trade Organization to protect the brands of 41 types of food and drink. (29.08.2003)

What do you think about the ruling? Please include your name and country in your reply.