Brussels says its third contract with the US-German vaccine consortium is the world's largest supply deal so far to stem the coronavirus' spread. 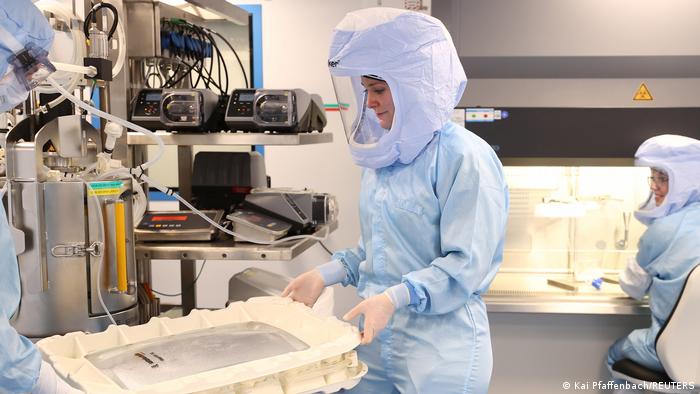 The 1.8 billion coronavirus vaccine doses from BioNTech-Pfizer would be delivered from this year through to 2023, European Commission President Ursula von der Leyen said at a press briefing on Friday.

"We will conclude in the next days. It will secure the doses necessary to give booster shots to increase immunity," said the top EU executive during a visit to Pfizer's vaccine plant in Puurs, Belgium.

In effect, the deal increases Brussels' bet on the messenger RNA (mRNA) technology several suppliers such as BioNTech-Pfizer use.

Others, such as AstraZeneca and Johnson & Johnson rely on more typical viral vector technology in vaccines. These have been connected with extremely rare cases of blood clots.

Von der Leyen also advanced the EU's date for vaccinating 70% of its adult population, saying this could be achieved by the end of July, instead of September as she had previously forecast.

"I'm confident we will have enough doses to vaccinate 70 percent of all EU adults already in July," she said, thanking Pfizer and its partners for their "enormous effort" in boosting vaccine manufacture and delivery.

Von der Leyen, herself a trained medical doctor, praised the mRNA technique pioneered in Germany as being "incredibly agile."

"If I may say so, engineer the mRNA in a way that it can adapt to potential escape vaccines," she urged — alongside Pfizer chief executive Albert Bouria at the press conference.

Referring to media speculation that the Commission might sue AstraZeneca over delays in it delivering contracted doses, von der Leyen said "no decision" had been taken in Brussels. "We have to wait for that."

So far, 24% of adults in the EU and the wider European Economic Area have received at least one vaccine dose, according to the European Center for Disease Prevention.

And, 9% have been fully vaccinated.

Von der Leyen asserted that the bloc had overcome this in part "due to our broad vaccine portfolio."