The EU executive has said national plans for renewables and energy efficiency fell short of the bloc's goals. The deficiency may undermine its ability to cut greenhouse gas emissions by 40% compared to 1990 levels. 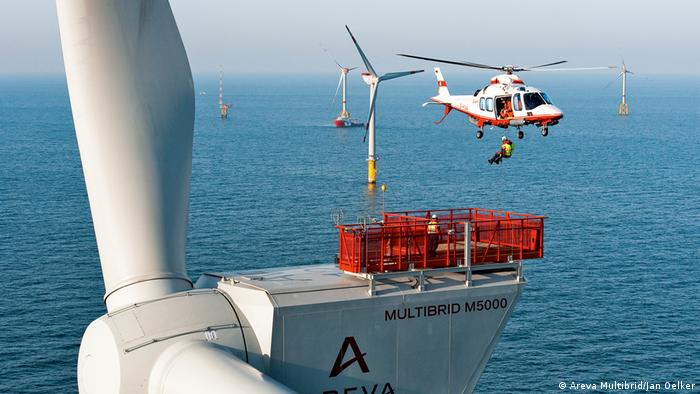 EU countries have submitted 10-year draft plans to the Commission outlining how they intend to contribute to the bloc's 2015 Paris climate accord commitment to cut greenhouse gas emissions by 40% compared to 1990 levels.

The draft plans need to be completed by the end of the year.

These goals apply to the entire EU and the governments of the 28 countries were tasked with developing national energy and climate plans to outline their contributions to achieving the common goals.

"With plans currently falling short both in terms of renewables and energy efficiency contributions, reaching the EU's overall climate and energy goals will require a collective step up of ambition," the Commission said.

Denmark, Estonia, Spain, Lithuania and Portugal offered "significantly high contributions" in reaching the renewable energy goal, the Commission said, but the bloc as a whole might miss its target.  The EU could also miss its target for improving energy efficiency, as only five member states have proposed "sufficient contributions."

Germany's plan lacking in many areas

Germany, the EU's largest economy, was found to be lacking in its plans to cut emissions in transportation, buildings, agriculture, heating and cooling, the Commission said.

"The draft plan also does not provide detailed information on policies and measures that go beyond those already existing," the Commission said.

On renewable energies, Germany had developed an ambitious target that went above what was required, the Commission said. However, Germany's draft plan does not adequately explain how the government intends to achieve these goals.

Vice-President for the Energy Union, Maros Sefcovic, said "no draft is perfect" but that he hoped the Commission's input would help in the formation of final national plans.

Commissioner for Climate Action and Energy, Miguel Arias Canete, said "in the final plans even more ambition is needed to set the EU on the right track in fighting climate change and modernizing our economy."

At an EU summit on Thursday and Friday, leaders will discuss setting the goal of net carbon neutrality for the bloc by 2050.

Europe's waters are expected to lose 30% of their already vulnerable ocean life to further warming, says a new study. Combined with overfishing, that loss can threaten livelihood and food security in coastal nations. (11.06.2019)

Floods, drought and mass migration: all factors why Germany has made the UN's response to climate change its priority at the Security Council. But political roadblocks at home and abroad could complicate action. (04.06.2019)

Voters in Germany want their elected representatives in Europe to tackle the environment more than any other issue. In a new survey spanning eight countries, migration was seen as the most pressing challenge overall. (13.05.2019)