Germany may have to figure out how to fulfill the EU's new plan to cut harmful greenhouse gas emissions. The environment minister said highway speed limits were back on the table but a return to nuclear power was not. 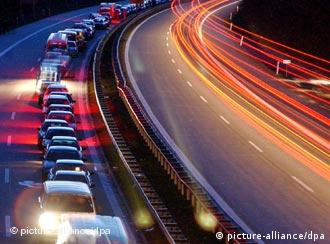 Emissions are lower at lower speeds

German Environment Minister Sigmar Gabriel on Wednesday, Jan. 23, welcomed the European Commission's energy and climate package to limit global warming, saying that Germany was already prepared to meet the targets set out by the EU.

But the Social Democrat added that Germany would have to do more if the planned international climate treaty came into effect. In that case, the EU aims to cut its emissions by up to 30 percent of 1990 levels. For Germany, that would mean a 42 percent reduction.

"A speed limit is becoming ever more important with the tightening of climate targets," said Gabriel. "Every penny counts."

Estimates have suggested a speed limit of 130 kilometers (80 miles) per hour on all German highways would only reduce the country's emissions by around 0.5 percent.

A speed limit would become unavoidable after 2009, Gabriel said, setting his sights on a change of government after the next federal elections, and the assumption that the current coalition of Christian Democrats and Social Democrats will become history.

The Christian Union parties would not allow a speed limit to be introduced, he said.

Berlin not quite satisfied

But Gabriel once more rejected putting an end to Germany's gradual phase-out of nuclear power, which, along with speed limits, is the subject of recurring debate -- and disagreement -- between the governing parties. 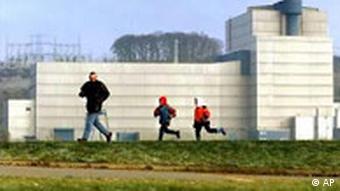 Germany is gradually phasing out its nuclear plants

Previously Berlin had worked under the assumption that the cuts would be based on the level of emissions in 1990, the international standard. But the new plan is based on 2005 levels.

Thus Germany will no longer be able to profit from the fall in emissions that was a result of the collapse of East Germany's industry in the early 1990s. Its plans had revolved around a 36 percent cut in emissions by 2020, but now will have to make up for a gap of 60-70 million tons.

Gabriel did say he expected the EU to give Germany a break in the dispute over CO2 limits for new cars in exchange for it accepting greater emissions cuts than southern European countries that have not done as much to slow down global warming.

Economics Minister Michael Glos of the Christian Social Union, however, said the load should be equally shared.

"Germany should not bear the brunt," he said.

The EU Commission proposal must still be accepted by the bloc's member states and the European Parliament, a process Brussels hopes will be completed by the end of the year.

The measures are designed to put into action the aim set by EU leaders last year to cut CO2 emissions by 20 percent by 2020, compared to 1990 levels.

The European Commission on Wednesday, Jan. 23, presented sweeping plans to fight global warming, under heavy fire from industry and many EU member countries over the possible costs of the scheme. (23.01.2008)

Although Germany decided years ago to phase-out nuclear power, politicians from the country's governing parties continue to argue about how and when it will happen. (02.09.2007)

Should Germany introduce speed limits on the autobahn? Please include your name and country in your reply.