Russia's invasion of Ukraine has expedited the "Strategic Compass" security strategy, which allows the European Union to form a rapid reaction force. Germany has offered to provide the "military core." 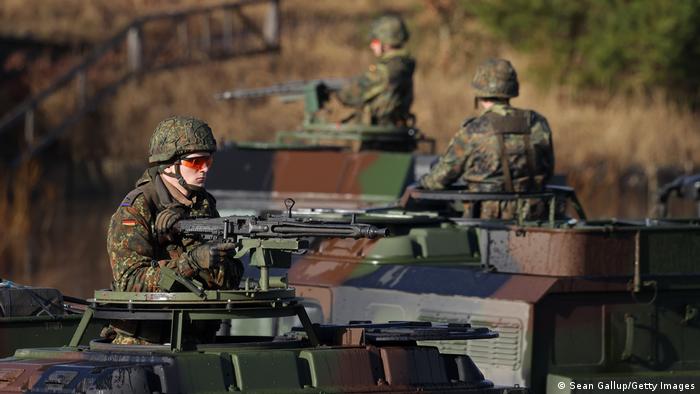 Germany is to provide the 'core' of the 5,000 troops planned for the EU's rapid reaction force that's set to become operational by 2025

As part of the new strategy, the European Union will create a force of as many as 5,000 troops, an overhaul of the EU battlegroups that have existed only on paper since 2007.

The joint response forces are to be operational by 2025.

German Defense Minister Christina Lambrecht told reporters ahead of the meeting that "Germany can provide the military core."

The move gives the European Union the "necessary toolbox" to become a "real geopolitical defense and security player together with NATO," Latvian Foreign Minister Edgars Rinkevics said on Twitter.

Why is the EU overhauling its security structure?

The plan for an overhaul of the European Union's security strategy came in the wake of the chaotic withdrawal of US and NATO forces from Afghanistan following the fall of Kabul to the Taliban on August 14 of last year.

Having never been deployed, EU battlegroups have lacked sufficient soldiers in the past, though in theory the concept provides for two units with roughly 1,500 soldiers to always be kept on standby. Every six months, the policy vision saw a rotation between various EU member states.

Austrian Defense Minister Klaudia Tanner said: "We need to become faster, in particular as we are faced with such a challenging situation at the moment."

What is the state of defense policy in the EU and Germany?

On February 24, Russia invaded Ukraine forcing a rethink to the 27-nation bloc's approach to continental security, which is largely buttressed by NATO and national armies.

The European Union has sought to create Permanent Structured Cooperation, known by the acronym PESCO, though in practice it is not a force on the ground. Not all member states of the EU are NATO member states and nearly a quarter of PESCO members are not members of NATO.

As PESCO is not a standing force yet, the question of how to integrate into NATO has not been addressed.

To confront the new reality of war in Europe, Germany announced a huge spending bump of €100 billion($110 billion) for its military, known as the Bundeswehr, this year. It marks a massive shift in the country's post-World War II national security policy.