EU foreign ministers gathering in Luxembourg have approved a set of tougher sanctions targeting sectors that will impact the Belarusian regime. The US, Canada and UK also imposed new punitive measures on Minsk. 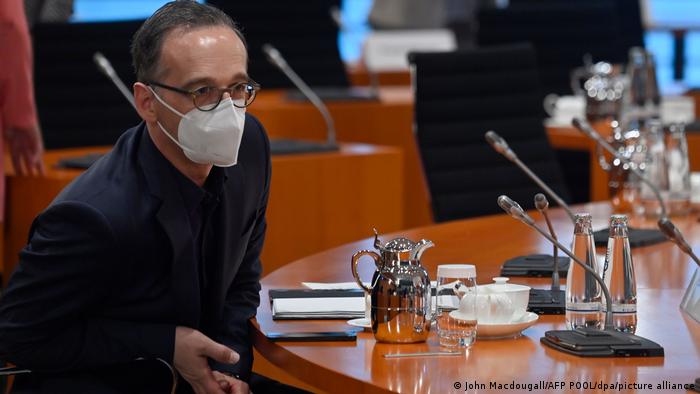 The agreement, struck at a meeting in Luxembourg, follows weeks of tough negotiations over which economic actors to hit. The punitive measures still need to be formally adopted, but their basic remit is now settled.

The sanctions are set to target revenue sources that benefit the Belarusian regime like potash fertilizer exports, the tobacco industry, petroleum and petrochemical products and the financial sector, diplomats told AFP news agency.

How did key figures react to the new measures?

When DW asked EU Special Rapporteur to Belarus Petras Austrevicius what the EU could do to protect Belarusian workers hit by sanctions, he replied: "We have very limited opportunities, I mean, to compensate all possible losses [ …. ] But certainly we can reach them out, at least some families. And they don't need much, because the average salary is well below €300 ($360). So, I mean, we are not speaking about billions of euros."

According to EU diplomats speaking to various news agencies, the foreign ministers convening in Luxembourg were also discussing placing more than 80 additional individuals and entities on an assets freeze, as well as imposing a visa ban upon them.

DW's Brussels bureau chief Alexandra von Nahmen said it is "very notable" that the EU has imposed broad sanctions targeting key areas of the Belarusian economy, such as the financial sector and petroleum products.

"This is a first for the European Union to target whole areas of the Belarusian economy," she said. "It is also notable that all member states were on board — even those with close economic ties to Belarus," she added.

Leading Belarussian opposition leader Sviatlana Tsikhanouskaya welcomed the "powerful" signal that the new sanctions represent. She told AFP in an interview that she hoped the targeting of key individuals "means that the sanctions will influence the regime, and they will have to look for dialogue with civil society."

Tsikhanouskaya added that the priority for her was the release of some 3,000 political prisoners, including her husband Sergei Tsikhanousky who had been an opposition candidate against Lukashenko before being arrested last year.

The US, Canada and the UK also imposed new sanctions on Belarus in coordination with the EU.

Washington on Monday sanctioned dozens of Belarusian officials, freezing their assets and banning their travel to the US.

German Foreign Minister Heiko Maas had called for broad economic sanctions against Minsk in light of the forced landing of a Ryanair flight in order to detain a dissident journalist.

"We should extend the sanctions to parts of the Belarusian economy, such as the potash industry or the energy sector. And we should deprive the government in Minsk of the possibility to raise funds within the EU by issuing government bonds," he said.

Belarusian strongman Lukashenko sparked widespread outrage by dispatching a fighter jet on May 23 to intercept a flight from Greece to Lithuania, eventually forcing the plane to land in Minsk, before arresting dissident journalist Raman Pratasevich and his girlfriend Sofia Sapega who were onboard.

The EU subsequently blocked Belarusian airlines from flying to the bloc, while it has also stopped carriers from its 27 nations from using Belarus' air space.

Lukashenko has ruled Belarus since 1994. He has so far managed to shrug off  pressure from the West, while retaining the support of Russian President Vladimir Putin.

Tsikhanouskaya, who insists she won last year's national election, held a working breakfast with ministers ahead of their summit on Monday.

What else was on the agenda at the EU meeting?

Meanwhile, Germany's Foreign Ministry is calling for a renewed focus on the EU's refugee deal with Turkey.

"We need an update to our migration cooperation with Turkey," Foreign Minister Maas told Die Welt.

"In all the difficulties we have with the Turkish government, we must acknowledge that the country has taken on a not-inconsiderable migration burden for us," Maas said.

A new accord would likely mean additional funding for Turkey, he said.

"I don't want to put any numbers out into the world, but it is completely clear that it won't work without money," Maas said.

The existing refugee deal between the EU and Turkey includes provisions for Ankara to crack down on unauthorized migration to the bloc, and for Greece to send migrants who have reached the Aegean islands illegally back to Turkey.

In return, the EU takes one recognized Syrian refugee from Turkey for every Syrian sent back. Brussels also provides financial support to the homeland of the refugees in order to take care of them.

German Chancellor Angela Merkel has described the June 1941 invasion as a cause for "shame." In her weekly video podcast, she also criticized modern-day crackdowns in Russia and Belarus.

Foreign Minister Heiko Maas said Germany had caused "immeasurable suffering" to the Herero and Nama people, in what is now Namibia, in the early part of the 20th century.

Heiko Maas said that Israel had the right to defend itself against "this massive and unacceptable attack." He is visiting Israel and calling for a cease-fire.