Ethnic tensions escalating in Xinjiang | Asia| An in-depth look at news from across the continent | DW | 05.07.2013

The latest incidents of deadly violence in China's northwestern region of Xinjiang indicate that Beijing's policies towards ethnic minorities have reached a dead end. 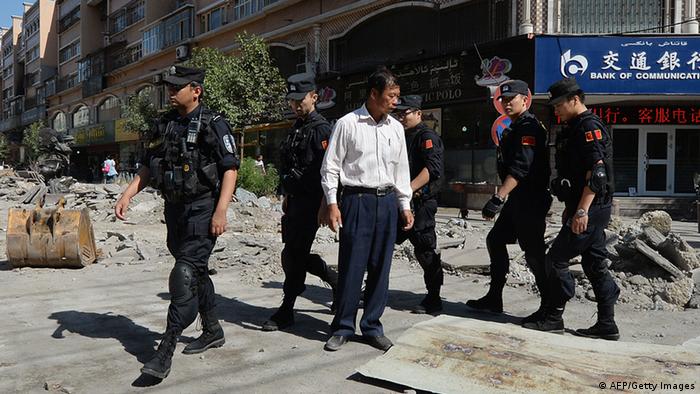 China's Autonomous Region of Xinjiang is more than four times larger than Germany, yet it has only 22 million inhabitants. Muslim Uighurs make up around 45 percent of the region's population. But they may soon lose their majority status as Han Chinese pour into Xinjiang in ever-increasing numbers. When the People's Liberation Army marched into the territory 64 years ago, Han Chinese accounted for just 6 percent of its population.

This development is tied to Beijing's ongoing policy of promoting large-scale migration into the remote and under-developed Western regions of Xinjiang and Tibet. Officially, the policy was designed, among other things, to support local inhabitants. But in reality this has only led to the locals feeling marginalized and suppressed, especially when it comes to their religious practices. Events like the "ethnic-harmony education month" held last May in Shanshan County have done nothing to change this. Last June 35, people were killed in clashes in Shanshan. 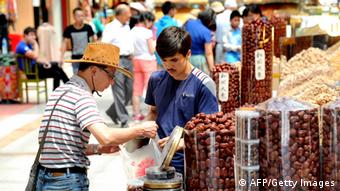 Beijing would like to see China's ethnic minorities live in harmony. But at what price?

Lam, who is a professor at the Chinese University of Hong Kong, added that "authorities in many Uighur-dominated towns have also forbidden Muslims to practice Ramadan and other religious rites. The teaching of Muslim religion and the Uighur language has consistently been cut in high schools and universities," he said.

According to a report by the UK-based "Economist" magazine, in Turpan - the prefecture where the latest deadly clashes took place - the authorities had been waging a campaign to persuade Uighur men not to grow long beards and women not to wear the veil or other Islamic clothing. Those living in neighborhoods where all residents complied were given preferential access to loans and government-sponsored job-training schemes, the report stated.

But the Chinese government doesn't put the blame for the growing tensions on flawed decisions taken by Beijing or local leaders - they are instead accusing extremist separatists. The Chinese state newspaper "Global Times" reported that Uighurs had traveled to Syria, where they were "radicalized" allegedly fighting alongside Syrian rebels. The paper cited a Chinese anti-terrorism official who said that around 100 people had done the same over the past year.

In a separate story, the newspaper quoted Syria's ambassador to China, Imad Moustafa, as saying that at least 30 members of the militant East Turkistan Islamic Movement, which seeks independence for Xinjiang, had entered Syria to fight government forces in Aleppo.

'Not purely a terrorism issue'

Raffaello Pantucci, an expert on China and Central Asia at the Royal United Services Institute - a London-based think tank - told the Associated Press (AP) it was plausible that some Uighurs who identify with radical Islamist ideology might participate in the Syrian conflict. 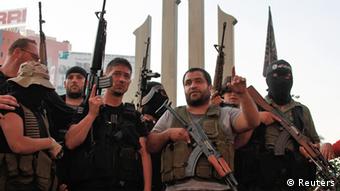 "That there are Uighurs who are probably radicalized going into the battlefield in Syria is not entirely surprising. But whether this is an organized thing from the East Turkistan movement or its elements, it's difficult to know," Pantucci said.

Terrorism expert Rohan Gunaratna told the AP he was also sceptical, since the Pakistan-based movement is believed to have only about 100 members and support from a few hundred other people. But rather than being driven purely by religious extremism, unrest in Xinjiang is largely fueled by tensions and anger over Beijing's policies in the region, said Gunaratna, who heads a terrorism research center in Singapore.

He added that the government's hard-line approach could be driving people to join separatist groups. "China has to address this not only as a pure terrorism issue, but more as an inter-ethnic, inter-religious issue."

Some experts say there are signs that Beijing might change its approach towards Tibet. Lam points to Yu Zhengsheng, a politburo member in charge of Tibet and Xinjiang, who earlier this year dropped hints to representative Tibetan figures in and out of China that Beijing might consider resuming long-stalled talks with emissaries of the Dalai Lama.

More than two dozen people have died in clashes with police in China’s western Xinjiang region. The riots are the deadliest since the 2009 clashes between Muslims and the Han Chinese population there. (26.06.2013)

Opinion: 'China's minorities policies are at a dead end'

As China gears up for the National People's Congress, another explosion of violence in the country's west shows that policies towards minorities are at a dead end, says DW's Matthias von Hein. (01.03.2012)

More recently, Chinese authorities allowed monks in several monasteries to openly display portraits of the Dalai Lama, who is still the most revered leader in the greater Tibet region.

Jin Wei, a director of ethnic and religious affairs at the Central Party School in Beijing, seems to have publicly broken away from the party orthodoxy on Tibet. Referring to the Dalai Lama, she said in a recent interview with the Hong Kong-based magazine "Asia Weekly": "We cannot just simply treat and regard him as an enemy." Doing this, she added, would trigger the ire of people who simply want to maintain their culture and traditions.

Jin believes there is a possibility that the "political struggle" between Beijing and the Dalai Lama might evolve into an ethnic conflict between Han Chinese and Tibetans.

Meanwhile, Beijing continues to rely on an intensified army presence in Xinjiang. Authorities also are offering rewards of up to $16,300 for information on terrorist activity that may help solve major terror crimes or lead to the arrest of terror suspects. It says those who knowingly shelter, protect or help "violent terrorist criminals" will be prosecuted.