On 21 September 2012 Hailemariam Desalegn was sworn in as Ethiopia’s prime minister. He was regarded as a compromise candidate and many Ethiopians expected more political freedom. 100 days on, hope is fading. A few days before Ethiopia's new prime minister, Hailemariam Desalegn, was sworn in, the Ethiopian government pardoned 2,000 political prisoners. Desalegn's inauguration coincided with the Orthodox New Year which falls in September. At the same time the Ethiopian government started negotiations in Kenya with the Ogaden National Liberation Front (ONLF), a separatist group based in the eastern part of the country. 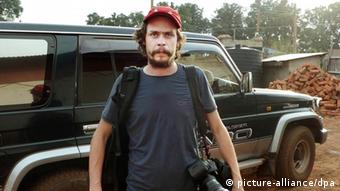 The Ethiopian government classifies the armed wing of ONLF as "terrorists". When the new prime minister hinted at the prospect of peace talks with arch rival Eritrea, many Ethiopians believed they were finally entering a new era of political sunshine.

The 47-year-old engineer and father of three daughters, is considered moderate and affable, compared to Meles Zenawi, Desalegn's charismatic predecessor. Zenawi ruled the country with an increasingly iron fist following the bloody 2005 elections.

A technocrat, Hailemariam Desalegn was a former provincial governor, foreign minister and deputy prime minister. He was also one of the closest confidants of Zenawi. Since he comes from one of Ethiopia's smallest ethnic groups, the Wolayta, many saw Desalagn as the best compromise candidate in the midst of political and economic infighting between the dominant Amhara, Oromos and Tigreer ethnic groups.

"Appointing someone from a small population like the Wolayta who have not traditionally been part of the power elite can have a strong symbolic value," Jason Mosley, an expert on Ethiopia at the Chatham House think tank, told DW in an interview. "But of course it has to work in practice."

Opposition politician Wondemagegn Demeke of the All Ethiopia Unity Party (AEUP) shares Mosley's view. "Hailemariam's appointment is unprecedented in the history of our country, because he was not part of the armed struggle. We were all surprised," 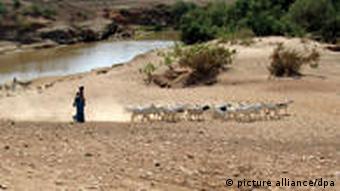 The opposition had been concerned that the succession would undermine the country's constitution. Fortunately that did not happen. But, according to Wondemagegen, the appointment of a new secretary of state showed that the executive is still controlled by the ruling coalition, the Ethiopian People's Revolutionary Democratic Front (EPRDF). "Therefore, we regret that there has been no change in policy since his appointment," the opposition politician added.

According to Mosley, "The policies towards its neighbor Somalia, as well as the Nile water policy towards Sudan and Egypt have not changed." He sees the recent cabinet reshuffle, which saw the appointment of three deputy prime ministers, as primarily due to the ethnic balance of power in the EPRDF multi-party coalition. There is still a small question mark as to whether the policy towards northern neighbor Eritrea will ever change. "Continuity with the previous government is the need of the hour," Mosley noted.

The optimism that greeted Ethiopia's development from partners abroad seems to have faded. At the beginning of 2013, some 16 members of the European Parliament appealed in an open letter to Hailemariam to respect the freedom of expression. "The new prime minister has a great opportunity to bring his country forward if he allows openness, criticism and freedom of expression," German MEP Alexander Graf Lambsdorff, one of the signatories, said. 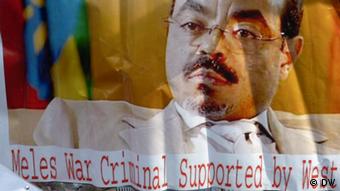 Nevertheless hardly a day goes without western diplomats watching cases against journalists. An example is the eleven journalists convicted under the draconian anti-terrorism law. Only after the Committee to Protect Journalists decried the arrests, and lobbied with other independent journalists, were some of the accused freed. However by the end of 2012, six were still in custody including the award-winning blogger Eskinder Nega.

Terrorism charges against 29 Muslim journalists, clergy and activists almost pushed Ethiopian Muslims to the limit. They have now made their Friday prayers in the Anwar Mosque in Addis Ababa a continuous protest against the government.

Change of guard, not policies

Hailemariam has repeatedly stressed his intention to continue with the policies of his predecessor Meles Zenawi. The flood of cases against journalists and activists, and the crackdown by security forces on Muslim protestors after his first 100 days in office, have observers thinking that there could be a new strong man in this African nation which retained its sovereignty during Africa's colonial times.

Strategically located and hosting the seat of the African Union, Ethiopia is considered the "capital of Africa". However, the country on the Horn of African is facing huge challenges. The population, already Africa's second largest, is growing unabated. The economy, though booming with double-digit growth, is only benefitting a small urban middle class. And finally, Ethiopia is a frontline state in the international fight against radical Islamist terrorism in neighboring Somalia. 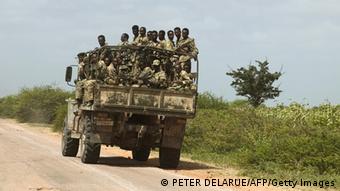 Since 1996 Ethiopia has made incursions into Somalia

These are all challenges that the new prime minister must address urgently with his new cabinet.

Meanwhile, his foreign policy plate seems to be full. In early January he was expected to mediate in the ongoing conflict between Sudan and South Sudan.

"The death of Meles Zenawi will not change Ethiopia's political landscape overnight. The media would like to see the leash dropped," Mosley said. "But since the bloody 2005 elections, Ethiopia's political line is to tighten its reins on power and release very slowly as much as the authorities deem appropriate and as permitted by the country's stability."

With such a policy, Mosley concluded, nothing substantial has changed.

Ethiopia has said acting prime minister Hailemariam Desalegn will remain at the helm until elections in 2015. The announcement came as the body of autocratic ruler Meles Zenawi was brought home for burial. (22.08.2012)

An Ethiopian court has jailed three opposition politicians for life and a journalist for 18 years. They were among 20 out of 24 defendants convicted of "terrorism" in June. The sentences of the other four are pending. (13.07.2012)