The Ethiopian government has denounced overnight ethnic-based violence on the outskirts of the capital. Thousands of Ethiopians took to the streets to demonstrate on Monday. 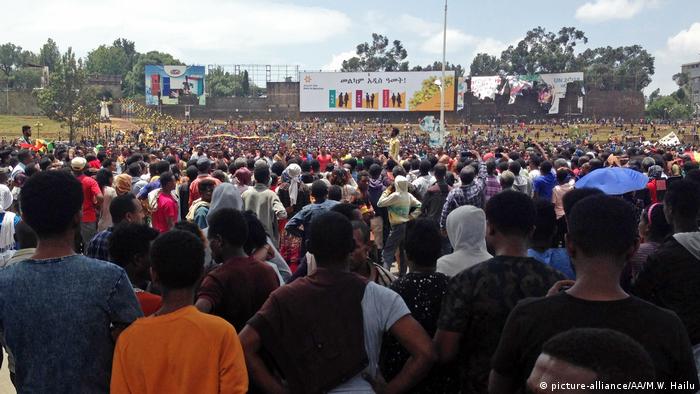 As democratic reforms launched by Prime Minister Abiy Ahmed's government slowly take shape in Ethiopia, several areas surrounding the capital, Addis Ababa, were hit by what is the latest round of violence in the country.

Thousands of Ethiopians took to the streets of Addis Ababa in protest on Monday after a weekend of ethnically motivated attacks that saw 23 people killed and dozens arrested on the outskirts of the capital.

Fighting broke out in the wake of the return of Oromo Liberation Front (OLF) leaders — once banned and termed terrorists by the government — to the country, invited back by reformist Prime Minister Abiy Ahmed.

"We demand justice," some of the rally-goers chanted. "The government's task is to protect its citizens, not to send condolences after they are butchered."

The nearby town of Burayu also reportedly faced ethnically-motivated violence, according to the Reporter Ethiopia news website, including deaths and thousands of people being displaced. The news platform says people are still fleeing their homes, with many headed to Addis Ababa.

On Monday in the capital, the protesters headed to Meskel Square, where just two days earlier thousands had gathered to welcome some 1,500 OLF fighters returning to Ethiopia from their base in neighboring Eritrea. The group has for decades advocated the "right to national self-determination" for the Oromo people, Ethiopia's largest ethnic group. Their return was preceded by scuffles between rival groups.

The OLF return comes amid sweeping government reforms to bring opposition groups back into politics. In a first step earlier this year, the OLF was among those removed from a list of terror groups. Tensions in restive areas dramatically declined when the Abiy government released several thousand prisoners, unblocked websites and welcomed opposition voices.

The government also welcomed the returnees.

"I'm happy to be here after 26 years of struggle from outside of Ethiopia," OLF leader Dawud Ibsa told reporters, adding that the OLF has struggled to bring the changes that are happening now in Ethiopia. "We are now seeing positive signs that include the respect for rule of law: That's why we came here," he said.

Deal to ease cross-border tensions after decades of hostilities

Just one day after the OLF returned to their native country, Ethiopia and Eritrea signed an agreement at a summit in Saudi Arabia. The deal is aimed at bolstering a historic peace accord between the two former Horn of Africa enemies. In July, Abiy and Eritrean President Isaias Afwerki had signed a "Joint Declaration of Peace and Friendship" that formally restored diplomatic relations. Eritrea gained its independence from Ethiopia in the early 1990s, and war broke out later that decade over a border dispute.

"There is a wind of hope blowing in the Horn of Africa," United Nations Secretary-General Antonio Guterres said.

Ethiopia’s reformist PM Abiy Ahmed has called for calm in the wake of clashes between rival groups on the streets of Addis Ababa, ahead of the weekend return of the exiled Oromo Liberation Front leadership. (14.09.2018)