Prime Minister Abiy Ahmed, who has gone from Nobel Peace Prize laureate to a leader caught up in a domestic conflict in the space of two years, pledged victory but also asked the public to take up arms. 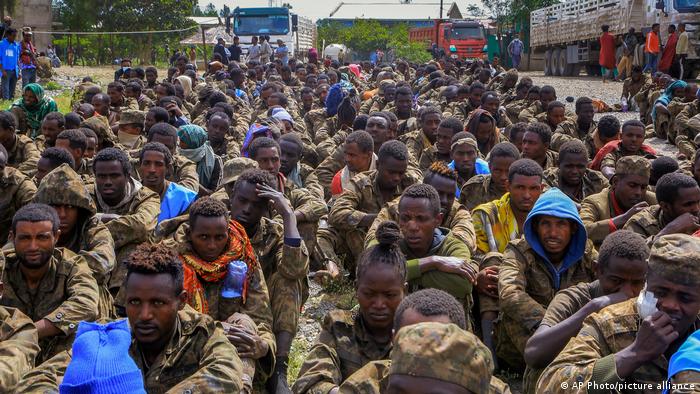 Ethiopian Prime Minister Abiy Ahmed on Monday issued an address to lawmakers that was also televised, in which he said government troops would crush forces from the Tigray People's Liberation Front (TPLF).

"We will repel them with full force," Abiy said of the conflict with the TPLF that began last year.

His comments coincided with claims of gains in Tigray by the TPLF, which used to control the country.

"The challenges are many... but I can tell you for sure, without a doubt, we will score a comprehensive victory," said the 2019 Nobel Peace Prize-winning politician. Abiy told countrymen and fellow lawmakers, "dying for Ethiopia is a duty [for] all of us," also urging ordinary citizens to take up any weapons available in the fight against the TPLF.

Abiy's announcement came one year into a conflict in the northern region that has so far cast some 400,000 people into famine, killed thousands of civilians and forced over 2.5 million people to flee their homes, mainly in Tigray.

Why did Ethiopia send troops to Tigray?

Abiy sent federal forces into Tigray in November 2020, promising to swiftly put down what he said were attacks against army camps in the region. Yet the TPLF, which controlled Ethiopian politics for three decades before Aibiy came to power in 2018, had gained control of most of the region by late June as fighting spread to the neighboring regions of Afar and Amhara.

Monday's vow of victory came as TPLF leaders claimed to have captured Kombolcha and Dessie, two strategically important cities along the highway some 375 kilometers (235 miles) north of the Ethiopian capital Addis Ababa.

Neither TPLF claims of capturing the cities, nor that government forces had carried out airstrikes in the region, could be confirmed Monday as large swaths of the area remain under a communications blackout.

Abiy won the Nobel Prize for forging better ties with neighboring Eritrea, after years of conflict or frozen ties with Ethiopia under TPLF leadership. But conflict with the country's former ruling party soon followed, with Ethiopia also accused of allowing Eritrean forces to join in.

US Ambassador to the UN Linda Thomas-Greenfield voiced alarm at the spreading violence and called on both sides to "begin ceasefire negotiations without preconditions."

EU foreign policy chief Josep Borrell on Monday said it was critical that fighting cease and a humanitarian blockade be lifted immediately.

The capturing of Kombolcha and Dessie would mark a major advance for the TPLF, which claims it has no "other motive than breaking the deadly siege" on Tigray. Its advances have also raised concern that it intends to march to the capital, something TPLF spokesman Getachew Reda vehemently denied.

Getachew denied the Ethiopian government claims that the TPLF had executed a group of 100 young men in Kombolcha, saying the accusation was "absolutely false."

The TPLF also told Reuters news agency, in claims that could not be verified, that it had joined forces with fighters from Oromiya — Ethiopia's most populous region — who are also fighting the central government. The Oromo Liberation Army (OLA) is a banned armed splinter group of the Oromo Liberation Front (OLF) opposition party. The Oromo are Ethiopia's largest ethnic group and many of their political leaders are currently behind bars.

"We have linked up with the OLF/OLA and if achieving our objectives in Tigray will require that we march to Addis Ababa, we will. But we are not saying we are marching to Addis Ababa," Getachew Reda told Reuters.

The OLA claim to have captured the town of Kemissie, south of Kombolcha, but this claim, too, could not be verified as residents claimed it was still in government hands but reported hearing gunfire.