The UN has suspended flights to Tigray's regional capital after a plane had to abort landing in Mekelle. The humanitarian situation in the region is dire with civilians facing famine-like conditions, the UN added. 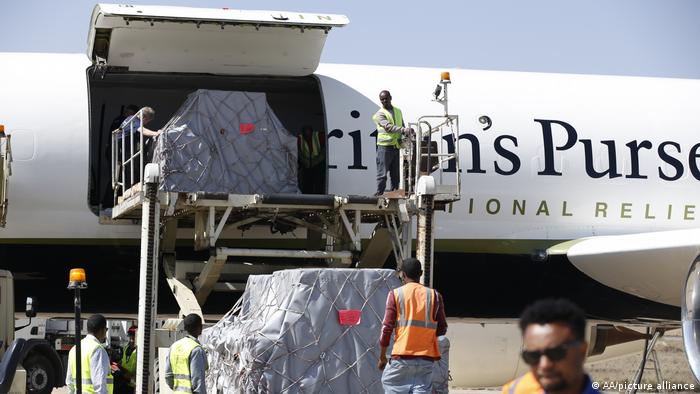 Ethiopia has on Friday, continued striking targets in the Tigray region for a fourth day.

Residents in the area said the airstrikes took place near the city's university. There were no immediate reports on possible casualties.

The United Nations suspended all flights to Mekelle after a plane was forced to abort a landing on Friday and returned to the Ethiopian capital, UN spokesman Stephane Dujarric said.

The flight from Addis Ababa had been cleared by federal authorities, Dujarric said, but was told "to abort landing by the Mekelle airport control tower." He said UN agencies were "carefully reviewing the circumstances" of why the plane was forced to turn around.

The government reportedly said it had been aware of the flight and that military flights were taking place at "a different time and direction."

There has been an escalation of hostilities this past week, with the Ethiopian military targeting various heavy weapons facilities, munitions depots, and other installations of the Tigray People's Liberation Front (TPLF).

The UN has been battling to deliver humanitarian aid to the region and has warned of a worsening humanitarian crisis. More than 2 million people have been displaced by the conflict.

The 5 million people who live in Tigray are effectively shut off from the outside world by the blockade. Both sides, the Ethiopian government and the TPLF, have traded accusations over who is at fault for the deteriorating situation.

Earlier this month, strained relations with the UN and Addis Ababa resulted in seven UN officials being expelled from the country over allegations they had misrepresented the scale of the problem in Tigray.

The conflict has claimed the lives of thousands and has been ongoing since November 2020 when Prime Minister Abiy Ahmed ordered a military offensive in the region. He had accused the TPLF of attacking an Ethiopian army base.

In June 2021, the TPLF retook the Tigrayan regional capital and Abiy declared a ceasefire on June 28. But fighting continued and began affecting the neighboring Amhara and Afar regions.

In Abiy's military campaign against the Tigrayan forces, the Eritrean government has provided him military backing.

There have also been various allegations of atrocities involving rape and mass murder involving all sides in the conflict.

In September Human Rights Watch published a report detailing an incident in which Eritrean government forces killed refugees and pillaged and occupied one of the camps. Tigrayan fighters later occupied the same camp and also allegedly slaughtered and robbed refugees in the area.