Esports keeps the lights on, as COVID-19 shuts down global sports 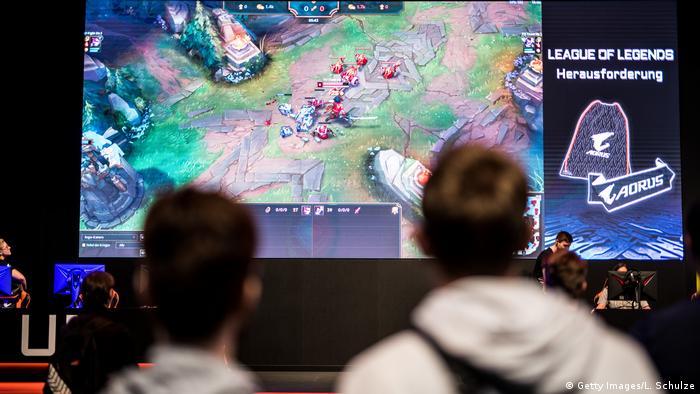 Professional esports League of Legends players in Berlin took part in a second day of remote play on Saturday, as their European Championship tournament was back online despite the coronavirus pandemic.

Most of the world's sports events have ground to a halt, including annual tournaments in football, baseball, basketball, Formula One, but also major sporting events like the UEFA Euro 2020, which was postponed to 2021.

The world of esports was also affected and also saw cancelations, as those tournaments are also held in front of large crowds in indoor arenas.

Read more: Esports is not a real sport - or is it?

League of Legends (LoL), a multiplayer strategy game played in a battlefield setting, was holding its European Championship (LEC) from January 24 until March 28 in the German capital, just as its arena was ordered to close to contain the spread of COVID-19.

But LEC organizers opted to continue running the event remotely.

Players have moved to their training facilities, several commentators have dialed in and organizers have sought to handle the complicated technical logistics of keeping everyone virtually connected.

On Friday night, the first remote day, organizers battled through issues with the audio feed and in some streams, the visual feed experienced some delays.

"The team behind the scenes is working super hard to fix all the issues for tomorrow's broadcast. Thank you all for sticking with us!" LEC organizers acknowledged on Twitter.

But despite the glitches, the games have gone on. If successful, Berlin's LEC could be a blueprint for other esports tournaments.

"The example of the LEC shows that electronic sports can adapt quickly. In this way, events can continue to take place and leagues can be continued," Tim Reichert, Chief Gaming Officer of German team Schalke 04, told the German SID sports news agency.

Read more: FIFA eWorld Cup: Is it a men-only domain?

Shuttered sports leagues are also looking for ways to keep their game going online. Chief among them is Formula One, which has set up a series of virtual races to take place at the same time as those that were canceled.

"Featuring a number of current F1 drivers, the series has been created to enable fans to continue watching Formula 1 races virtually, despite the ongoing COVID-19 situation that has affected this season's opening race calendar," F1 said in a statement.

German racer Nico Hülkenberg, who retired last year, was one of the pros who joined the gamers. The F1 simulation was played under the hashtag #TheRaceMustGoOn.

Fans can tune into YouTube, Facebook and gaming platform Twitch to watch the races, which will be ongoing until physical racing returns on June 7.

In Spain, two professional players from La Liga joined Ibai Llanos, one of the country's leading esports personalities, to help fill the void in football.

The game drew 60,000 viewers on Llanos' Twitch account and the success garnered enough enthusiasm for Llanos to host a tournament with other La Liga players this weekend, with proceeds going to Spain's medical personnel currently fighting the COVID-19 epidemic.

UEFA has rejected a request by Munich city council to light up the city's arena in rainbow colors for Germany's Euro 2020 game against Hungary. The city had wanted to send a message in support of LGBT+ people in Hungary.

What was once mainly for nerds has blossomed into a multi-billion-dollar market. Esports are booming and inspiring gamers from Asia to Africa. Which possibilities does this scene offer, and what problems does it face?

Digital games in Kenya now seem more of a sure bet than real-life sporting activities in the East African nation. Esports have also become a huge money-spinner for young Kenyans.