Ethiopian troops have "unleashed an attack" at the heavily militarized border with Eritrea, according to Eritrean officials. The two rival countries are locked in a conflict following a bloody war of independence. 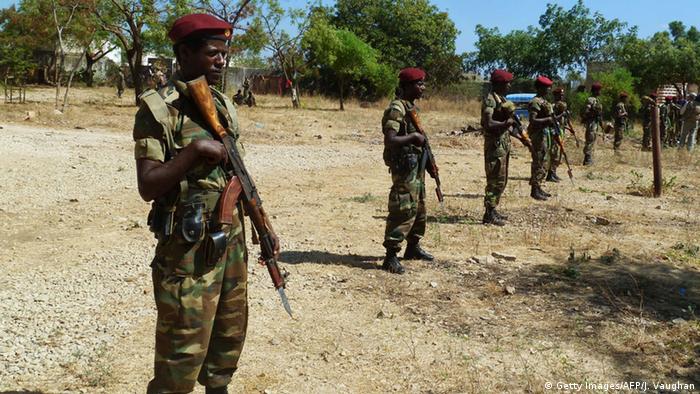 The alleged offensive targeted a disputed area of Tsorona, officials in the Eritrean capital of Asmara said.

Ethiopia "unleashed an attack against Eritrea," Eritrea's Information Ministry said in a statement, adding that the attack's "purpose and ramifications" were not yet clear.

Relatives of people close to Tsorona said residents were fleeing after artillery targeted the village on Sunday.

"My father lives in the area and told me by phone of heavy shelling in the area," Yared Tewolde told the AP news agency. "One heavy artillery shell has landed very close to a school and this has scared many."

There was no immediate response from Ethiopian officials.

The two neighboring countries have been bitter enemies since a long-running war saw Eritrea claim independence from Ethiopia in 1991. The two countries clashed anew between 1998 and 2000, and remain at loggerheads over the flashpoint town of Badme. The border settlement is still controlled by Ethiopia, despite a UN-backed commission awarding it to the smaller neighbor.

The area between the two countries remains heavily fortified.

Governments in Asmara and Addis Ababa also regularly trade accusations over backing rebels and protests on each others' territory.

In March 2012, Ethiopa attacked an Eritrean military base, claiming the Asmara regime supported "terrorist activities" from across the border.

The row between Egypt and Ethiopia over water from the River Nile goes back many years. Now it is escalating as Ethiopia forges ahead with the construction of a huge dam. But there is more to the dispute than just water. (14.06.2013)