The status of Eritrea's hill-top information ministry complex remained unclear on Tuesday after the previous day's seizure by dissident soldiers. The government said "all is calm" in the capital Asmara. 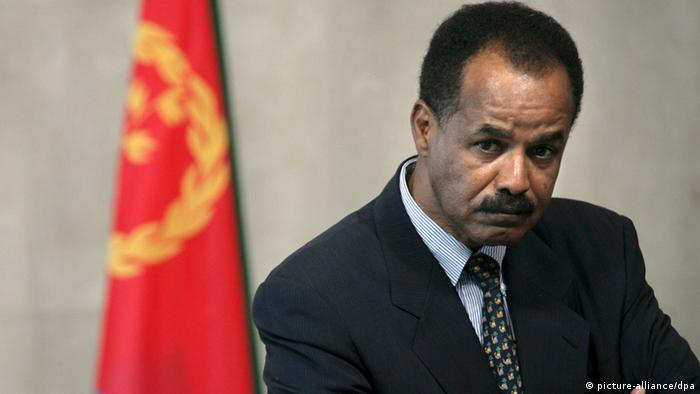 Little verified informaton emerged from Eritrea's tightly-controlled capital Asmara on Tuesday. A US-based opposition website, Awate.com, with contacts inside Eritrea, claimed that the commander of 100 rebels had agreed to surrender.

It identified him as Saleh Osman, a leading figure during the 1998-2000 border war between Eritrea and its estranged neighbor Ethiopia. "All Ministry of Information employees have been released," Awate said.

The director of the office of Eritrean President Issaias Afeworki (pictured above), Yemane Gebremeskel, played down reports about Monday's incident, saying "all is calm today, as it was indeed yesterday."

Eritrea's ambassador to South Africa, Salih Omar, told Associated Press that there was "no sign of mutiny or coup d'état or any other signs of uprising."

State media was back on air on Tuesday after broadcasting a rebel call on Monday for the release of thousands of political prisoners.

State television's main highlight on Tuesday was the heavy snow in Paris.

Diplomats in the region had told the news agencies on Monday that between 100 and 200 soldiers with two tanks initially surrounded the information ministry complex which sits on a hill overlooking Asmara.

One senior European diplomat quoted by Reuters said clear differences had become evident between elements of Eritrea's military and the government in Asmara.

It was just a matter of time, said the diplomat, before the "full price" was paid by Eritrea for its isolation on the world stage and its economic hardship.

Eritrea is a one-party state with about 6 million inhabitants. The country occupies a strategic strip of mountainous land overlooking the entrance to the Gulf of Aden, one of the world's busiest shipping lanes.

Eritrea split from Ethiopia in 1991 and relations between both remain strained.

In 2009, the UN Security Council imposed an embargo on Eritrea for allegedly funding and arming al-Shabab rebels in neighboring Somalia – charges denied by Asmara.