Erich Maria Remarque: The long legacy of 'All Quiet on the Western Front' 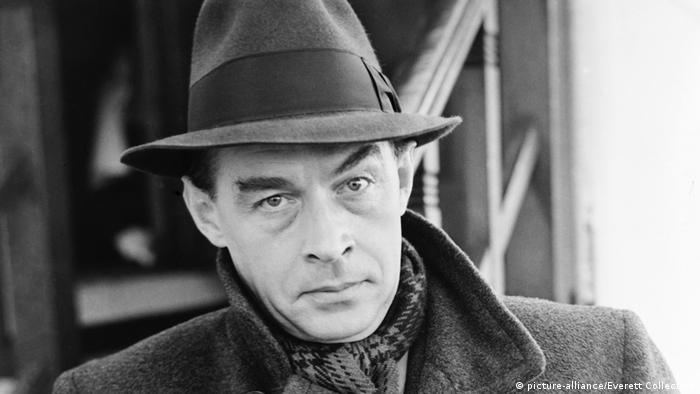 Erich Maria Remarque's book is the portrait of a generation who euphorically left school to go out on the front, but who died in the cogs of the grueling machinery of war.

At the beginning of the 20th century, people were actually yearning for the First World War. It was a period of radical change and insecurity. Technical progress set the pace — factories, cars, scientific discoveries. Cracks were starting to form in patriarchal society. Women were rebelling against prescribed roles and were demanding more rights.

Some things were coming to an end, while innovations were sweeping in at a rapid pace, overwhelming people — particularly men. War, many thought, could be a "purifying force" that would stop, or slow down, change. They celebrating the outbreak of war in summer 1914, and truly believed they would be back home for Christmas. But things developed differently.

"We learnt that a polished tunic button is more important than a set of philosophy books. We came to realize — first with astonishment, then bitterness, and finally with indifference — that intellect apparently wasn't the most important thing, it was the kit-brush; not ideas, but the system; not freedom, but drill."

Everyday life in the trenches

Carnage in the trenches, nights spent with grenades raining down on the soldiers, the boredom between the assaults: Remarque's protagonist, a young recruit, experiences it all. The sensitive pupil becomes a jaded, crumpled being.

"One lance-corporal crawls for a full half-mile on his hands, dragging his legs behind him, with both knees shattered. Another man makes it to a dressing station with his guts spilling out over his hands as he holds them in. (...) you can cope with all the horror as long as you simply duck thinking about it — but it will kill you if you try to come to terms with it."

As dramatically as Remarque depicted the turmoils of war, he himself fought on the front only briefly. As a pupil in 1916, he was drafted into the war, but was wounded soon after and was moved to a military sick bay. There, he listened to the stories of the other badly injured soldiers and took notes, which were later transformed into his world-famous novel. But to boost sales, Remarque claimed to have experienced all the events himself.

All Quiet on the Western Front came out in 1929 and became one of the greatest successes of German literature. Critics around the world celebrated the book as a "pacifist indictment of war." It was turned into a Hollywood film shortly afterward.

Right-wing groups in Germany, on the other hand, believed the memories of their soldiers were being dragged through the mud. After the Nazi seizure of power in 1933, Remarque's book was banned and publicly burned. By then, he had already emigrated to Switzerland. 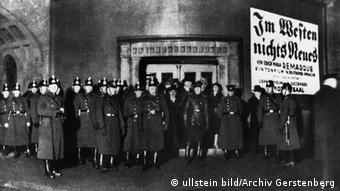 Nazis caused an uproar at the premiere of the film "All Quiet on the Western Front" in 1930; police were called in

Until his death, Remarque enjoyed his image as a pacifist obtained through his early success. But he was not able to bank on that again. Only much later in life did he admit that he had always been an apolitical person.

Erich Maria Remarque was born in Osnabrück to a family that had emigrated from France. He left Germany to live in Switzerland in 1933. His works were scorned by the Nazis, who burned his books. He resided in the US as of 1939. Following World War II, he alternated between the US and Switzerland, passing away in Locarno on September 25, 1970.