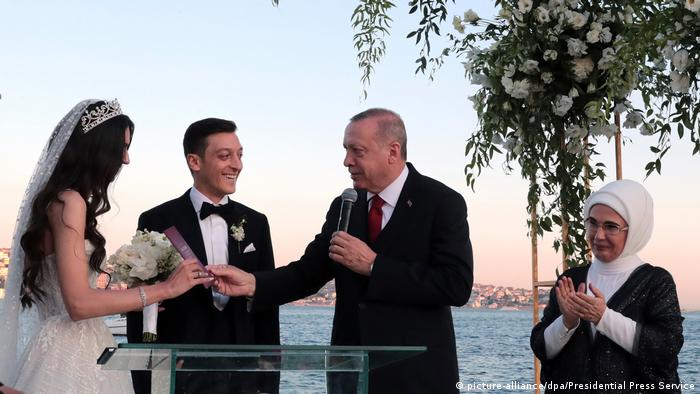 Footage published immediately after the wedding ceremony in Istanbul showed the 30-year-old midfielder dancing with his new bride.

A smiling Erdogan and his wife, Emine, were seen standing next to the couple during the marriage vows at a ceremony in one of the city's most expensive hotels, on the banks of the Bosporus.

The Turkish leader went on to wish the pair "the best of luck."

Erdogan's involvement is likely to create as much publicity as the wedding itself. Özil, who was born in Germany to Turkish parents, drew condemnation last year when he posed for pictures with Erdogan ahead of elections in Turkey and before the World Cup in Russia. The footballer was even booed during World Cup warmup matches, despite scoring.

The fallout from the controversy led him to retire from the national team after Germany's World Cup group stage exit.

Last month, Özil broke fast during Ramadan with Erdogan, further fueling accusations of his support for the controversial leader, who has cemented his position by granting sweeping powers to the presidency and aggressively silencing his critics. 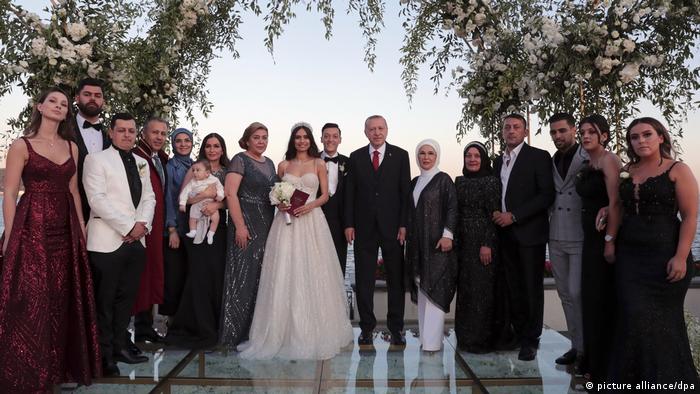 Özil confirmed the wedding in a statement on social media late on Thursday and pledged to pay for the surgeries of 1,000 disadvantaged children to mark his wedding.

"As a professional footballer, I am in a fortunate and privileged position," he wrote. "Amine and I will bear the expenses for surgeries of 1,000 children in need."

He then encouraged further donations for the German medical charity BigShoe, which carries out the surgeries.

Footage later emerged on social media as the official celebrations got underway on Thursday evening, with Özil and Swedish-born Gulse attending a glitzy pre-wedding bash in the city.

The Turkish Red Crescent Society, meanwhile, said Özil had made a large cash donation to the charity that allowed it to distribute food to 16,000 people affected by poverty and war in Turkey and neighboring Syria.

Özil is reportedly English Premier League club Arsenal's highest-paid player but hasn't had an easy season. He's been dropped from the starting line-up, left out of the squad completely and has missed numerous games through injury and illness, as questions surfaced about his commitment.

Toni Kroos had strong words for Mesut Özil, saying that the manner of his departure was "out of order." He also has said that he will carry on playing for Germany after the shock early exit from the World Cup. (16.08.2018)

Turkish President Recep Tayyip Erdogan slammed the "racist" mistreatment of footballer Mesut Özil, saying he spoke with him on the phone. Özil had been heavily criticized for meeting with Erdogan before the World Cup. (24.07.2018)