Istanbul, where the mayoral vote is due to be rerun after presidential pressure, isn't the only place where local election results remain contested. In Turkey's east, several winners have also been shut out of office.

When Gulcan Kacmaz is out and about in her home city of Van, her presence does not go unnoticed. People are quick to recognize her, strike up a conversation and ask for advice. No wonder — the majority of people here view Kacmaz as their mayor.

In the local elections held in her district of Van-Edremit in late March, the 36-year-old ran with the pro-Kurdish Peoples' Democratic Party (HDP). She received almost 54% of votes, winning an absolute majority. But the glory of her victory quickly faded.

"On election night, I was still totally relaxed. When the first results came in, it was already clear that the HDP had won," Kacmaz recalled. "The day after the election, people came to our party headquarters to congratulate me."

But just two weeks later, she learned she would not be allowed to take office. "I was visiting some voters. Later, on my way home, I was reading messages on my phone and discovered that my mandate had been revoked."

Allowed to run, but not hold office

Tukey's Supreme Electoral Board has claimed Kacmaz should not be allowed to serve as mayor because she was dismissed from her job by emergency decree following the attempted coup in July 2016. Despite international criticism, the Turkish government had tens of thousands of state employees detained, fired or suspended.

Kacmaz, who worked as a geography teacher, was also on the list. She still doesn't know why. "I would never have thought that they would refuse me the mayoral mandate because of this. Why should they? After all, the electoral authority did accept me as a candidate," she told DW.

In her district of Van-Edremit, the runner-up of the election — the candidate of President Recep Tayyip Erdogan's Justice and Development Party (AKP) — is now sitting in the mayoral seat. DW arranged an interview with him, but he canceled at the last minute.

'Against the will of the people'

The tension is palpable on the streets of Van. Military vehicles are on patrol in many areas, and soldiers and police officers can be seen everywhere.

More than two months after the disputed vote, people here are still appalled by the election board's decision. "It is simply unjust," said an older woman.

A young man is also quick to voice his opinion: "By denying her the mayoral office, they are going against the will of the people."

Kacmaz protested the decision a few weeks ago in front of the town hall, but it only took a few minutes for the police to hustle her away. An acquaintance captured the incident with a mobile phone.

"The Supreme Electoral Board should be a totally independent institution, but it's not," said Kacmaz. "It's under the AKP's control and has, for that reason, denied us our mandate." She added that the election authority allowed them to run as candidates, only to rule against them later.

The opposition sees this as a deliberate attempt to keep them out of power, with HDP spokesman Saruhan Oluc calling it a "deliberate political conspiracy" on the part of the ruling coalition.

HDP lawmaker Mithat Sancar said the council's decision was a "blow to the will of the voters" and the "future of democracy in Turkey." The HDP has demanded new elections in the affected districts. 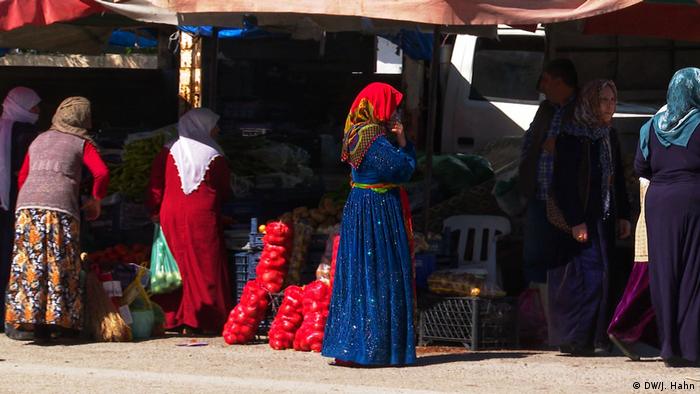 More than 1 million people live in the city of Van, on Turkey's border with Iran

Hayrullah Tanis is the mayor of another of Van's districts — and the only AKP politician in the city willing to comment on the opposition's allegations. He said the AKP's "political opponents deliberately nominated candidates who had been dismissed by emergency decree."

"Our president warned them: 'Do not nominate anyone who has connections to terrorist groups or crime, or those who were sacked from the civil service. If you do — this is what you get," he said.

The HDP is the country's second-largest opposition party. However, Erdogan has accused it of being the political arm of the outlawed Kurdistan Workers' Party (PKK), which has been banned as a terrorist organization not only in Turkey but also in the US and the EU.

In 2016, his government removed 95 of the 102 HDP mayors from office, accusing them of having connections to the PKK. Many of them, as well as hundreds of other supporters and officials, remain in prison.

'They destroyed my old life'

Kacmaz has filed an appeal against the denial of her electoral victory – even though it's unlikely to be successful.

She occupies her time these days helping out at her husband's stationery store. He was also dismissed from the civil service two years ago by presidential decree. Their passports have been confiscated, and they haven't been able to find new teaching jobs, but they're trying to keep their heads above water financially with the small business.

"I lost my job overnight; they destroyed my old life," said Kacmaz. "But that is precisely why I don't want to give up. I want to be there for the people in Edremit. I hope that the unlawful and antidemocratic practices in Turkey will soon end."

Kacmaz's friends have given her a golden nameplate for what should have been her new office, but for now, it decorates the stationery shop. It's one of the few reminders that Kacmaz was recently elected mayor.

The HDP garnered good election results in Turkey's southeast. But the enthusiasm of the party's supporters is limited: They worry the ruling AKP could impose a government administrator on their communities once again. (04.04.2019)

Istanbul's mayoral election will be rerun following an appeal from the strongman-president's party. The exiled journalist Can Dundar gave DW his appraisal of the complex situation leading up to the June 23 election. (08.05.2019)