New Turkish President Recep Tayyip Erdogan says EU membership and democratic reforms are his main priorities, in his first speech as head of state. He took the oath of office earlier on Thursday. 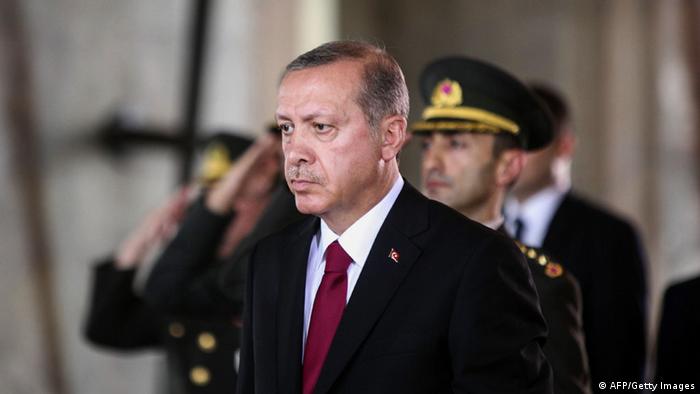 Former Turkish Prime Minister and newly-elected President, Recep Tayyip Erdogan, made his first speech as head of state on Thursday after taking his oath of office in a special session of parliament in the Turkish capital, Ankara.

Addressing dignitaries from some 90 nations in his first speech as president, Erdogan said that the era of the "new Turkey" was beginning.

"Today, the era of the old Turkey has come to a close," he said. The 60-year old went on to pledge that Turkey would continue with reforms in line with the European Union and that the peace process with the Kurdish minority would also be a top priority.

"Turkey's path to the EU, which is a strategic target, will continue more decisively," he said.

Many top western leaders were absent from the ceremony, with the United States, for example, only sending its charge d'affaires in Ankara.

Also missing for the inauguration was Ukraine President, Petro Poroshenko, who canceled his trip to Turkey after citing "Russian troop deployments" in the country's east.

Members of the main Turkish opposition Republican People's Party (CHP) walked out of the swearing-in ceremony in parliament. CHP Party leader Kemal Kilicdaroglu had earlier said he would not attend an event based on "lies."

Erdogan "will pledge allegiance to the constitution but he will lie. I don't want to witness that lie," said Kilicdaroglu.

Erdogan has been accused of authoritarian tendencies by many in the West. His critics believe that his autocratic instincts and "Islamizing" could blur the line between state and religion, leading the EU candidate country ever further away from successfully becoming a member state.

The President's intentions to exercise his full powers of presidency have also raised concerns amongst his political opponents, who fear they may be targeted by more of the heavy-handed measures used by Erdogan in the past to crack down on those who question his politics.

It is likely that Erdogan will go as far as trying to change the constitution after next year's general elections in a bid to empower his position. The Turkish presidency has, in the past, been very much a ceremonial post.

Erdogan was elected on August 10 with 52 percent of the vote in the country's first-ever direct presidential elections. If he remains for the five-year term, it will see him rule Turkey longer than its modern founder, Mustafa Kemal Ataturk. He is permitted to serve two mandates.

Coronavirus: 15% of Germans have been vaccinated, says RKI 3h ago

Far-right AfD calls for 'normal' Germany at conference 5h ago