A series of explosions has injured hundreds of people in the city of Bata in Equatorial Guinea. Many more are feared to be trapped under the rubble, with officials blaming the blasts on "negligence." 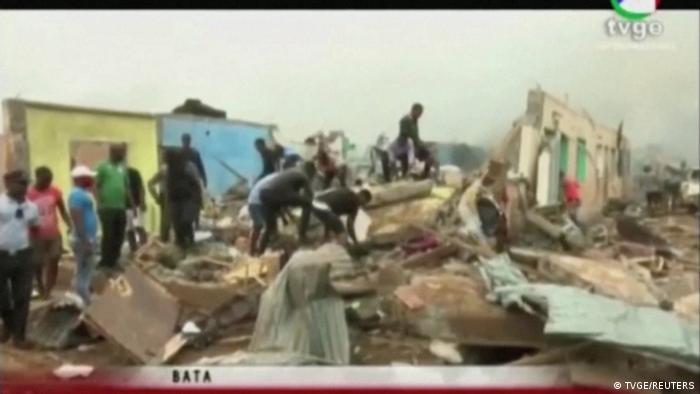 People searched through the rubble following explosions at a military base

Equatorial Guinea's largest city and main economic hub Bata was hit by four explosions on Sunday. A fire at a weapons depot is believed to be the source of the blast.

Officials put the initial death toll between 15 to 20, while at least 500 people were injured in the blasts.

Many were feared dead or trapped under the rubble. The Health Ministry said on Twitter that the explosion occurred at a military barracks, where local media reported that thousands of people had been living.

State broadcaster TVGE reported that practically all of the houses in the military zone, as well as most of the houses nearby, had been damaged by the explosion. Reporters on the ground also reported seeing hospitals full with many wounded women and children

The health department told medical workers to head to hospitals, which were reportedly overwhelmed. 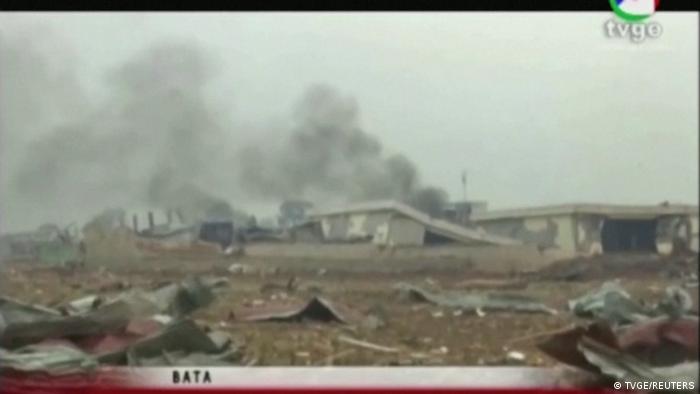 Practically every house in a military housing estate was reportedly destroyed

Longterm president of Equatorial Guinea, Teodoro Obiang Nguema, released a statement that was read over the state television channel TVGE. He said that the accident had been caused by "negligence and inattention" which led to the explosion of military explosives and munitions.

In a communique, the president said the explosion may have been caused by residents burning the fields near the barracks.

He confirmed that the blasts had affected almost all of the buildings in the city.

Obiang announced the launch of an investigation into what happened and also called on the international community to aid with the costly reconstruction at a time when the country is suffering from low petroleum prices and the effects of the coronavirus pandemic.

Local television showed people pulling bodies from rubble, some of which were carried away wrapped in bed sheets.

Phone lines and internet were reportedly down, but some people were able to share unverified images of the destruction on social media.

Another user shared an unverified video that they described as "images of the military barracks of Nkoantoma, Bata, epicenter of the explosion which rocked Bata this afternoon.

A further unverified video, shared on Twitter, showed extensive scenes of destruction and debris in a residential district of the city.

An eyewitness in the city told the Spanish news agency EFE that there had been "a huge explosion, it opened all our windows … We saw a pillar of smoke and then suddenly there was a second explosion and then shortly after, another."

"We don't quite know what happened, but there are soldiers on the street and now we cannot make calls, only those with internet, which is almost nobody here, are connected over WhatsApp," the witness said.