Environmental Impact of Siachen Conflict | Asia | An in-depth look at news from across the continent | DW | 05.01.2010

The Siachen glacier has long been a source of conflict between India and Pakistan, and now ecological problems are causing concern for the whole of South Asia. The glacier is melting and putting millions of South Asians at risk of catastrophic floods, droughts and food shortages, environmentalists warn. 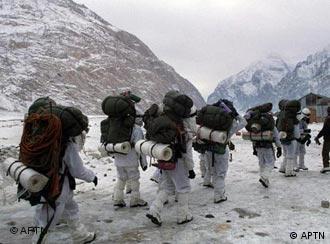 Siachen is the planet's second largest glacier apart from the polar caps and also the world’s highest battleground at some 6,000 metres above sea level. Soon, it could win the title of the world’s filthiest glacier.

In Siachen, the decade-long conflict between India and Pakistan is perpetuated by bullets that whistle over the wild roses and snow leopard dens, endangering the fragile environment.

The intense activity of more than 30,000 soldiers along the 70-kilometre-long glacier, a headwater for major rivers in India, Pakistan and Bangladesh is causing great concern to environmentalists.

Professor Syed Iqbal Hasnain, from India’s Energy and Resources Institute (TERI), believed that the human presence was aggravating the situation, which is already critical because of global warming.

"There is an additional input of warming by the presence of huge armed forces, their machines and their garbage, which goes into the glacier itself,” he said.

The conflict at Siachen is also a "death sentence" for other Himalayan glaciers, said Arshad H Abbasi, a researcher at the Sustainable Development Policy Institute in Islamabad.

He explained that India and Pakistan’s armies have used chemicals to melt and cut through the age-old glacial ice to construct bunkers, helipads and airfields.

“When you cross the actual line of demarcation there are so many troops on the glacier and so many base camps. India has laid a 165-km long kerosene oil pipeline. You would be amazed to see satellite images of these glaciers -- it’s just as if the armed forces have converted them into slums."

This ecological deterioration is gradually poisoning the health of the Himalayan glaciers, which are also known as the “third pole”. Environmentalists also worry about the impact on low-lying countries such as the Maldives and Bangladesh.

Professor Shahnaz Huq Hussain from Dhaka University warned that the governments of both countries should act wisely: “We have to preserve the natural balance. Whatever they have done cannot be rectified, but no more harm should be done."

Peace activists and environmentalists from both India and Pakistan have called for the region to be demilitarised and converted into a peace park.

Shekhar Gupta, the editor-in-chief of the national Indian Express daily, thought that a Siachen peace park “would be a wonderful idea”. He believed it would be great “if the two countries were able to restore faith because Siachen is such an exclusive and rare place and there are not so many glaciers at that altitude that are accessible.”

“Both sides have now set up base camps on either side, which are today used to launch troops, but tomorrow they could be used to launch expeditions.”

In the aftermath of the Mumbai attacks in November 2008 and attempts by India and Pakistan to resolve the problems of terrorism, activists hope that there might be progress towards preserving the natural balance in Siachen in 2010.