Emmanuel Macron goes ahead with pension reforms amid strikes | Germany| News and in-depth reporting from Berlin and beyond | DW | 09.12.2019 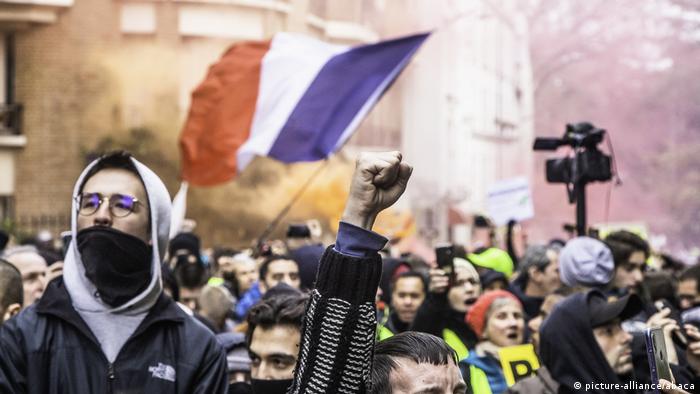 French President Emmanuel Macron and Prime Minister Edouard Philippe convened with senior cabinet ministers late on Sunday to press ahead with the government's proposed pensions reforms despite four days of running protests that have crippled the country's public transport.

The country's labor unions, who claim the reforms will force many to work longer for a smaller retirement payout, began their protest on Thursday, and the mass strike stranded commuters, closed some schools and hit tourism in Paris and elsewhere.

Jean-Paul Delevoye, Macron's coordinator for the pension reforms, is set to unveil the outcome of months-long consultations on Monday, followed by final details of the plan to be announced on Wednesday.

On the first day, some 800,000 people took to the streets in protest at the plan to introduce a single, points-based pension scheme for workers in all economic sectors.

The three main rail unions calling for the action to be stepped up ahead of another general strike and mass protests called for Tuesday.

"In the coming days, we recommend avoiding public transport," said the website of the RATP public train, tram, bus and metro company used daily by some 10 million people in larger Paris to get to work.

Yellow vest activists joined the protests Saturday, adding retirement reform to their list of economic grievances in protests around the country. Police fired tear gas on rowdy protesters at largely peaceful marches through Paris and the western city of Nantes.