Public transport workers in France's capital, Paris, have walked off the job in protest over a planned pension reform. It is the first major action against President Macron's plan for a "universal" pension system. 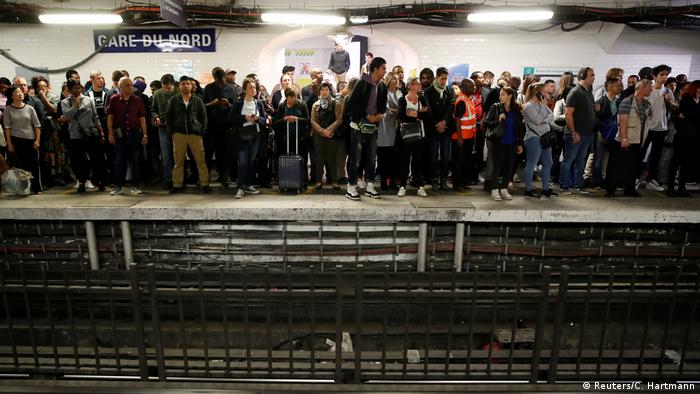 Transport workers in the French capital went on strike on Friday over government plans for a pensions overhaul, triggering traffic jams and leaving many commuters struggling to get to work.

Ten of Paris' 16 subway lines were shut down completely in the morning, along with two of three major regional train lines traversing the city. Most bus and tram services were severely disrupted.

Officials reported double the normal rate of traffic backups during the morning rush hour, with jams totaling some 200 kilometers (125 miles) in length.

The strike comes as the government of President Emmanuel Macron undertakes an attempt to create one single points-based pensions system from the 42 different systems currently in place.

Prime Minister Edouard Philippe said in a speech on Thursday that the overhaul aimed at providing "the same rights for everyone," as opposed to the current variety of schemes that sees some professions gaining more advantageous pensions.

Transport workers fear the reforms would force them to work longer, overturning a decades-old right to earlier retirement to compensate for the taxing nature of their work, which often involves long hours underground.

The average retirement age for workers employed by transit operator RATP is 55.7, whereas most French workers go into retirement at 63, according to France's state auditor, the Cour des Comptes.

"It's not a strike by the privileged few," CGT Union chief Philoppe Martinez told France Info radio. "It's a strike by employees saying: 'We want to retire at a reasonable age with a reasonable pension."

The reforms are being carried out as part of a larger plan by Macron to bolster the French economy. The undertaking has not been popular with many in France who feel the reform agenda is going too fast, and the government has been weakened politically by sometimes violent protests in the last year.

US sanctions Russian research institute over suspicious malware 27m ago