A European Medicines Agency official says he expects the organization to announce a link between the AstraZeneca vaccine and blood clots. The EMA has so far said benefits outweigh the risks. 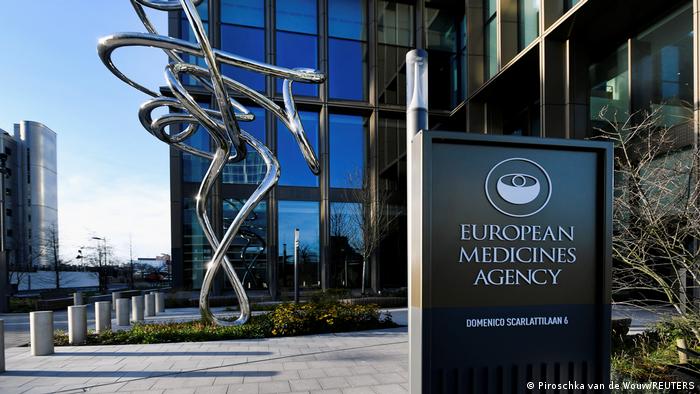 The European Medicines Agency is expected to update its advice as concerns grow about a link between the AstraZeneca coronavirus vaccine and blood clots.

The EMA's head of vaccines said in an interview published on Tuesday that there seemed to be a connection, although it remained unclear how this occurred.

What were the official's comments?

"In my opinion, we can say it now, it is clear there is a link with the vaccine. But we still do not know what causes this reaction," EMA head of vaccines Marco Cavaleri told Italy's Il Messaggero newspaper.

"In the next few hours, we will say that there is a connection, but we still have to understand how this happens," Cavaleri said.

"It is now increasingly difficult to say that there is no cause-and-effect relationship between vaccination with AstraZeneca and very rare cases of unusual blood clots associated with low platelet counts," he added.

The EMA has said a causal link is possible, and that it will provide an updated assessment later this week.

"We are trying to get a precise picture of what is happening, to define in detail this syndrome due to the vaccine," Cavaleri said.

He added: "Among the vaccinated, there are more cases of cerebral thrombosis... among young people than we would expect."

Caveleri did not think the regulator would be in a position this week to indicate for which age range the AstraZeneca shot should be used.

Stella Kyriakides, European Commissioner for Health and Food Safety, said the EMA would provide an updated assessment later on Wednesday.

What does the WHO think?

The World Health Organization (WHO) also expects to reach a fresh assessment on the vaccine on Wednesday or Thursday, after its own vaccine safety advisory group meets. But the body so far does not believe there will be a reason to change its advice that the benefits outweigh any risks.

"What we can say is that the appraisal that we have for the moment — and this is under consideration by the experts — is that the benefits-risk assessment for the vaccine is still largely positive," Rogerio Gaspar, WHO director of regulation and prequalification, told a Geneva news conference.

Meanwhile, a British trial of the AstraZeneca coronavirus vaccine on children has been paused while regulators assess its possible link to blood clots, Oxford University said Tuesday.

The university, which helped develop the shot, said in a statement: "Whilst there are no safety concerns in the pediatric clinical trial, we await additional information from the MHRA [UK medical regulator] on its review of rare cases of thrombosis/thrombocytopenia that have been reported in adults, before giving any further vaccinations in the trial."

The UK's health regulator on Saturday said there were seven fatalities out of 30 people who suffered blood clots after receiving the Oxford-AstraZeneca vaccine. More than 18 million people have received the jab in the UK so far.

Concerns about serious blood clots in a tiny minority of cases have undermined confidence in the AstraZeneca vaccine.

Several EU countries including France, Italy, and Germany — the bloc's three largest countries by population — either suspended or limited the use of the vaccine before the EMA declared that the benefits outweighed the risks and it should remain in use.

British regulators have found 30 cases involving rare blood clot events after the use of the AstraZeneca coronavirus vaccine — 25 more than was reported last month. All the latest here.